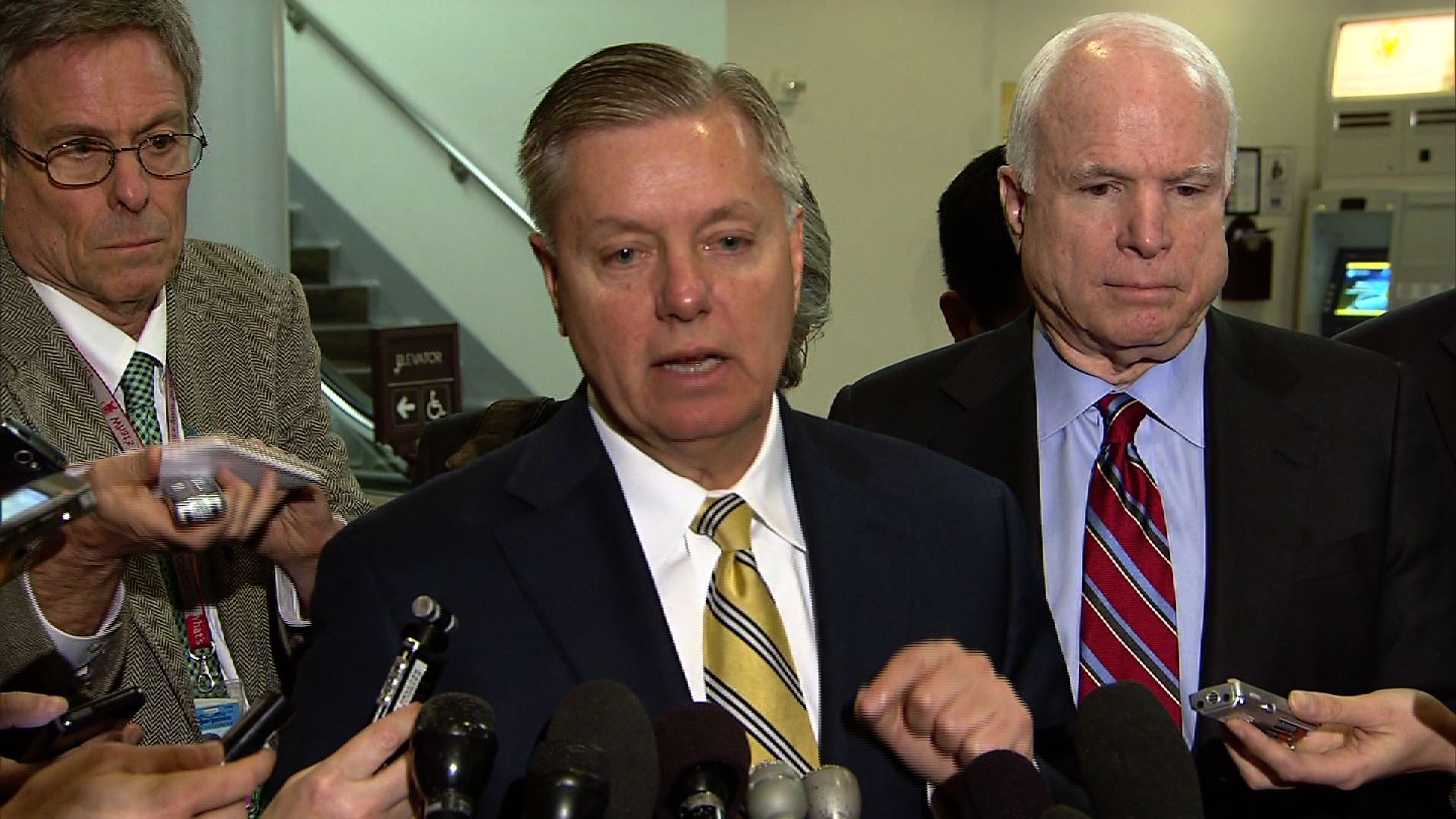 In the nearly two weeks since bombs exploded at the Boston Marathon, one suspect has been apprehended, charged, and transferred to a federal medical detention center; another was killed. But as details emerge about critical events that unfolded before, during, and after the attacks, a growing group of lawmakers is going after the federal government for its handling of the incident - and the mechanisms that might have prevented it.

"Boston is becoming to me a case study in system failure," said Sen. Lindsey Graham, R-S.C., in remarks to reporters Thursday. "Between Benghazi and Boston, our systems are failing and we are going backwards. We need to understand that Bin Laden may be dead, but the war against radical Islam is very much alive, radical Islam is on the march, and we need to up our game."

In the wake of the April 15 bombings, which killed three people and injured more than 260, law enforcement and federal officials combined forces in their efforts to swiftly identify and apprehend potential perpetrators. By Friday, one suspect, 26-year-old Tamerlan Tsarnaev, had been killed in a shoot-out with law enforcement. His younger brother, Dzhokhar Tsarnaev, was apprehended after an 18-hour manhunt.

But in the days since the two brothers were identified as the alleged bombers, evidence has emerged that at least one of them was viewed as a potential threat by both the Russian government and the CIA, and more than one lawmaker has suggested the federal government let the case slip through its fingertips.

"Just look at it from a 30,000 foot point of view: You have Russian intelligence services contacting two agencies within our federal government responsible for our national security - the FBI and the CIA," Graham said Thursday. "They tell us, we believe you have a radical Islamist in your midst. We do some interviews, we do some things that I think are pretty responsible, however this suspected radical Islamist is able to go back to Russia, Dagestan, without the FBI or the CIA being made aware of it, even though Homeland Security was.... We were unable to connect the dots and pick that up. The rest is history."

The chairman of the House Homeland Security Committee, Rep. Michael McCaul, R-Texas, suggested this morning that the system could benefit from a few changes.

"We're going to have to look at -- in term of investigatively -- how we keep these leads on file, maybe keep the databases on file a little bit longer, and how we could keep people like that out of the United States," he said Friday.

The Obama administration has defended the FBI's investigation of Tsarnaev, contending that situation was investigated but yielded nothing actionable. Meanwhile, President Obama has vowed to get to the bottom of the details and motives surrounding the attacks.

In the meantime, however, Democrats and Republicans are pouncing on federal authorities for the arrest of Dzhokhar Tsarnaev, and claims that he was read his Miranda rights too early.

When the 19-year-old Tsarnaev was arrested last Friday following an extensive manhunt, he was questioned for 16 hours before being read his Miranda warning - after which point he reportedly stopped talking.

Upon taking Tsarnaev in, authorities invoked a public safety exception to the Miranda warnings, which allows for a limited questioning period during which public safety is being threatened. But the exception itself is controversial and relatively untested, and some Democrats have questioned its use in this situation.

"I would have thought the public safety exception would have allowed more time for the questioning of the suspect prior to the arraignment and/or advising of rights," Rep. Adam Schiff, D-Calif., told the Associated Press this week.

In an interview on Fox News, Rep. Michele Bachmann, R-Minn., blasted the Obama administration for too quickly filing charges against Dhozkhar, to whom she referred as an "Islamic jihadist," thereby silencing him prematurely.

"Now we have essentially duct tape over the mouth of this terrorist and we can't use him to link together this treasure trove of information," she told Fox's Greta Van Susteren. "The people hurt the most are the people watching your show and innocent Americans all across the United States. That shouldn't be. That's a miscarriage of justice."

As the investigation continues and additional information is uncovered, yet more congressional finger-pointing appears all but inevitable. But so far, the blame game extends outside the U.S., too: Rep. Mike Rogers, R-Mich., the chair of the House Intelligence Committee, accused Russia of holding out on U.S. intelligence gatherers.

"The Russians I think have a lot more information here than they are sharing today," he said on Fox News this week. "They've kind of let us peek under the curtain a little bit, but it's very clear to me that they have valuable information that, A, they should have provided earlier, and B, that we need to get now to understand what happened when he went back to Russia."

"I think the Russians need to cooperate more than they are now to fully understand those six months," he continued. "I just don't think they're there yet."