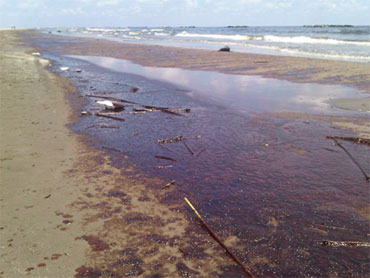 In an interview with Politico.com's Roger Simon on Friday, Mr. Obama likened the effect upon the national psyche of what may become the largest oil spill in history with that of 9/11.

"In the same way that our view of our vulnerabilities and our foreign policy was shaped profoundly by 9/11 . . . I think this disaster is going to shape how we think about the environment and energy for many years to come," Mr. Obama said in an Oval Office interview Friday.

The president said he would make a "bold" push for a new energy law, directing the United States on a course away from its current dependence on fossil fuels. He told Politico that while he couldn't predict whether such a transition would be achieved within his lifetime, the disaster in the Gulf indicated that now is the time to begin the transition and invest in what he called "a new way of doing business when it comes to energy."

"I have no idea what new energy sources are going to be available, what technologies might drive down the price of renewable energies," he said. "What we can predict is that the availability of fossil fuel is going to be diminishing; that it's going to get more expensive to recover; that there are going to be environmental costs that our children, ... our grandchildren and our great-grandchildren are going to have to bear."

The interview came at a time when the White House is pushing even harder on BP to ramp up its containment of the oil spill, which continues to leak tens of thousands of barrels of oil into the Gulf's waters — and onto Gulf States' beaches — per day.

After a 48-hour deadline imposed by the Coast Guard, BP has announced a new containment plan to capture more than 50,000 barrels of oil per day by the end of June (two weeks earlier than they originally intended), and improve redundancy in their capture operations.

As the Gulf crisis enters its 56th day, Mr. Obama is also stepping up his public exposure on the government's response. On Monday he makes his 4th trip to the Gulf Coast with a two-day visit to Louisiana, Mississippi and Alabama.

He will also speak to the nation from the Oval Office on Tuesday about the response efforts; and he has called BP executives to a meeting at the White House on Wednesday to discuss the company's efforts.

He's also canceled a week-long trip to Indonesia and Australia to focus more time on the government's efforts.

In the Politico interview he expressed hope that the right lessons would be drawn from the disaster, admitting that it posed a challenge for presidential leadership beyond his oratorical skills, particularly in capturing the public's imagination and sense of possibility.

"What the public wants to see is us solving this problem," he said. "And that may not make for good TV." Referring to meetings with Cabinet and other administration officials, "looking over maps and figuring out how boom gets someplace," he said that was not "high theater."

But, he said, "ultimately that's going to make the biggest difference in terms of whether or not the Gulf recovers."

Mr. Obama also said that "the overwhelming majority of the American people" have reasonable expectations about the chief executive's response. "What they hope and expect is for the president to do everything that's within his power . . . They don't expect us to be magicians."