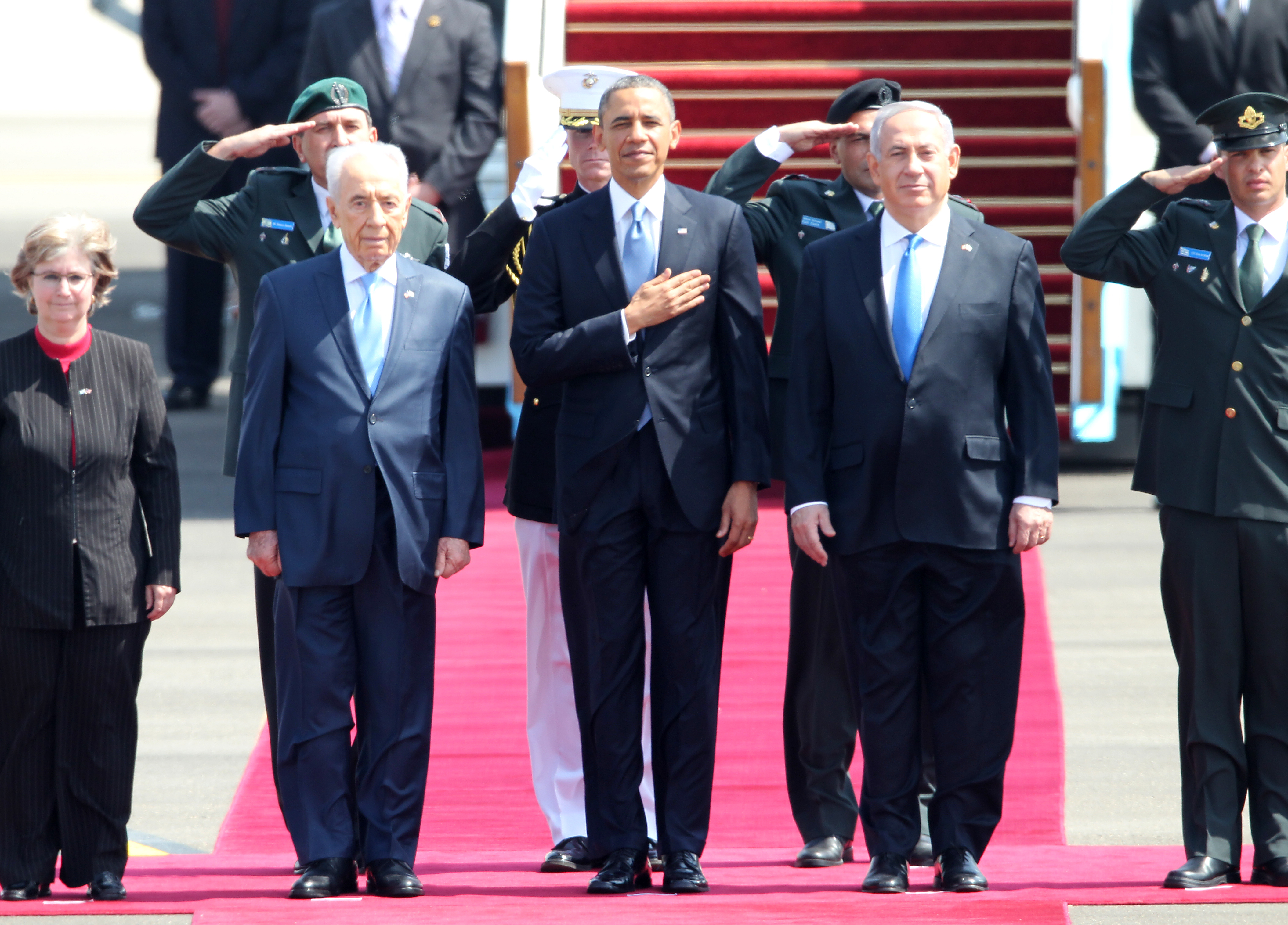 TEL AVIV, Israel President Barack Obama plunged into the turbulent Middle East on a mission aimed primarily at assuring America's top ally in the region and its friends back home that it will not be forsaken amid bitter domestic political squabbles and budget crises in Washington.

But Mr. Obama's trip has been overshadowed by claims that chemical weapons have been used in neighboring Syria, which has been mired in a civil war for more than two years - a development that, if true, could draw the U.S. deeper into the conflict.

The Assad regime and Syrian rebels traded accusations Tuesday that chemical weapons were used in the northern city of Aleppo - claims that could not be backed up by definitive evidence.

President Obama has declared that the use, deployment or transfer of the weapons "red line" that would cause the U.S. and others to become more deeply involved in the Syrian conflict, a claim he reiterated Wednesday during a press conference with Israeli Prime Minister Benjamin Netanyahu.

"We have been clear that the use of chemical weapons would be a serious and tragic mistake," Mr. Obama said.

However when pressed on whether or not reports of Tuesday's alleged chemical weapons attack had crossed that line, the U.S. president was hesitant.

Mr. Obama was clear though that he did not believe reports that anyone but the Assad regime carried out the attack.

"We know the Syrian government has the capacity to carry out chemical weapons attack" and that some within the government have expressed a desire to do so, President Obama said. "I am deeply skeptical of any claim that in fact it was the opposition who used chemical weapons"

Earlier Wednesday, U.S. Ambassador to Syria Robert Ford said there is no conclusive evidence yet that a chemical weapons attack even took place.

"We have no evidence to substantiate the reports that chemical weapons were used, but we are looking very carefully at these reports," Ford told the House Foreign Affairs Committee on Wednesday.

While the White House is sifting through conflicting data and has not reached a conclusion, Rep. Mike Rogers, the chairman of the House Intelligence Committee, said on "CBS This Morning" Wednesday that there was a "high probability" a chemical agent was deployed.

Rogers said the U.S. knows "there has been some forensic evidence that at least small quantities" of chemical agents used, but cited no concrete evidence other than the regime's pattern of escalating attacks, including the firing of Scud missiles into opposition-controlled areas.

Rogers said this is "the time to act. Don't wait until we have 5,000 dead," though he didn't advocate the use of American ground troops, saying "we have lots of capabilities in the United States arsenal, where it wouldn't require boots on the ground ... to remove their capability of using these particular weapons."

A senior Israeli official also said Wednesday that it is "apparently clear" that chemical weapons were recently used in Syria, and that the alleged attack will be a main topic of conversation with Mr. Obama.

Yuval Steinitz, the newly appointed minister of intelligence and strategic affairs, did not say how he came to the conclusion that the weapons were used. He would not comment on whether it was Assad forces or the rebels that used them, saying it was not important.

Israel has repeatedly expressed concern that Syria's chemical arsenal could fall into the hands of anti-Israel militants like Lebanon's Hezbollah, an Assad ally, or an al Qaeda-linked group fighting with the rebels.

Even as some officials suggested the chemical weapons had been used, doubts persist.

"I am extremely skeptical that this was a chemical warfare incident," Jean Pascal Zanders, an expert in chemical and biological warfare, told CBSNews.com. "It may have been a chemical incident - not necessarily a military agent, but an industrial agent. The descriptions (of symptoms) would be totally, totally different to what we've been reading" if one of Syria's known chemical agents had been dispersed.

Zanders and others are drawing parallels between the uncertain claims in Syria and the run-up to the Iraq war, which began 10 years ago this week.

"Until this has been verified as such, there is no need to up the ante," Zanders said.

A U.S. official, speaking anonymously to the Associated Press Tuesday, also said there was no evidence of a chemical attack. Also expressing doubts was the Organization for the Prohibition of Chemical Weapons, which reported no independent information of chemical weapons use.

Some of the dispute may arise over the gray area that exists in the chemical weapons discussion, said Salman Shaikh, the director of Brookings Institution's Doha Center.

Assad's government has been experimenting with possible chemical dirty bombs -- less lethal and less widely dispersed compounds, some derived from their known stockpiles, which could be used to target clusters of opposition forces, Shaikh said.

This may help explain the nuance in recent statements from officials citing chemical "agents" rather than "weapons."

"I think the regime always had the use of chemical weapons and other such substances as an option, and that should be scary enough," Shaikh said. "I have heard that the (Assad) regime has been experimenting with various compounds and mixtures to see how they could use (their known chemical stockpiles) in a localized fashion."

Meanwhile, in Tel Aviv, Mr. Obama joked to Prime Minister Binyamin Netanyahu that he was "getting away from Congress."

Israeli President Shimon Peres welcomed Obama, declaring that "a world without America's leadership, without her moral voice, would be a darker world. A world without your friendship, would invite aggression against Israel."

In a veiled reference to tensions and regime changes in the region, he added: "The winds of change bring both promise and peril."

After an arrival ceremony at the airport, Mr. Obama headed to Jerusalem for meetings with Israeli leaders.

Mr. Obama arrived to face an Israeli leadership and public anxious to hear the president affirm America's commitment to the security of the Jewish state while standing on their soil.

Mr. Obama sparred frequently with Netanyahu over the Palestinian peace process during his first term. And despite public assurances from both sides that relations otherwise remained solid, the president endured four years of criticism from pro-Israel advocates and conservatives in the U.S. and numerous commentators in Israel for not doing enough to back the Mideast's only stable democracy in the face of growing threats to its existence.

So even though U.S. officials have set expectations low and previewed no significant policy announcements, there is a clear metric to measure the success of Mr. Obama's three-day stay in Israel and the West Bank: How much he is able to reverse the perception that his administration is not fully committed to Israel's security.

The centerpiece of the first leg of the trip will be a speech to Israeli university students on Thursday, during which Mr. Obama is expected to renew U.S. assurances to stand by Israel as it seeks to counter threats from Iran and protect its people in the midst of civil war in neighboring Syria, where new questions were raised Tuesday about the Assad regime's possible use of chemical weapons.

Before he left Ben Gurion airport for the 45-minute helicopter flight to Jerusalem, Mr. Obama stopped to view an Iron Dome battery, part of the missile defense system that the United States has poured hundreds of millions dollars into developing. Israeli officials credit Iron Dome with significantly reducing the impact of rockets fired into its territory from militants in the Gaza Strip and Lebanon and don't want to see U.S. funding cut due to budget constraints.

Once in Jerusalem, a potent religious symbol as well as one of the main obstacles to an Israeli-Palestinian peace deal, Mr. Obama will make several cultural stops — to see some of the ancient Dead Sea Scrolls and pay tribute to the founder of modern Zionism — intended to show his appreciation for the Jewish people's millennia-old connection to the land that is now Israel as well as the horrors of the Holocaust. He will also visit the Church of Nativity, which is revered throughout Christiandom as the site where Jesus was born.

Mr. Obama will make an almost perfunctory visit to the cash-strapped Palestinian Authority's headquarters in the West Bank, where he will meet embattled Palestinian President Mahmoud Abbas to assure him that an independent Palestinian state remains a U.S. foreign policy and national security priority. Despite not coming with any new plan to get the stalled peace process back on track, Mr. Obama plans to make clear that his administration intends to keep trying to get talks relaunched.

Preventing Iran from developing a nuclear weapon and the Syrian crisis from spilling over into the broader region are top priorities of Israel and the United States, although they have differed in the past on precisely how to achieve both ends.

Iran, in particular, has been a vexing issue, as Iranian leaders continue to defy pressure from the U.S. and other world powers to prove that its nuclear program is peaceful and not, as many suspect, cover for atomic weapons developments.

Israel repeatedly has threatened to take military action should Iran appear to be on the verge of obtaining a bomb. The U.S. has pushed for more time to allow diplomacy and economic penalties to run their course, though Obama insists military action is an option.

But there are differences over a timeline for possible military action. Netanyahu, in a speech to the United Nations in September, said Iran was about six months away from being able to build a bomb. Obama said last week that the U.S. thinks it would take "over a year or so for Iran to actually develop a nuclear weapon."

Mr. Obama will close out his Mideast trip with a 24-hour stop in Jordan, an important U.S. ally, where his focus will be on the violence in Syria. More than 450,000 Syrians have fled to Jordan, crowding refugee camps and overwhelming aid organizations.

In his talks with Jordan's King Abdullah, Mr. Obama also will try to shore up the country's fledgling attempts to liberalize its government and stave off an Arab Spring-style movement similar to the ones that have taken down leaders elsewhere in the region.