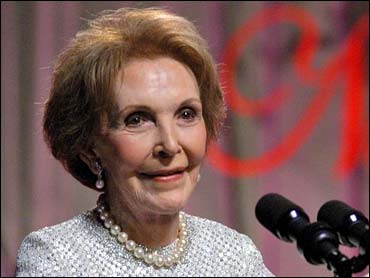 President-elect Obama called Nancy Reagan on Friday to apologize for joking that she held seances in the White House.

At a news conference in Chicago, Obama said he had spoken with all the living presidents as he prepares to take office in January. Then he smiled and said, "I didn't want to get into a Nancy Reagan thing about doing any seances."

The 87-year-old former first lady had consulted with astrologers during her husband's presidency. But she did not hold conversations with the dead.

Obama spokeswoman Stephanie Cutter said the president-elect later called Mrs. Reagan "to apologize for the careless and offhanded remark." She said Obama "expressed his admiration and affection for Mrs. Reagan that so many Americans share, and they had a warm conversation."

It actually wasn't Nancy Reagan who was linked to conversations with the dead; it was Obama's top Democratic challenger for the presidency, Sen. Hillary Rodham Clinton, D-N.Y.

In either case, use of the word "seance" might be overstated.

Nancy Reagan consulted an astrologer to help set her husband's schedule, wrote former White House chief of staff Donald T. Regan. The revelation created a furor and President Reagan even broke with his policy of not commenting on books by former White House staffers.

"No policy or decision in my mind has ever been influenced by astrology," Reagan said.

In his book "The Choice," Washington Post reporter Bob Woodward described how Clinton consulted with a spiritual adviser who led her through imaginary conversations with her personal hero, Eleanor Roosevelt. Newsweek magazine, which was promoting the book, characterized the visits as "seances," a term that White House officials quickly tried to squelch.