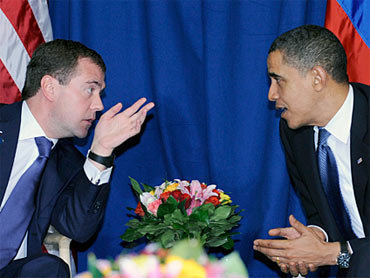 President Obama announced what he called "the the most comprehensive arms control agreement in nearly two decades" on Friday, an agreement with Russia that would cut deployed nuclear weapons by about one third.

"Since taking office, one of my highest national security priorities has been addressing the threat posed to the American people by nuclear weapons," he said, noting his stated goal of a world without nuclear weapons. He said that while that "aspiration will not be reached in the near future," the newly-unveiled agreement -- an updated version of the Strategic Arms Reduction, or START, Treaty -- is an important step in the right direction.

The president spoke with Russian President Dmitry Medvedev on Friday morning (see photo at left), with the two agreeing to meet in Prague on April 8th to sign the treaty. (The two are pictured above at a December meeting in Denmark.) In addition to reducing deployed nuclear weapons, the agreement, which must be ratified by Congress, would reduce ballistic missiles and launchers and "puts in place a strong and effective verification regime," according to Mr. Obama.

Clinton hailed it as "a good day for American and our security" and said she looked forward to working with Congress to ratify the treaty. She said reducing the threat of nuclear weapons is "one of the highest priorities of the Obama administration" and stated flatly, "we do not need such large arsenals."

Clinton also said the agreement sends a message to Iran and North Korea that both the United States and Russia are committed to keeping nuclear weapons "out of the wrong hands."

Mr. Obama said the agreement reflected his commitment to a "reset" in U.S.-Russia relations.

"In many ways, nuclear weapons represent both the darkest days of the Cold War, and the most troubling threats of our time," he said. "Today, we have taken another step forward in leaving behind the legacy of the 20th century while building a more secure future for our children."

The Cold War really is behind us," Clinton added.