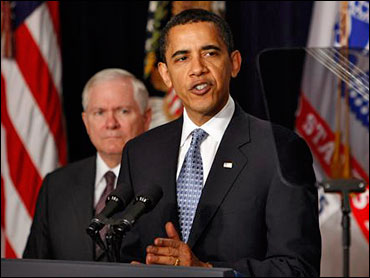 (AP Photo/Gerald Herbert)
President Obama announced this morning that the Department of Defense and the Department of Veterans Affairs will cooperate to launch an electronic system for storage of veterans' healthcare records called the Joint Virtual Lifetime Electronic Record.

The president was joined by Secretary Gates and Secretary Shinseki when he made his announcement. He spoke to leaders from various veterans organizations, veteran patients and healthcare providers from veterans facilities.

Mr. Obama called the initiative a "first step towards creating one, unified, lifetime electronic health record for members of our Armed Services that will contain their administrative and medical information from the day they first enlist to the day that they are laid to rest."

There is currently no way for paperwork to get from the Departments of Defense to the Veterans Administration, the president said, noting that records are often lost or held up.

The president said he has asked both departments to work together for a "simple goal': "when a member of the Armed Services seperates from the military he or she will no longer have to walk paperwork from D.O.D. duty station to a local V.A. healthcenter. Their electronic records will transition along with them and remain with them forever."

The president recieved a hearty applause for this statement.

Mr. Obama also boasted that the 2010 budget includes the "largest single year increase in V.A. funding in three decades" and said that increased spending will total $25 billion dollars over the next five years.

"The care the veterans recieve should never be hindered by budget delays," Mr. Obama said, adding that he and Secretary Shinseki have worked to provide "advanced funding for veterans care" which he hopes will provide "a timely and predictable flow of money from year to year."

Mr. Obama said that the budget increases the number of people covered by veterans healthcare plans and meets the mental and emotional healthcare needs for returning soldiers.

In addition, the president said the 2010 budget provides the resources needed to fully implement the post-9/11 G.I. bill.

"When you come home to America, America will be there for you," the president said to the veterans in closing.