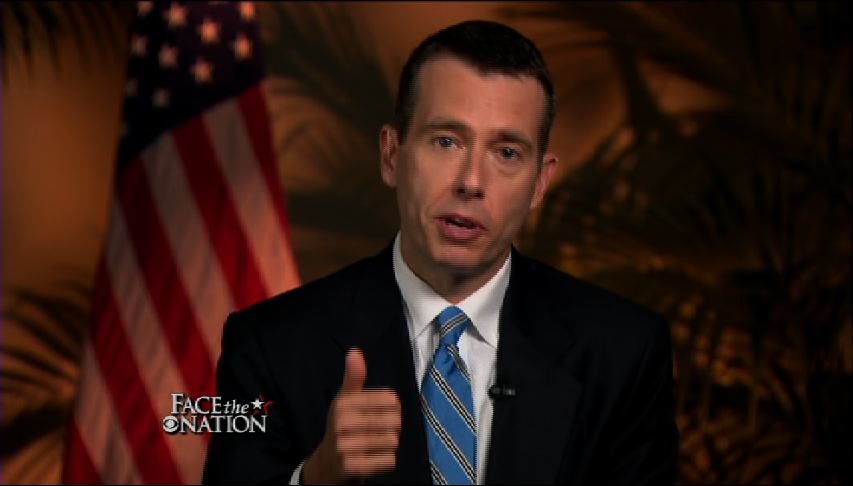 (CBS News) President Obama's top campaign strategist, David Plouffe, blamed Republicans in Congress for not working with the president, and said that "President Obama is the one person in Washington who's very committed to compromise."

"[T]he only way we're going to solve our deficit challenges is to take a balanced approach," Plouffe said Sunday on "Face the Nation."

"[W]e can reform entitlements in a safe way - not by voucherizing Medicare but getting savings out of the system - and ask a little bit more from the wealthy. We can not only deal with the sequester; we can have a long-term fiscal package here that will really help our economy grow," Plouffe added.

"He was running away from them with the kind of pace I guess he ran in that fictional marathon you asked him about," Plouffe said about Ryan's vote for the automatic spending cuts, known as the sequester.

"As you said, he put out a statement praising it. They're acting as if they had nothing to do with this. They voted for this. And this sequester, you know, the way it was dealt with which was to make sure that both defense spending as well as domestic programs were part of the sequester, it's common," Plouffe said about Ryan. "And so the barrier to solving our fiscal challenges, the barrier to the sequester, is Mitt Romney, Paul Ryan, and too many Republicans in Congress - not all, but too many, [refusing] to ask anything of the very wealthy.

"Getting our fiscal house in order, dealing with the sequester [is] very simple: We need compromise," Ploufe said.

The president's adviser, who also ran Mr. Obama's 2008 presidential campaign, said this election is going to send a message to Washington politicians. "I do think one of the messages that's going to come through in this election is, the American people want us to compromise and they want a balanced approach."

Plouffe praised the Democratic convention as a mechanism that will help encourage the Democratic base to vote. "I think we definitely are going to help ourselves in terms of turnout. I think Obama supporters are very energized," he said.

"I think independent voters, what they saw from the president, from President Clinton and other speakers was a plan to move forward," he added. "What they heard from the Republicans was the same old failed recipes.

"We think it's going to be very close in eight or so states. But we think in the battleground states right now - Ohio, Virginia, Colorado, in Florida - where we are today, we've got a small but important lead. And we think that was enhanced coming out of both of our conventions."