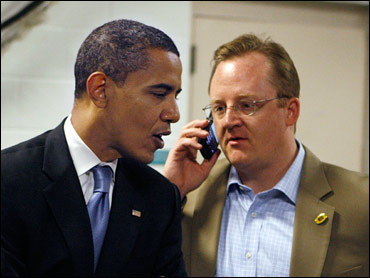 Political Players is a weekly conversation with the leaders, consultants, and activists who shape American politics. This week, as Sens. Barack Obama and Hillary Clinton began their reapproachment, CBS News' Brian Goldsmith talked with Obama Communications Director Robert Gibbs about the Clintons, Sen. John McCain and the road ahead in the campaign.

CBSNews.com: In a phone call with some of his top fundraisers, Senator Obama responded to a question by saying that his donors should push to raise money to cover about $10 million of Senator Clinton's debt. A lot of Clinton contributors are aggravated that your campaign isn't making a stronger effort to reach out to your Internet contributors, for example, to raise that money. Why aren't you doing that?

Robert Gibbs: Well, I think there will be any number of efforts to help resolve the debt issues that the Clinton campaign has. As you mentioned, her donors have asked and Barack has said that if they have the ability to help raise money to relieve or retire that debt, that he encourages them to do so. I don't think we've walled off the parameters of what we would do. But at the same time, I'm not sure we've, in terms of enumerating everything, we'll probably do more of that privately than we will announce it publicly.

CBSNews.com: But why not just send an email to your 1.5 million contributors, asking them to give?

Robert Gibbs: Well, we probably just aren't going to roll out everything that we're going to do on this. But that doesn't mean we're not going to do more to help.

CBSNews.com: There's a new AP poll this week that says that Senator McCain is actually more trusted by the public than Senator Obama on Iraq. What's your response to that?

Robert Gibbs: Look, I think most polling shows that based on the purely Washington definition of the word experience, that Senator McCain scores well. I think, though, if people take a look at what Washington experience has gotten us throughout the nearly three decades of service that John McCain has spent in Washington, or the last eight years of the Bush administration, that they would find a country that a record number of people say is heading in the wrong direction. Our energy problems have, in the last eight years, gotten nothing but worse.

And we're bogged down in a war that Senator Obama believes should have never been authorized and never been waged. If you look at almost every poll, Americans want and seek a change this fall. They want to turn the page from what they've seen in this administration, and get this country moving forward again.

CBSNews.com: But if the public agrees with Senator Obama's position on Iraq, why do you think they're saying that Senator McCain is better to handle the issue? Do you think they just haven't been sufficiently informed about the candidates' positions?

Robert Gibbs: I think both of these candidates are to some degree still getting a lot of information out in front of the voters. And I think we feel comfortable that when people understand where Senator Obama's been on this issue, having the judgment to oppose the war before it started, because he believed that we would take our eyes off of Afghanistan and that the mountain regions along the border that still do house the most heinous terrorists that inhabit this planet.

There's a security situation in that country that is deteriorating every day, and one that allows Osama bin Laden to freely record audio tapes and release them to the world. I think that's a debate that we look forward to having. And I think it's also a debate about whether or not we're going to spend the next 20 or 50 or 100 years in Iraq, setting up permanent bases that even the Iraqis don't want, versus drawing down our troops, in a way that is as careful getting out as we were careless getting in.

CBSNews.com: We get dueling emails from the two campaigns. Your campaign obviously trumpeting the fact that you've got this five to ten to twelve point lead, depending on the poll, over McCain. But McCain's people then pick apart the polls and they say, "Well actually, you're losing independents in almost all of these polls. And traditionally whoever wins independents wins the general elections."

Robert Gibbs: You know, the McCain folks are pretty good at spinning. And I think generally, either you're winning or you're spinning. I think the reason that independent voters are so close in a lot of these polls is you will see a decided Democratic advantage in terms of identification, something we haven't seen in a lot of these polls in many, many years. And the reason for that is that a lot of people that were formerly independent voters have had enough with the past eight years of the Bush administration.

What they see in John McCain's candidacy is the third George Bush term. And a lot of them now are identifying themselves, not as independents, but as Democrats.

CBSNews.com: McCain calls you "Dr. No" on energy, and they point really to three things that you're against: new nuclear power plants, new energy exploration offshore, and you're against their reward for a new kind of electric car. What are you proposing that would actually do more to lower gas prices and energy prices for Americans now?

Robert Gibbs: In October of last year, we rolled out the most comprehensive energy plan that any candidate had in either the primary or now in the general election.

Talking about the technology for a better battery that would allow a plug-in hybrid or an electric car to go 40 or 50 miles, without recharging, is not something that Barack Obama discovered this week. It's something he's been talking about for several years. So I would put our plan to significantly reduce our dependence on foreign oil, to eliminate our dependence whatsoever on oil that we import from dictators in the Middle East, against John McCain's plan that both John McCain and his own economist have said will do virtually nothing to change the price of gas.

The very things that we need to begin to wean ourselves from foreign oil, to drive down the demand that we have for gas, thus easing the price [were in a 2005 energy bill]. We voted for that bill. John McCain voted no on that bill. John McCain said no to windpower. John McCain said no to geothermal power. He said no to solar power. He said no to alternative fuels. And that same year, in 2005, he voted against increasing fuel mileage standards, which, by all accounts, would have an impact now on the demand for gasoline. Not wait 10 or 20 years for oil from the outer continental shelf.

CBSNews.com: But didn't McCain oppose that bill, along with Hillary Clinton and others, less because of the incentives for alternative energies and more because they thought it was just larded up with a lot of subsidies, including to oil companies?

Robert Gibbs: You can certainly ask John McCain why it is that he voted against it. We obviously talked about the fact that this was not a perfect bill, and that we would work and have worked to try to get rid of subsidies for oil companies. John McCain's tax plan gives $4 billion worth of subsidies right now to oil companies.

But you can't go to a wind project in Oregon and talk about how these are the steps you'd take to wean ourselves off of the dependence on foreign oil when three years ago, you had a chance to put your money where your mouth is, through investment tax credits that allow these projects to actually be sustainable. And vote no, yet at the same time, in the throes of a presidential election, decide you're for energy independence. That is the same kind of convoluted doubletalk that we've had for 30 years in Washington.

CBSNews.com: The McCain campaign is also criticizing you for what they call flip-flops on a couple of issues. The first is on public financing. They say that Obama raised his hand at a debate, he signed a pledge for public financing. He promised to sit down with McCain to negotiate a deal and that never happened. There was a conversation between the two lawyers that is disputed on all sides. What's your response to this idea that he's changed his position?

CBSNews.com: Well, nobody believes more strongly in public financing for political campaigns than Barack Obama. And I think that's evident in the fact that even the most ardent supporters of campaign reform acknowledge that the presidential funding system is broken. And that's why they've introduced legislation to change it, legislation that Barack Obama supports, but legislation that John McCain has yet to lend his name to.

What Barack Obama said was that if he could work out an agreement with whoever the Republican nominee was, to put serious limits on the amount of spending that we would have in this campaign, that he would be introduced in talking with whoever that candidate was. It was abundantly clear after a meeting of the respective counsels of each of these campaigns that the McCain campaign had absolutely no desire. And you can see it in their comments, regarding the type of money that they're raising for the Republican National Committee, and how giddy they are about that. They had no desire to enter into any significant closing of spending loopholes.

Robert Gibbs: Obviously, in the heat of a campaign, you get pretty hot. But what is important is, unlike John McCain, his positions don't change. He still believes, he said this for years, that what we need to do is add to NAFTA enforceable labor and environmental standards. Not as part of the side agreements that can be ignored, but as a part of the trade agreement. And those are the changes that he has said he will seek.

CBSNews.com: Chairman Dean, Speaker Pelosi, some prominent figures in the media have said that there was some sexism in the press coverage towards Senator Clinton. Did you see that in the Obama campaign? Do you believe that that happened?

CBSNews.com: We have reported that Hillary Clinton may have moved on, but Bill Clinton is still deeply upset and embittered about how he perceives the Obama campaign to have treated him and his record, that there's a sense that you all went out of your way to portray some of his comments as racially prejudiced. Do you think that President Clinton's comments, over the course of the primary campaign, crossed the line into racial prejudice?

Robert Gibbs: Again, a lot of this is water under the bridge. Obviously, we had a very hard fought primary campaign. And there isn't anybody on the planet that would begrudge President Bill Clinton for vigorously supporting his wife, much as I don't think people are surprised to find out that Michelle Obama supported Barack.

I think that, and we are happy to have the support of the former president, it's an important endorsement. And he is an important voice on any number of issues that I think will be a huge help to Barack Obama and to the Obama campaign in the fall. We have tremendous respect for the former president and for what he was able to accomplish in eight years in the White House.

CBSNews.com: But do you think his rhetoric crossed the line?

Robert Gibbs: I tend just not to get into what might have happened in January or February. I think we've sort of put an end to the primary. I think what united the two campaigns, the two Democratic campaigns, was always far greater than whatever divided us.