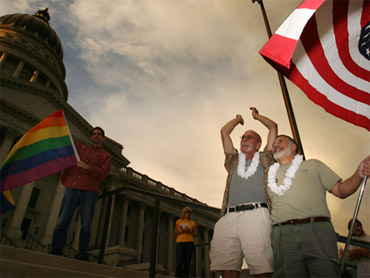 In a decision described as "shocking" and "breathtaking," the Obama administration announced this afternoonthat the Justice Department will no longer defend the Defense of Marriage Act, a federal law that defines marriage as a union between a man and a woman.

The highly unusual move hands gay rights advocates a major victory they have worked years to secure--but is also certain to provoke intense controversy and trigger a heated political battle with Congressional Republicans, who support the law and have refused to repeal it.

The Justice Department is tasked with defending laws passed by Congress--even those laws the sitting President may not like or have supported. Only a few times in history has a President decided his Justice Department will not defend an existing federal law. In those rare circumstances, the House of Representatives can step in and have its lawyers defend the law in court.

President Obama decided the Justice Department no longer would defend DOMA after concluding the law was unconstitutional, administration officials said. Attorney General Eric Holder notified House Speaker John Boehner of the President's decision in a letter today, explaining that the administration believed the law violated equal protection principles, because it treats gays and lesbians differently than heterosexual couples. The government, he said, has no compelling reason for doing that.

"This is a rare case where the proper course is to forgo the defense of this statute," Holder said in the letter.

But the decision represents an about-face for the administration, which for two years had defended the statute against legal challenges by same-sex married couples. Holder said two new lawsuits had prompted the President and the Justice Department to "conduct a new examination" of the law, which blocks entitlement of federal benefits even in states where gays and lesbians have a right to marry.

Maggie Gallagher, chairman of the National Organization of Marriage, called the decision a "truly shocking extra-constitutional power grab" and a "defection of duty" by the President. But she also said the administration had not been forcefully defending the law in court for some time.

"The good news is this now clears the way for the House to intervene and to get lawyers in the court room who actually want to defend the law, and not please their powerful political special interests," Gallagher said.

But former Clinton Administration official Walter Dellinger said Obama's action was "respectful of the rule of law and a step forward for equality."

Dellinger wrote a comprehensive memo on the issue in 1994, when he was serving as an assistant attorney general in the Clinton Justice Department. He said when the President should presume laws are constitutional. But if he concludes that the law is unconstitutional, and the Supreme Court likely would agree, Dellinger said "the President has the authority to decline to execute the statute."

On that advice, President Clinton refused to defend a federal law that would have kicked service members who were HIV positive out of the military.

Unlike DOMA, however, that law never took effect and was never enforced. DOMA was passed by Congress and signed into law by President Clinton in 1996, and has withstood court challenges--all of which makes Obama's decision even more extraordinary.

"This is quite a breathtaking development," said Richard Socarides, president of Equality matters and a former Clinton White House adviser on civil rights. "It is so unusual, and it takes quite a bit of courage to stand up to your critics. This sends a strong signal he sees the country is willing to accept gays and lesbians as full citizens in every respect, including the right to marry."

Socarides said the decision means Obama's campaign rhetoric now will match his governing. During the presidential campaign, Obama was on record opposing DOMA.