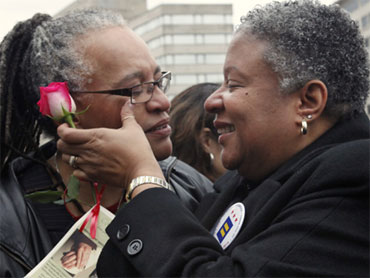 President Obama has instructed the Justice Department to no longer defend the constitutionality of the Defense of Marriage Act, or DOMA, the legal prohibition on federal recognition of same-sex marriages.

Attorney General Eric Holder said in a statement that the  department will stop defending the policy because it has now been challenged in the Second Circuit, "which has no established or binding standard for how laws concerning sexual orientation should be treated."

"After careful consideration, including a review of my recommendation, the President has concluded that given a number of factors, including a documented history of discrimination, classifications based on sexual orientation should be subject to a more heightened standard of scrutiny," he said. "The President has also concluded that Section 3 of DOMA, as applied to legally married same-sex couples, fails to meet that standard and is therefore unconstitutional. Given that conclusion, the President has instructed the Department not to defend the statute in such cases. I fully concur with the President's determination."

In a separate letter to House Speaker John Boehner, Holder wrote that "the legislative record underlying DOMA's passage contains discussion and debate that undermines any defense under heightened scrutiny."

"The record contains numerous expressions reflecting moral disapproval of gays and lesbians and their intimate and family relationships - precisely the kind of stereotype-based thinking and animus the Equal Protection Clause is designed to guard against," he said.

Boehner spokesman Michael Steel said in a statement to CBS News that Mr. Obama will have to explain to the American people why, despite a desire for lawmakers to focus on the still-struggling economy, "he thinks now is the appropriate time to stir up a controversial issue that sharply divides the nation."

Holder said that despite the decision, his department will "remain parties to the cases and continue to represent the interests of the United States throughout the litigation." He added that members of Congress can still elect to defend the statute and that Justice will "work closely with the courts to ensure that Congress has a full and fair opportunity to participate in pending litigation."

White House Press Secretary Jay Carney said that enforcement of the policy will -- at least for now -- continue.

Still, the reversal is a major victory for gay rights advocates. After a district judge ruled in July that DOMA is unconstitutional, Justice announced it would appeal the ruling, arguing it has an obligation to defend all federal laws. That angered the gay rights community, which was quick to note President Obama's campaign promise to repeal the policy.

The administration stood by its position despite the criticism, filing a brief in January defending DOMA. The brief argued that DOMA "is supported by an interest in maintaining the status quo and uniformity on the federal level, and preserving room for the development of policy in the states."

A 2009 Justice Department brief defending DOMA caused particular anger in the gay community, in part for referencing a case involving "marriage of uncle to niece" to support maintaining the policy.

The change in policy comes roughly two months after Mr. Obama signed a bill allowing for the military's "don't ask, don't tell" policy to be ended, a moment he cast as a move toward equality for all Americans. He has said twice in recent months that while he still opposes same-sex marriage, his position is "evolving."

Jay Carney, the White House press secretary, said Wednesday that the president is still "grappling" with his stance on the issue despite the decision. Carney said the president has always seen DOMA as "unnecessary and unfair."

DOMA, which was passed in 1996 under then-President Bill Clinton, mandates that the federal government not recognize same-sex marriages and that states not be forced to recognize same-sex marriages from other states. Section 3 -- the section spotlighted by Holder -- prevents married same-sex couples in Massachusetts and other states from filing joint federal tax returns, among other federal spousal benefits.

In his statement, Holder said the decision came in part because the Justice Department does not necessarily see support for DOMA as reasonable.

"The Department has a longstanding practice of defending the constitutionality of duly-enacted statutes if reasonable arguments can be made in their defense," he said. "At the same time, the Department in the past has declined to defend statutes despite the availability of professionally responsible arguments, in part because - as here - the Department does not consider every such argument to be a 'reasonable' one. Moreover, the Department has declined to defend a statute in cases, like this one, where the President has concluded that the statute is unconstitutional."

The reversal comes less than one month before the March 11th filing deadline for the administration to take a position on a DOMA-related case, one of four pending cases.

"Much of the legal landscape has changed in the 15 years since Congress passed DOMA," Holder concluded in his statement. "The Supreme Court has ruled that laws criminalizing homosexual conduct are unconstitutional. Congress has repealed the military's Don't Ask, Don't Tell policy. Several lower courts have ruled DOMA itself to be unconstitutional. Section 3 of DOMA will continue to remain in effect unless Congress repeals it or there is a final judicial finding that strikes it down, and the President has informed me that the Executive Branch will continue to enforce the law. But while both the wisdom and the legality of Section 3 of DOMA will continue to be the subject of both extensive litigation and public debate, this Administration will no longer assert its constitutionality in court."