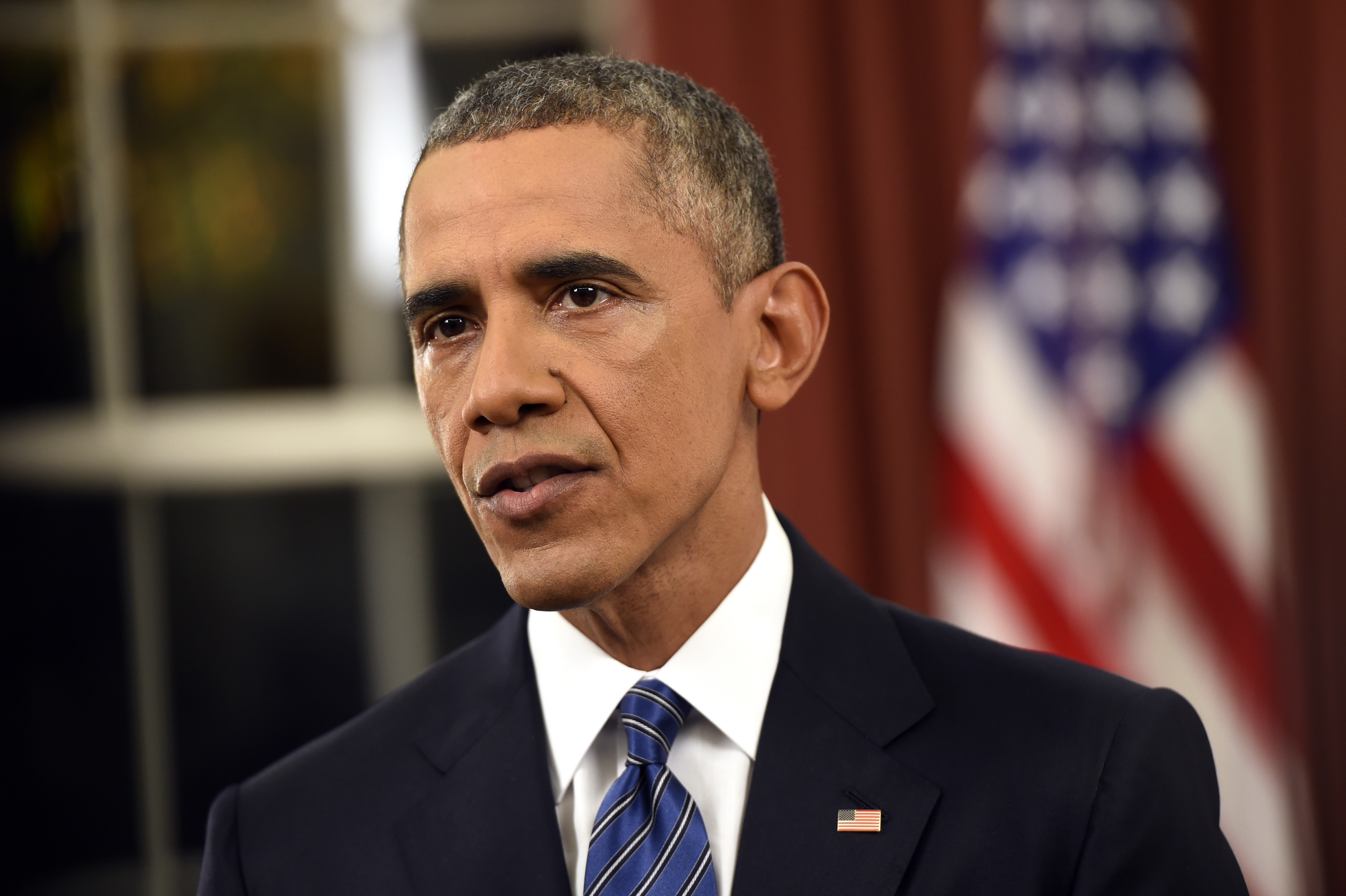 Addressing the nation four days after a shooting in San Bernardino, California had unnerved Americans, President Obama pledged Thursday that the homeland would be protected, and urged Congress to take action on several fronts.

"The threat from terrorism is real, but we will overcome it," Mr. Obama said. "We will destroy ISIL and any other organization that tries to harm us," he said, using an alternate acronym for the Islamic State of Iraq and Syria (ISIS).

At the same time, he asked Americans not to turn against Muslim friends and neighbors and turn the conflict with ISIS into a war against Islam.

The San Bernardino attacks left 14 people dead and renewed concerns about the ability of ISIS to attack people on U.S. soil after revelations that the female attacker in the shooting, Tashfeen Malik, had pledged allegiance to the leader of ISIS online.

Malik, 27, was a Pakistani who came to the U.S. in 2014 on a fiancee visa. Her husband, Syed Farook, a 28-year-old health inspector for the county, was born in Chicago to Pakistani parents and raised in Southern California.

"Each of them served their fellow citizens. All of them were part of our American family," the president said of the victims.

He said that so far, there was no indication that the attack was directed by a terrorist organization overseas or that they were part of a larger conspiracy at home.

"But it is clear that the two of them had gone down the dark path of radicalization, embracing a perverted interpretation of Islam that calls for war against America and the West," he said. "This was an act of terrorism designed to kill innocent people."

Mr. Obama did not announce major changes to his plans to fight ISIS, even though that strategy came under question after the group claimed responsibility for a major terrorist attack in Paris last month in which gunmen killed 130 people around the city. He said the current strategy is supported by military and counterterrorism experts.

"We constantly examine our strategy to determine additional steps to get the job done," he said.

Mr. Obama said the terror threat has evolved since the days of the 9/11 attacks and outlined a four-pronged strategy: hunt down terrorist leaders in every country where they are; provide training and equipment to Iraqi and Syrian forces fighting ISIS on the ground; stop ISIS operations, financing and recruiting; and establish a ceasefire and political resolution to the Syrian civil war.

"Our success won't depend on tough talk or abandoning our values or giving into fear. That's what groups like ISIL are hoping for. Instead we will prevail by being strong and smart, resilient and relentless, and by drawing on every aspect of American power," he said.

Mr. Obama called on Congress to take several steps: Pass legislation banning those on the no-fly list from purchasing a gun, reduce the accessibility of assault weapons, enhance screening for visa waiver entrants and pass an Authorization for the Use of Military Force (AUMF) that is specific to the fight against ISIS.

The White House has already taken some steps to strengthen security for the visa waiver program, which allows people from 38 countries to travel to the U.S. without obtaining a visa in advance. It announced last week it would take steps to evaluate whether potential travelers in the program have traveled to countries deemed terrorist safe havens.

Previous attempts at working on an AUMF to Congress fizzled after House Speaker John Boehner expressed discontent with the initial draft from the White House. Plus, there has been widespread agreement that the 2001 AUMF granting the White House the authority to fight al Qaeda also covers the fight against ISIS.

"If Congress believes, as I do, that we are at war with ISIL, it should go ahead and vote to authorize the continued use of military force against these terrorists," Mr. Obama said. "I think it's time for Congress to vote to demonstrate that the American people are united and committed to this fight

The president spent the final part of his speech focusing on what the country would not do as he reiterated a pledge to avoid a "long and costly ground war" in Iraq or Syria. He also implored Americans not to turn on all Muslims.

"We cannot turn against one another by letting this fight be defined as a war between America and Islam. That too is what groups like ISIL want. ISIL does not speak for Islam. They are thugs and killers, part of a cult of death," the president said, noting that the "vast majority" of terror victims around the world are Muslim.

He called it the "responsibility of all Americans of every faith to reject discrimination," religious tests for entrance to the country or proposals to treat Muslim Americans differently.

"That does not mean denying the fact that an extremist ideology has spread within some Muslim communities. That is a real problem that some Muslims must confront without excuse," the president said. He argued the U.S. should "enlist" Muslim communities as allies in the fight.

"Muslim Americans are our friends and our neighbors, our coworkers, our sports heroes, and yes, they are our men and women in uniform who are willing to die in defense of our country. We have to remember that," he said.

A senior administration official explained that the president felt compelled to address the nation Sunday "because of the attacks in Paris, followed by the shooting in San Bernardino, which clearly raised people's concerns about the nature of the terrorist threat that we face." And the California attack last week is being investigated now as "an act of terrorism," the official said. "We do see that they went down a path of radicalization and that they had stockpiled weapons with the intent to kill innocents on a substantial scale."

This was only the president's third speech from the Oval Office. His last address from this room was in 2010.