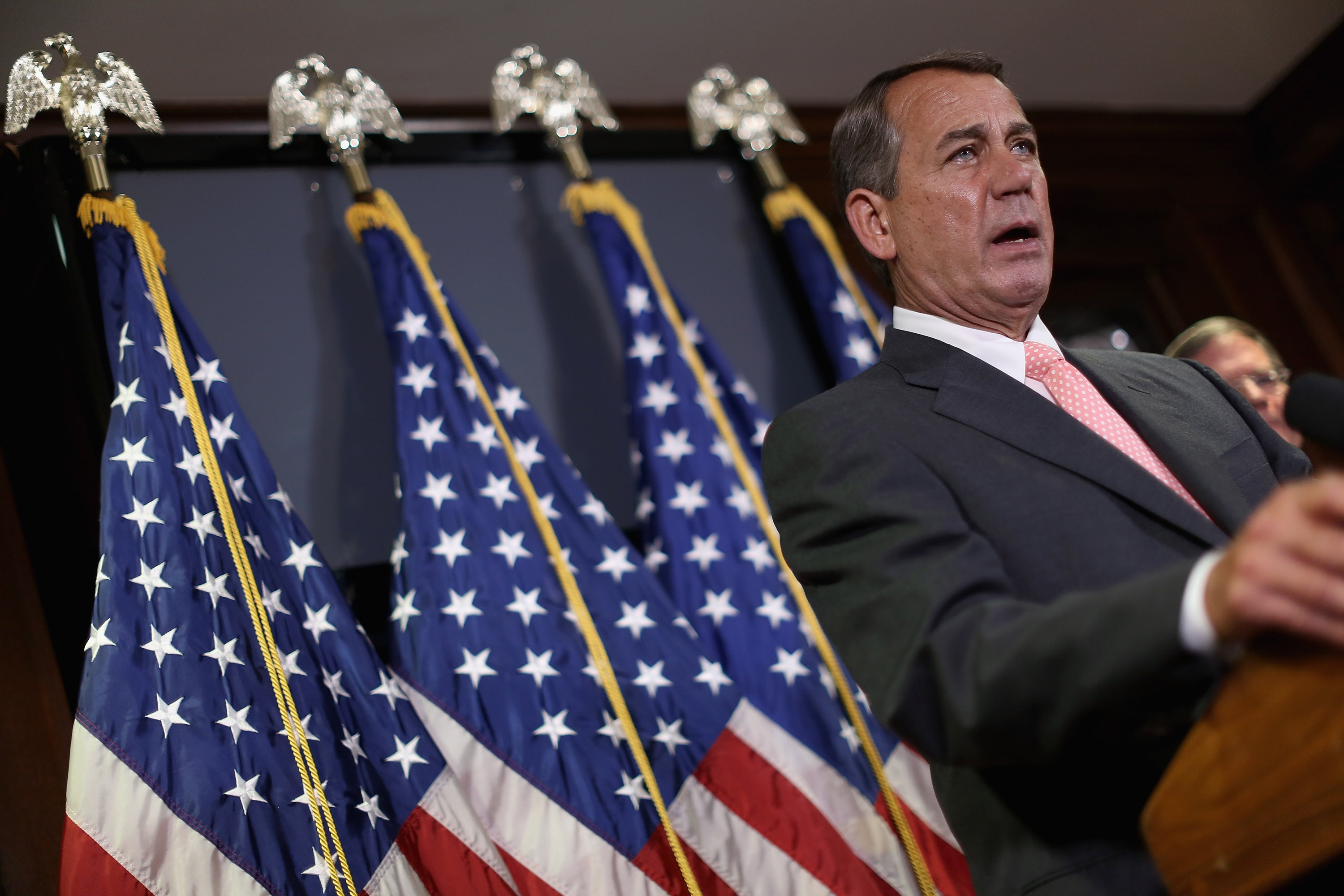 Things never looked good for President Obama's request for military authorization to fight the Islamic State of Iraq and Syria (ISIS). The White House didn't even send the legislation to Congress until February, six months after it started bombing ISIS targets in Iraq. Then another three months passed while other priorities, including legislation giving Congress the power to review the Iran nuclear deal and a bill to fast-track a pending trade deal took precedent.

But what may have been the nail in the coffin was a request from House Speaker John Boehner, R-Ohio, Tuesday that the president tear up the current authorization for the use of military force (AUMF) and try again.

Boehner has argued for months that the administration doesn't have a strategy to fight the Islamic militants. And there's a divide between Democrats and Republicans: liberal members are wary of an open-ended commitment that gives the president, both present and future, the broad ability to wage war. Republicans, meanwhile, think the president needs broader authority than he has asked for to defeat ISIS.

But for some lawmakers, those objections don't justify Congress' inaction.

"I think we're at risk of losing our institutional power to authorize and conduct war, so the stakes here constitutionally are much greater than the issue itself," Rep. Tom Cole, R-Oklahoma, an advocate of passing an AUMF, told CBS News. Cole said he agrees with Boehner that Obama needs a more coherent strategy, but he believes that Congress will be better equipped to push for changes in the strategy once they give the president formal authorization for the war against ISIS.

"I'm not critical of the speaker and I would like a different kind of resolution, but I think the best way to get there is to simply start acting," he said.

Cole joined Rep. Adam Schiff, the top Democrat on the House Intelligence Committee, in writing a letter to Boehner last month urging him to bring the AUMF up for debate and a vote. Just 28 of their colleagues in the House signed on.

"I think many lawmakers don't think there's anything to be gained and a lot to be risked by voting for a war authorization measure, particularly a war as messy as this one," Schiff told CBS News. "There's a great deal of apathy when it comes to fulfilling our constitutional responsibility of either declaring war or refusing to authorize a war."

Both Cole and Schiff say it was problematic that the administration has always taken the position that it wants but does not need the AUMF to fight the Islamic State. From the time airstrikes began in August 2014, White House officials have said that old use of force resolutions from 2001 and 2002 - which were designed to carry out both the fight against al Qaeda and the war in Iraq - give the president the legal authority he needs.

"Once you start the process the wrong way, the idea that anybody wants to step up once you're in it, they wonder, 'well is it simply an academic exercise? Am I running a political risk for something that doesn't matter anyway?'" Cole said. Schiff said he believes the White House, is "reluctant to use a lot of its capital to advance something doesn't believe legally it needs."

But ISIS has been making inroads. It drove the U.S.-trained Iraqi military out of Ramadi, a city 70 miles west of Baghdad, on Sunday, while the debate over war authorization remained mired in a round of finger-pointing and uncertainty about what happens next.

"He's the speaker of the house and he's blaming the president for something not moving through Congress," White House Press Secretary Josh Earnest told reporters Tuesday after Boehner called for new legislation. Earnest argued that the White House not only crafted the language at Boehner's demands, but had "dozens of conversations and at least a dozen meetings" with members of Congress during the fall and winter as they crafted the proposal.

"The fact is that it's the responsibility of Congress to send a clear signal to the world, to our enemies and to our men and women in uniform that the United States Congress is committed to the effort to degrade and ultimately destroy ISIL," Earnest said. "When it comes to making their voice heard and fulfilling their constitutional responsibility to do that, Congress and their leadership in both parties has been AWOL."

Despite their belief that Congress will face long-term consequences for inaction, neither Cole nor Schiff sounds optimistic about the prospect for movement. Cole suggested it might take a lot of angry constituents to get things moving. Schiff said the House Foreign Affairs or Senate Foreign Relations committees would need to start moving legislation themselves - or there would need to be "a change of heart in the Speaker's office."

House Foreign Affairs Committee Chairman Ed Royce echoed Boehner, saying in a statement, "We still need more information from the Administration." The top Democrat, Rep. Eliot Engel, agreed that the legislation must go through that committee - but that first, "we've got to hear from the speaker."

He argued Boehner's comments were helpful because they thrust the discussion about military authorization back into the spotlight. And though Engel said Congress should strike a balance between giving Mr. Obama and future presidents a blank check and tying their hands, he also suggested the issue needs more time to evolve.

Asked why the Foreign Affairs Committee hadn't started to debate the AUMF sooner, Engel said, "I think we weren't ready for it. Before you can just do a markup and throw an idea out and see what develops, you've got to figure out what you want."

Sen. Tim Kaine, D-Virginia, said the Senate Foreign Affairs Committee could be more fertile ground, especially after it managed to craft the the Iran Nuclear Review Act into a bill that drew broad bipartisan support.

"The pressure is on us, starting in Foreign Relations, to try to do something bipartisan, and hopefully have that pick up momentum on the Senate floor," he told CBS News.

Kaine said that the committee's chairman, Sen. Bob Corker, R-Tennessee, and top Democrat, Maryland Sen. Ben Cardin, are both "very interested" in finding a way to write an AUMF that has bipartisan support.

Corker also warned at a Christian Science Monitor breakfast last week that, "What I don't want to do is go through a process that indicates to the rest of the world that somehow the United States is somehow divided on the issue of dealing [ISIS]. I don't want to do that. I don't think that is a good thing for our country."

"On the other hand, I understand that if there is a path forward, where you can complete the process successfully, it is something worthy of pursuing," he said. But it would require resolving the tensions between Democrats who want to limit the authority of a future president and Republicans who believe that supporting the current AUMF is tantamount to "embracing a non-strategy in Syria."

It's not an easy path, Kaine acknowledges.

"I think Congress is afraid to cast hard votes and there's no harder vote than a vote on war," he said.