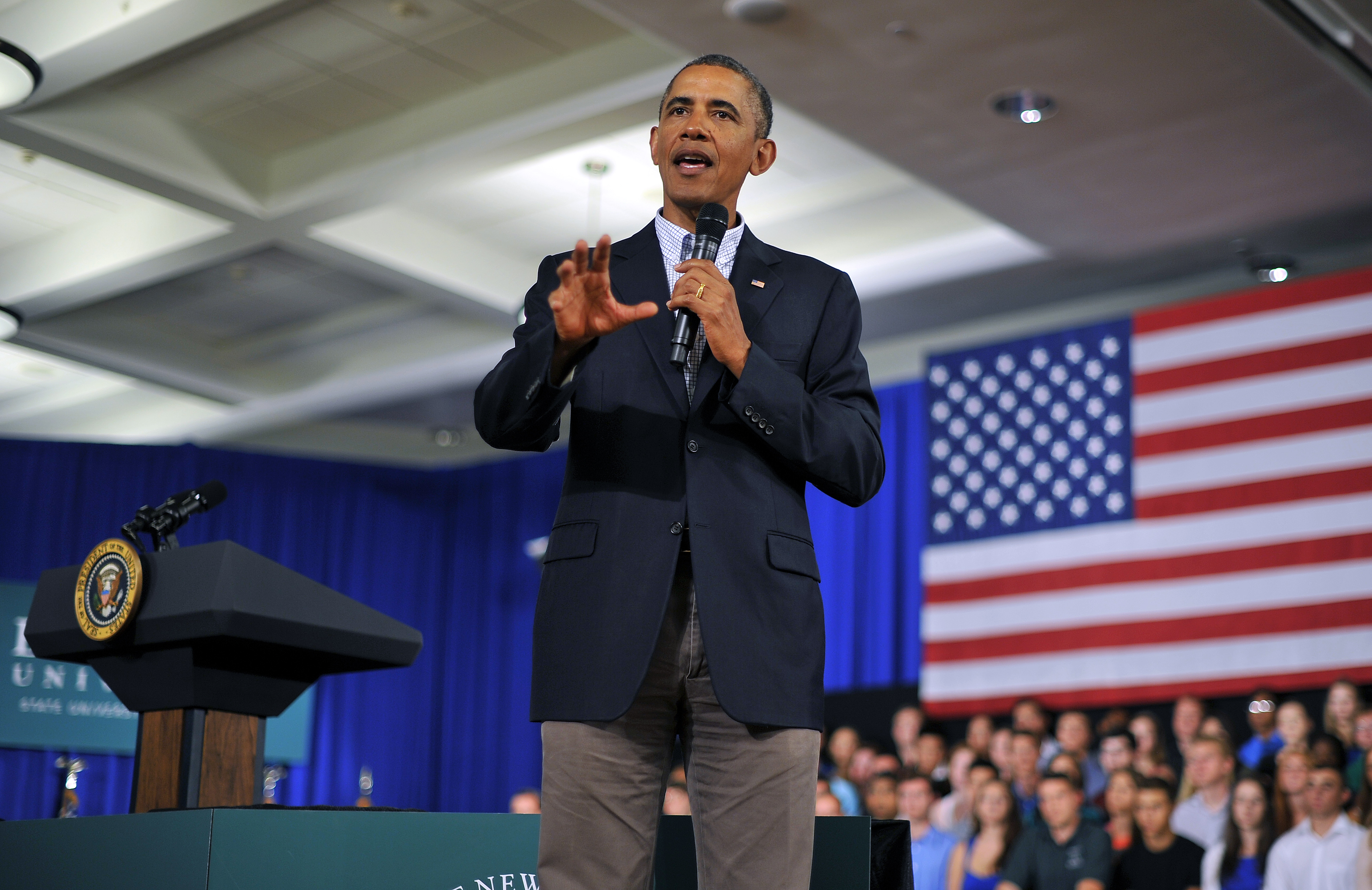 Speaking at a town hall on the second day of a two-day bus tour to push for higher education reforms, Mr. Obama said that taking steps to improve communities -- such as expanding early childhood education -- are worthwhile policies only blocked by divisive politics.

The biggest obstacle to investing in early childhood education and other strategies to improve low-income communities, he said, is "not that we don't know what policies work, it's getting our politics right."

As families of all stripes continue to struggle in the slow economy, "they get worried if we're helping people in poverty, that must be hurting me somehow," Mr. Obama said. "That government is taking something from you and giving it to somebody else, and your problems will be solved if we just ignore them, or don't help them -- that is something we have to constantly struggle against, whether we're black or white, or whatever color."

The president's remarks came in response to a question from a town hall participant about educational opportunities for minorities. Mr. Obama noted that since the August 28, 1963 march, "obviously we've made enormous strides -- I'm a testament to it, you're a testament to it, the diversity of this room and the students who are here is a testimony to it."

Still, he noted, poverty rates remain higher for African-Americans and other minority groups.

"Let's assume that we eliminated all discrimination, magically with a wand, and everybody had goodness in their heart," he said. "You'd still have a situation in which there are a lot of folks who are poor, and whose families have become dysfunctional because of a long legacy of poverty, and live in neighborhoods that are run down, and schools that are under-funded and don't have a strong property tax base. It would still be harder for young people born into those communities to succeed than those who were born elsewhere."

The president this week has largely focused on reforms to the higher-education system, but as he revived his call for investments in early childhood education, Mr. Obama on Friday noted that calls for less government spending are largely based on a false premise.

"We don't have an urgent deficit crisis... We don't have a problem in terms of spending on education," Mr. Obama said, noting that the deficit has been cut in half since 2009 and is on a downward trajectory. "The only crisis we have is the one manufactured in Washington."

Before arriving at Binghamton University, Mr. Obama stopped at Tully Central High School in Tully, N.Y. and chatted with the boys' and girls' soccer teams that were practicing outside.

One young girl present told Mr. Obama that meeting the president was on her bucket list.

"How old are you?" Mr. Obama asked. When she told him she's nine years old, the president replied, "Here's the general rule: when you're nine, you don't need a bucket list. When you get to be 52, then you might start wanting to draw one up."

After the town hall, Mr. Obama traveled to Scranton, Pennsylvania, where he delivered a speech at Lackawanna College. Once again focusing on higher education reforms, Mr. Obama promised to keep pushing for "a better bargain for the next generation."

The president was joined by Vice President Joe Biden, who was born in Scranton. Biden acknowledged that his son, Delaware Attorney General Beau Biden, was recently treated at a cancer center. "My son Beau's fine," he said. "Sends his love. He's doing well, he's anxious to get back to work."