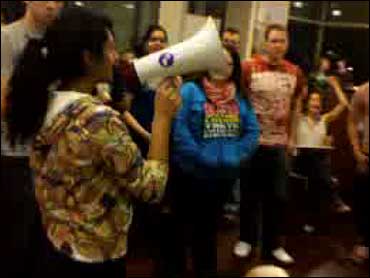 Dozens of students have barricaded themselves inside of New York University's student union cafeteria to demand increased transparency of the school's finances.

The protest began about 10 p.m. Wednesday when students from various city universities gathered inside the cafeteria of the Helen & Martin Kimmel Center for University Life.

Members of the coalition called Take Back NYU! pushed tables and chairs against the doors. A supporter said about 60 students were involved.

In a list of demands posted on a Web site, the students called for the university to release information on staff salaries and financial aid.

NYU spokesman John Beckman says the group's calls for the release of salary information is "not a reasonable request."

He said the university gives students "countless opportunities for dialogue and even protest."