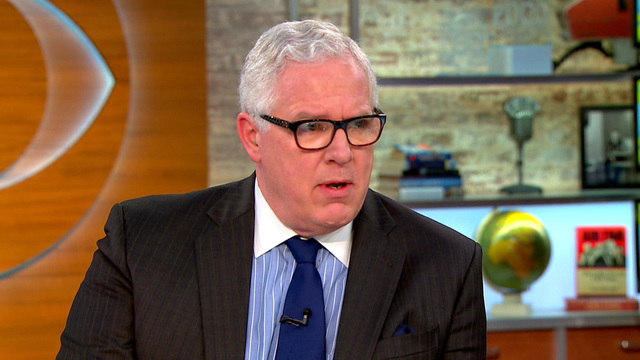 Apple's refusal to cooperate with federal investigators in the San Bernardino case has fueled a sharp debate over national security and civil liberties.

Apple has thus far declined the FBI's request and a court order to create software that would unlock the iPhone of San Bernardino shooter Syed Rizwan Farook, citing the safety of Apple customers. But NYPD Deputy Commissioner of Intelligence and Counterterrorism John Miller points out the victims of terrorist attacks are Tim Cook's "customers too."

"I have to ask, how many people who died on the floor in San Bernardino or in Paris had iPhones in their pockets as they were being killed by the terrorists?" Miller said on "CBS This Morning" Friday.

In an open letter Tuesday, CEO Tim Cook said: "Building a version of iOS that bypasses security in this way would undeniably create a backdoor," which Miller dismissed.

"They've come in with a federal warrant based on probable clause signed by U.S. magistrate. That's how we do it in democracy - they're asking for a front door," Miller said.

Calling the phone a "giant, massive storage device," Miller pointed to the possibility that this could unseal crucial evidence in the ongoing investigation. While investigators have been able to retrieve some information from Farook's iCloud, they said he stopped backing up his phone about six weeks prior to the Dec. 2 terrorist attack.

But Cook claims that "once created, the technique could be used over and over again, on any number of devices." Since his open letter, other major tech companies -- including Facebook, Google and Twitter --have also come forward to support Apple's stance against the government.

During an interview with Wall Street Journal associate editor John Bussey, Gen. Michael Hayden, former director of the CIA and NSA, said that while he understands both sides of the unbreakable encryption debate, he believes the FBI is wrong.

Still, Miller stressed that this was a one-time request.

"If you figure out the formula and crack open this phone to the point that we can try codes against it, you can tear that formula up, toss it in the fireplace and throw it away," Miller said. "So unless he thinks one of his trusted engineers is going to run out and tell the hacking world about this secret, I think that's a false flag."

According to Miller, the NYPD has also run into tensions with the tech powerhouse in the past, when the company initially declined to creating a kill switch on stolen iPhones that would erase all the data.

"They said it couldn't be done until it became bad PR and then they figure it out in five minutes," Miller said. "Apple is capable of what Apple is capable of. They'll decide to do it when they think is right."