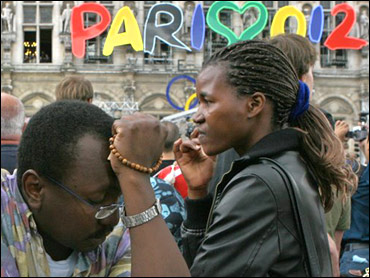 Deflated, dismayed and downright depressed, people in the four cities who lost out to London on Wednesday in the battle to host the 2012 Summer Olympics found themselves coping with the agony of defeat.

In Moscow, the first of the four also-rans to be eliminated, some people hooted in dismay, but most stood in clear disappointment as news of the loss came.

"We have an Olympic tradition here; we should have won," said Elena Ankudinova, a masseuse in the Russian capital, which hosted the 1980 Summer Games.

"We are not disappointed," he said. "We will bid for the right to become the host city for the 2016 Olympic Games."

In Madrid, hundreds of people waving Madrid 2012 and Spanish flags had packed the 18th century Plaza Mayor to follow the IOC voting. The city's elimination was greeted with a collective silence — quickly followed by boos, whistles and insults.

"It's terrible," said an angry Maria Luz Beltran, a 50-year-old unemployed woman. "This was already thought out and voted on beforehand. I am angry. Madrid had a chance of winning, but it's all politics."

In Paris, which was heavily favored to win the games, raindrops began falling just before the International Olympic Committee's announcement in Singapore. It was a bad omen for the several thousand spectators who had gathered at City Hall for what they expected would be a victory celebration.

"We can be proud of ourselves, proud of our engagement," said French Sports Minister Jean-Francois Lamour, a two-time Olympics fencing gold medalist. "Now we have to bounce back, do more work, continue to develop our strategy in spite of this big disappointment."

But few Parisians were in a bounce-back mood.

Many across France, which hasn't hosted a Summer Olympics since 1924, had hoped winning the games would help lift the country stung by high unemployment and a lackluster economy.

Losing to London was even worse. The French and the British have a long rivalry, and some accused the IOC of an Anglo-Saxon bias. As a top City Hall official extended congratulations to Londoners, the crowd responded with a chorus of boos.

"It's been three times now that Paris has been refused — 1992, 2008 and 2012. I find that bizarre," said NBA star Tony Parker, a Frenchman who plays for the San Antonio Spurs. "We did everything we had to do. I don't know what more we could have done.

"It proves that the committee is Anglo-Saxon. They prefer the English," he said.

City Hall employees folded up crisp white tablecloths that had been laid with bottles of champagne.

"In the place of champagne, tears are flowing," said Alain Sanchez, a maitre d'hotel. "Our hearts are aching a bit."

French President Jacques Chirac, who had traveled to Singapore for the city's final presentation, learned of the defeat aboard the plane carrying him to the G-8 summit in Scotland. Chirac congratulated London and wished "good luck and full success to the authorities and British people," his office said.

Wishing "good luck" to London, Prime Minister Dominique de Villepin promised to go ahead with the construction of Olympic venues, from a pool to a cycling stadium.

Not everyone in a crowd of thousands in front of City Hall was as magnanimous. Silence fell over the gathering as big screens announced the choice of London after hours of suspense — and years of waiting. Boos rang out when Deputy Mayor Anne Hidalgo wished London luck.

"It's simply an injustice today on the part of the OIC members not to choose Paris," said Francis Luyne, of the French Swimming Federation. "It's an affront to France."

The mood was subdued on a gray morning in New York, which had hoped winning the games would give it something bright to focus on after the Sept. 11, 2001, terrorist attacks.

"Everybody seems disappointed," said Nick Patrickas, a painter from Long Island who came to Manhattan early Wednesday hopeful of a New York victory.

A planned Rockefeller Center victory party instead turned into an outdoor wake. A giant Jumbotron, used earlier to beam in a feed of the vote, carried a message of defeat: "Thank you New Yorkers for your support."

Patrick Keane, 57, of Queens, felt the city offered things that its competitors did not.

"It's a very international city, so every country could feel welcome and supported," he said. "It could have been a focus for development of certain parts of the city ... and there's just the whole ripple effect of having the Olympics."

In Paris, a carnival atmosphere earlier in the day deflated in the space of a few seconds. Mayor Bertrand Delanoe called the defeat an "ordeal" that the city needed to recover from.

"I'll put all my energy into our recovery, so that we know how to make something big and positive out of this ordeal, because we have to recognize it as an ordeal," he said from Singapore on France-2 television.

Jean-Marie Leblanc, the chief organizer of the Tour de France, urged his countrymen "to sportingly accept this result and wish good luck to the chosen city of London."

Paris bid leader Philippe Baudillon drew comfort from one thought: His team, he said, couldn't have tried harder to win the games.

"We gave all we could," he said. "The Olympic movement doesn't want to come to Paris. It wants to go to London. We can only respect this choice."