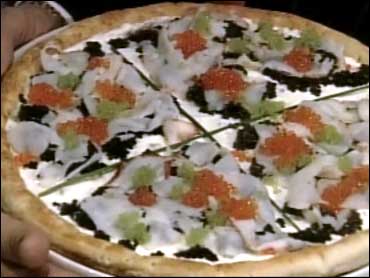 We've been dealing with the pocket-emptying effects of rising gas prices, new electric rates, and an increase in cab fare, but how would you feel about breaking the bank all for ... a pizza? Now you can find out thanks to Manhattan restauranteur Nino Selimaj, who has apparently brought from the heavens a real "pie in the sky" with his new $1,000 pizza.

The pizza will be added to the menu at "Nino's Bellisima," one of Selimaj's six restaurants in the city, reports CBS station WCBS-TV in New York. Forget traditional cheese and pizza sauce, the record-priced pie will be topped with creme fraiche, chives, eight ounces of four different kinds of Petrossian caviar, four ounces of thinly sliced Maine lobster tail, salmon roe, and a little bit of spice with wasabi.

And unlike your typical pizza, this one won't be cooked, after all, that would spoil the fish. The 12-inch pie is sliced into four pieces, which comes to $250 per slice.

"Let them say I'm crazy," Selimaj says. "But I believe in this product, and it's gonna sell!"

So who's gonna buy this pie? Selimaj is betting Wall Street business types.

"My luxury pizza will become as famous as a night at the Waldorf Astoria. When Mr. Chow's introduced upscale Asian Cuisine several years ago, people couldn't imagine paying hundreds of dollars for Chinese food. Now upscale Asian cuisine is as common as New York hotdogs. Upscale Pizza will be next," Selimaj said.

The previous international record for pizza found on a menu was $193 at Gordon Ramsey's Maze restaurant in London.