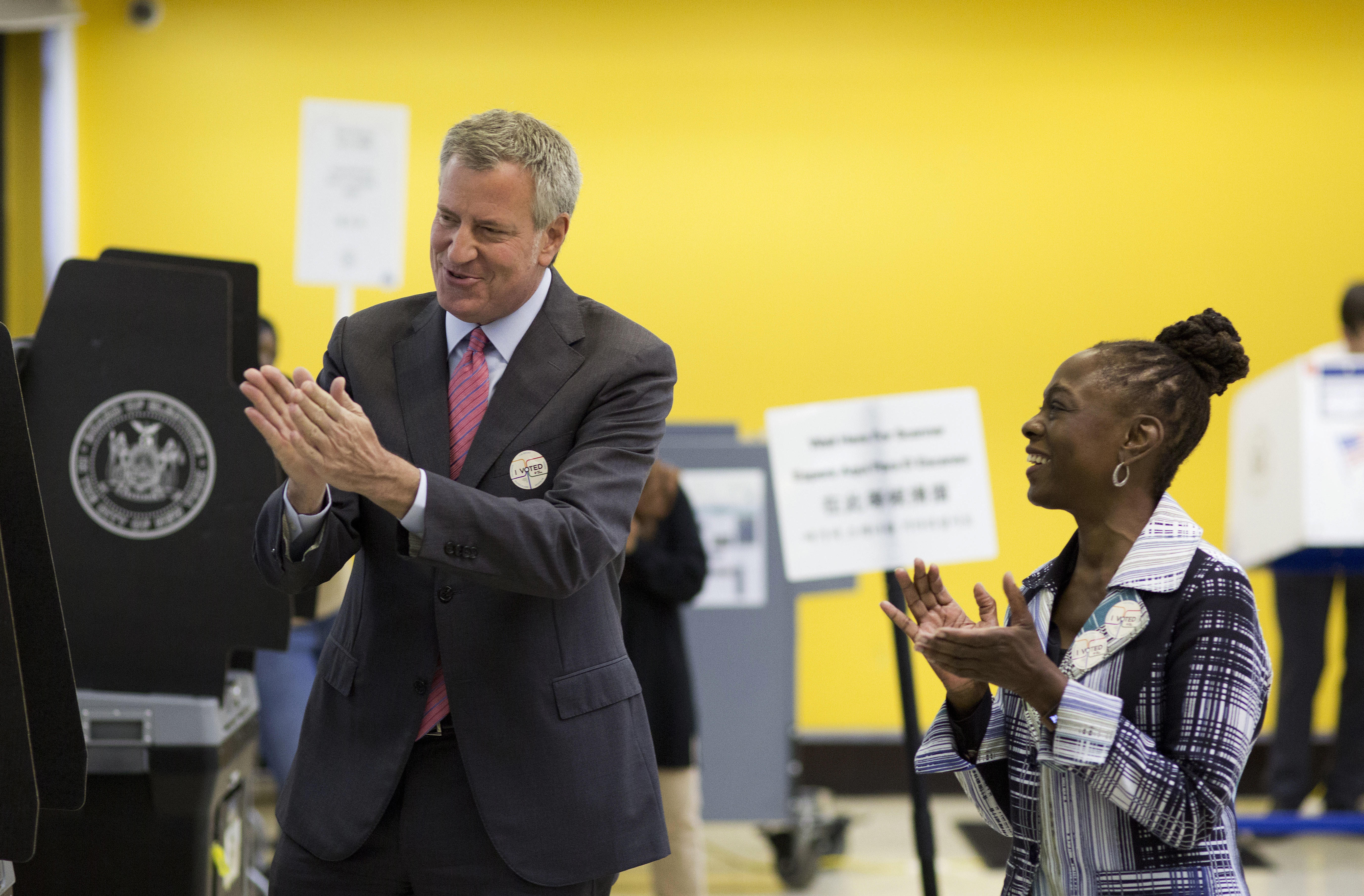 De Blasio was one of five Democrats running in Tuesday's primary. He was up against former City Councilman Sal Albanese — who appeared with him in two debates — as well as Richard Bashner, Robert Gangi and Michael Tolkin.

With 64 percent of the precincts reporting, de Blasio had 162,719 votes or 73 percent, compared with 16 percent for Albanese, 5 percent for Tolkin, 3 percent for Gangi, and 2 percent for Bashner.

De Blasio has significant advantages in the general election. Democrats outnumber Republicans by more than six to one among New York City voters who designated a party affiliation and he has already raised several million dollars. According to the latest campaign finance board figures, de Blasio has over $5 million cash on hand, while Malliotakis has $220,000 and Dietl had $269,000.

Not everyone who crossed de Blasio's path was sympathetic earlier Tuesday. A chorus of protesters greeted de Blasio and First Lady Chirlane McCray as they arrived to cast their ballots at a library in Park Slope Tuesday morning.

"Mayor de Blasio is the mayor that made the promise and committed to close Rikers Island," protester Alfredo Carrasquillo told CBS New York. "We're out here just making sure we hold him to his word."

But there were voters who came out to support the mayor.

"I think he cares about all of us not any one borough or any one socioeconomic slice and I think that's important," one Brooklyn voter said.

The mayor, seemingly unfazed, emerged from the library after voting. De Blasio said he has a lot of goals for another four years in office and hopes that despite projections of a low turnout that New Yorkers come out in large numbers to support him.

"I think that the election last year is going to start to change behavior in favor of turnout and participation," de Blasio told reporters. "I think there's a lot of interest especially after 2016 in being involved and getting the message out."

The mayor pointed voters to his record and his signature initiative, universal pre-K.

"The things we have done the last four years in an effort to bring more fairness and equality to New York City, stop-and-frisk down 93-percent, crime down as well," he said.

Albanese, a lawyer and former city councilman, cast his ballot on Staten Island. He said he's confident despite being overwhelmingly outspent and out-marketed by de Blasio's team in advertising in the lead up to Tuesday.

"I'm not that concerned about it because people already know what Bill de Blasio has done as mayor, so none of the advertising is going to change that," he said.

Some in de Blasio's home base in Brooklyn still openly supported him.

"He's learning to be mayor of the City of New York," said Park Slope resident Evan Bauer. "Not all the initiatives have succeeded but I think he's doing the right thing."

But other registered Democrats, like Matt Coogan, thought the mayor was a shoo-in and wishes there were more options on the ballot.

On the Republican side, Malliotakis, of Staten Island, is running unopposed. Among her attacks on the mayor was bashing his refusal to support public disclosure of donors who seek favors from City Hall.

"It sends a sign that New York City is for sale," she said.

New York City also was holding primaries Tuesday for other local offices. One City Council race in Queens is attracting attention because of the candidacy of Hiram Monserrate, a former councilman and state lawmaker who was expelled from the state Senate after he was convicted of assaulting his girlfriend. Monserrate later served nearly two years in prison after pleading guilty to fraud and corruption charges in a separate case. He faces state Assemblyman Francisco Moya in the Democratic primary.

Several other notable primary races were also being decided across the state.

The winners move on to the November general election.

And on Long Island, Nassau County Democrats were deciding the county executive primary matchup between Laura Curran and George Maragos. Republican Jack Martins, a former state senator, will be on the November ballot. Incumbent Ed Mangano, a Republican under federal indictment in a case in which he's alleged to have taken bribes, is not seeking another term. Mangano has pleaded not guilty.

Most party primaries in New York state are closed contests, meaning a voter must be a registered member of the party in order to cast a ballot.