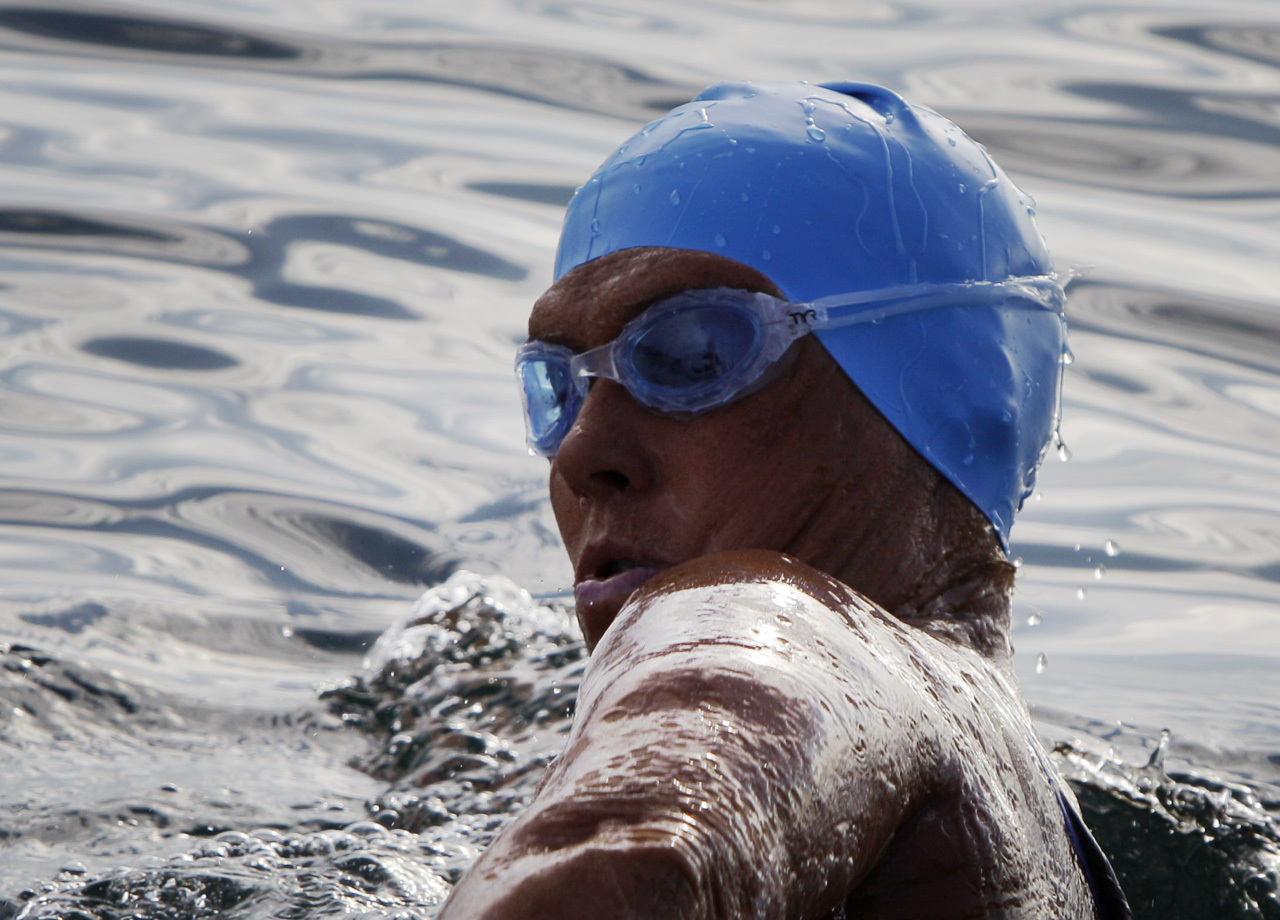 HAVANA - Endurance swimmer Diana Nyad pressed on Saturday despite painful stings from a Portuguese Man o' War and a visit from a curious shark, completing about a third of her journey from Cuba to Florida.

More than 24 hours after setting off from a Havana marina, Nyad was over 35 miles (56 kilometers) from the Cuban coast and stroking through favorably calm waters, her team said. She is hoping to complete 103 miles (166 kms) to Florida, besting her own record for an open-water swim without a shark cage by about a half-mile (1 km).

Nyad's assistants, who are updating fans and well-wishers around the world via social media, downplayed the afternoon encounter with the finned predator.

"Around 1pm — and don't everybody get excited here — an Oceanic white tipped shark was spotted near Diana in the midst of the three boat flotilla. ... Rob MacDonald, one of (her safety) divers, swam towards the shark, where they faced off within 10 feet of one another," read a post on Nyad's website.

"I guess he thought I was more aggressive than him, and he turned in the other direction," MacDonald was quoted as saying.

Without a cage to protect her, Nyad is relying on equipment surrounding her with an electrical field that is harmless but deters most sharks. Her divers are there to gently discourage any who make it through.

Nyad's nighttime run-in with the Portuguese Man o' War left her with stings on her face, arms and side.

"'It was scary' said (chief handler and close friend Bonnie) Stoll," according to Nyad's Twitter feed. "But Diana is happy that this happened early while she is still at her strongest."

Later, complaining of difficulty breathing, she received oxygen and a steroid shot from her doctors and tread water while she recovered.

When she resumed swimming her handlers noted that her stroke count had dropped to 48 per minute, down from 52-55, but as the day went on she picked up the pace.

"This afternoon — it is stunning to actually witness — Diana is swimming stronger and stronger," her website read. "Her strokes are up to 50 per minute, she is eating pasta, gobbling bananas, bits of peanut butter sandwiches, along with high-carb & high calorie liquid concoctions."

The Los Angeles woman pauses every so often to rest and refuel on food that her assistants pass to her in the water, but without getting on the boat.

Nyad says her strategy for enduring the roughly 60 hours it should take her to swim from Cuba to Florida, testing the limits of human exhaustion at the age of 62, is to focus on one partial goal after another.

"The mental approach has to be to parcel it out. No one could swim the whole thing while thinking about the whole thing," she said on her website. "Till I get a glimpse of the final shore I can't start obsessing on it — it's too far away, too nebulous — I don't know where it is. So I'm going to take it night by day: first get through the nighttime and then get through the daytime, and then the nighttime again, and so on."

She told reporters Friday in Havana that she likes to sing songs inside her head to pass the hours. Among her favorites: The Beatles, Janis Joplin and Bob Dylan.

Nyad is making her second attempt in as many months at the Cuba-Florida crossing, a lifelong dream that she first tried as a 28-year-old back in 1978, when she swam inside a steel shark cage for about 42 hours before ending the attempt.

A cageless attempt this August fell short 29 hours in when, gasping for breath, Nyad threw in the towel after an 11-hour asthma attack she blamed on a bad reaction to a new medicine.

But she said the experience did not convince her that she was physically not up to the challenge, and Nyad, who insisted the problems had nothing to do with her age, came to think of the aborted swim not as a failure but an unplanned dress rehearsal.

Though she had vowed there would be no second attempt, this week she flew to Cuba to take advantage of what she called a "magical window" of good weather and sea conditions.

Nyad, who expects to lose about 15 pounds (6.8 kilograms) on the crossing, hopes to make landfall in Florida around Monday morning.