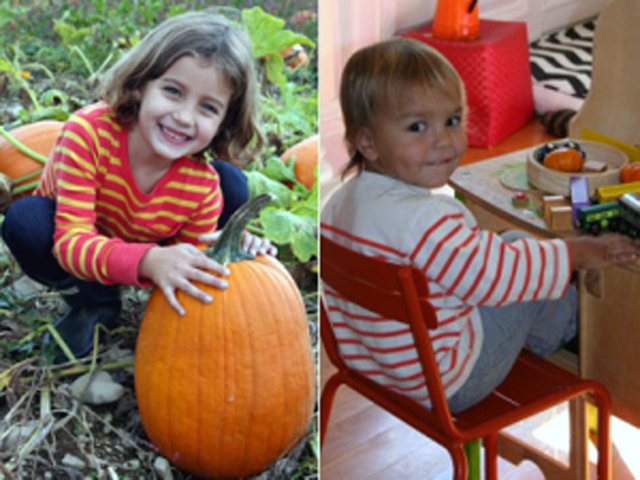 NEW YORK The nightmarish case of a nanny accused of stabbing to death two children in her care stunned the family's well-to-do neighborhood and caused legions of parents to wonder how well they know who is watching their kids.

The nanny, Yoselyn Ortega, lay in critical condition Friday with what police said were self-inflicted knife wounds, and investigators were unable to question her, in part because she was still breathing with the help of a tube.

Her motive and mental state remained a mystery, authorities said, and no charges were filed.

On Thursday evening, the children's mother, Marina Krim, took her 3-year-old daughter home from a swim lesson to find her other youngsters, ages 2 and 6, dying of knife wounds in the bathtub of their Upper West Side apartment near Central Park. Ortega then turned the blade on herself, police said.

"It's unbelievable, unbelievable, I can't imagine what the mother is feeling," neighbor Charles Zimmerman said, as reported on "CBS This Morning" Friday.

"All I can say is God be with that mother, you know, give her peace," said Maria Hirschhorn, a neighborhood resident, as reported by "CBS This Morning."

Police Commissioner Raymond Kelly said the investigation has yet to reveal anything amiss in the household before the slayings.

Police were looking into whether Ortega, a 50-year-old naturalized U.S. citizen who had worked for the family for two years, had recently sought psychiatric help. Detectives were searching her home in Washington Heights, a working-class neighborhood north of where she worked and near Harlem.

If there was tension between the nanny and the Krims, it didn't show on a Web journal kept by the children's mother. Marina Krim spoke lovingly in one entry about traveling to the Dominican Republic last February to stay for several days at the home of Ortega's sister.

"We met Josie's amazing familia!!! And the Dominican Republic is a wonderful country!!" she wrote.

Pictures posted on the blog showed the two families posing together for a happy photo, with Ortega hugging the 3-year-old, Nessie, their cheeks pressed together.

Marina Krim, whose husband, Kevin Krim, is a CNBC digital media executive, wrote that Ortega's family had nicknamed little Nessie "Rapida y Furiosa," (or Fast and Furious), for her exuberance and energy.

There are tens of thousands of nannies working in New York City, but reports of serious violence by caregivers against children are exceedingly rare. Parents are accused of killing their own children with far more frequency.

More common are stories about nannies like Brunilda Tirado, who threw her body over a stroller to protect a baby from falling debris during a building collapse in the same Manhattan neighborhood in 2005. She suffered a broken arm and other injuries.

The slayings will undoubtedly prompt many parents hiring a nanny to check references more thoroughly and swallow hard over the possibility that they might unknowingly hire a person who would do their child harm.

"For working parents this is a nightmare. Every mother I know is asking today, `How do I go back to work?"' said Denise Albert, who has two young children and lives a few blocks from the site of the tragedy.

She stopped by the building to pay her respects, recalling a painful time she had to fire a nanny after 3 1/2 years when she found out the woman was lying about where she was taking the kids.

"It's the most difficult relationship in the world," she said.

Albert said the two college students now caring for her children after school feel like members of the family.

Some parents said their trust in their nannies is unshaken.

"It's a horrible tragedy, but it doesn't make me question my nanny at all," said Elizabeth McCarthy, a single mother of a 6-year-old boy. "For me, I found somebody I trust. She's an incredible part of my son's life. She's a wonderful person, she's raised children of her own and this doesn't make me in the least bit question anything about her."

Across the street from the building where the Krims live, several nannies with children in strollers stood as if stricken, watching police officers milling around the entrance.

Michelle Person, a nanny from Jamaica, broke down thinking about the children who were killed.

"You just feel like it was the kid that you were taking care of, too. It's horrible," she said, her eyes filling with tears.

She said she loves the 11-month-old boy she cares for as if he were her own son.

Another nanny, Karen Henry, said she felt uncomfortable walking around the neighborhood after the deaths.

"Parents are looking at you as though you're responsible for what happened," she said.

Multitudes of parents think of their nannies as Mary Poppins-like heroes and trust them completely, but the relationship can be a complicated one. There is maybe no other profession in which the line between family and workplace, employer and employee, is so thin.

New York state two years ago passed a law to protect nannies from financial exploitation. The nannies commonly work 10- to 12-hour days, for an hourly wage similar to that of a full-time employee at Walmart, usually without fringe benefits.

Sharon Weatley, a writer and actress who is a former nanny and now relies on baby sitters to take care of her daughters, ages 4 and 14, said that if Ortega did indeed kill the children, "she is obviously crazy and this is a chemical imbalance going on in a horrifically tragic situation."

"But I do think child care providers sometimes walk around with a lot of anger toward their employer," she added. "People ask them to do ridiculous things beyond the care of children. Then they get overworked and frustrated in the same way that a parent gets overworked."

Thursday's slayings evoked the case of Louise Woodward, a British teenager who was convicted of killing a baby in her care in Newton, Mass., in 1997. That case prompted discussion at the time about whether teenage au pairs could handle the stress of caring for a stranger's child. Woodward served less than a year in jail.

Ortega's case is different. She is older and had experience. Police said she went to the Krims on a referral from another family.

Cheryl Meyer, a psychology professor at Wright State University in Dayton, Ohio, and co-author of the book "Mothers Who Kill Their Children," said that while many women who kill their kids feel trapped, in most cases a nanny who thinks she is at breaking point with a difficult child can walk out.

She said it's not uncommon to hear of a family in which the nanny or baby sitter quits, leaving a note or just never coming back.