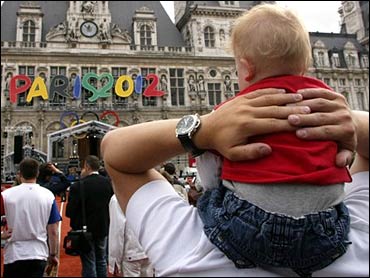 New York, Moscow and Madrid were eliminated in the voting for the 2012 Olympics on Wednesday, setting up a showdown between European rivals London and Paris.

Moscow dropped out after receiving the fewest votes in the secret ballot of the International Olympic Committee. New York followed within a few minutes and then Madrid a short time later.

Though IOC voters went on to pick the host city, the winner was not immediately announced.

Just hours before the final vote began, the five cities bidding for the games made their final pitches with messages of support from presidents, prime ministers, royals and sports celebrities.

All gave 45-minute presentations to the International Olympic Committee, which later voted to determine the winner of the most glamorous and hotly contested bid race in Olympic history.

Paris went in as the perceived favorite and London a strong challenger. New York and Madrid would be surprise winners, while Moscow was a long shot.

Paris, led by President Jacques Chirac, said it had learned from past defeats and come up with the right formula to bring the games back to the French capital for the first time since 1924.

"The heart of Paris and the heart of France are beating in unison in the hope of becoming Olympic host in 2012," Chirac told the delegates. "You can put your trust and faith in France, you can trust the French, you can trust us."

Paris is bidding for the third time in 20 years after defeats for the 1992 and 2008 Olympics — and the IOC tends to reward persistence. The French capital has a ready-to-go Olympic stadium in the Stade de France and embraces the IOC's blueprint for controlling the size and cost of the games.

"Each experience has taught us something and each disappointment has only served to reinforce our determination," he said.

The Paris presentation featured a slick video directed by film director Luc Besson. It began with a bird's eye view of the city, with the camera floating over famous landmarks.

London, which last held the games in 1948, centers its bid on the massive urban renewal of a dilapidated area of East London. It's the fourth bid from Britain after failed attempts by Birmingham for the 1992 Olympics and Manchester for 1996 and 2000.

"We have learned from each of the three previous bids," British IOC member Craig Reedie said in the presentation. "We understand the recipe for magical games."

Prime Minister Tony Blair, who spent two days of lobbying in Singapore before leaving to host the G8 summit in Scotland, spoke in a video message — half of which was delivered in French, one of the IOC's two official languages.

"My promise to you is we will be your very best partners," Blair said. "The entire government are united behind this bid. ... It is the nation's bid."

Upset hopeful New York made an emotional case for taking the games to the Big Apple for the first time, with a star studded delegation — including Sen. Hillary Rodham Clinton and Muhammad Ali and a taped message from President George W. Bush — citing the city's long tradition of welcoming the world.

Mayor Michael Bloomberg stressed the city's resilience in recovering from the Sept. 11, 2001, attacks, which occurred shortly before his election.

"In our city's darkest hour, we asked ourselves, can we recover?" he said. "New Yorkers stood up then and said, 'Yes, we can recover, we will rebuild and we must continue to welcome everyone. That spirit will be given to your Games."

President Bush, who unlike rival government leaders did not travel to Singapore, offered support for New York in a taped video message.

"Our commitment is total, whether it is security or visas," Bush said.

Former President Bill Clinton also appeared on video, while his wife was one of the featured live speakers at the presentation.

Russian President Vladimir Putin, speaking in English publicly for the first time, appeared in a video message appealing to the IOC to make a "unique and historic" decision by giving the games to Moscow.

"I am convinced that our hopes for success in bidding for Olympics 2012 are absolutely justified, reasonable and realistic," he said.

Moscow's bid, however, has been undermined by security worries after terrorist attacks connected to the conflict in the Russian province of Chechnya. Chechen rebel warlord Shamil Basayev warned on Tuesday in a statement posted on a separatist Web site that athletes would not be safe if Moscow hosted the 2012 Olympics.

"The whole Spanish royal family is convinced that Madrid fully meets the conditions to offer to the world the best Olympic Games," the queen said.

"Absolute security is assured," Zapatero said. "It's our main priority. Those who have tried to attack our candidacy will see that this is something that is doomed to disappear in Madrid and all of Spain."