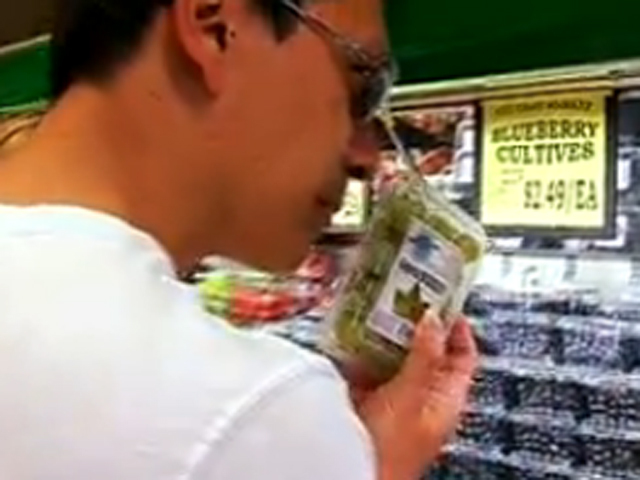 A supermarket chain thinks the fastest way to its customers' pockets is through their noses, so it's filling up the aisles with intoxicating, artificial food aromas to entice customers to buy.

A Net Cost supermarket in Brooklyn, N.Y., has specialized scent machines mounted on its walls that fill the air with a never-ending scent of decadent milk chocolate or fresh-baked bread, among other scents.

The Brooklyn supermarket has five of the machines, including a grapefruit smell in the produce section, chocolate in the candy aisle and rosemary focaccia by the bakery.

"Early Show" Contributor Taryn Winter Brill reported ScentAir, the company responsible for these machines, offers 350 kinds of smells to choose from. The machines are part of a marketing campaign that targets a shopper's sense of smell. But if you'd like to create your own original scent, it will cost you $5,000.

The store's merchandise coordinator, Angelina Khristichenko, says she installed the machines two months ago after hearing about them overseas.

"I think because of these machines it makes customers hungrier," she said.

Brill explained the goal is simple - make customers hungry, and in turn, they'll open up their wallets.

Sales in the grocery's produce department, Brill reported, have gone up at least seven percent. So with each machine costing $99 a month, this market says it's made a good investment.

Khristichenko told CBS News, "So far so good, everyone's enjoying it, everyone loves it."

In the U.S., consumers spend an estimated $500 billion a year on food. With smell accounting for 75 percent of what we taste, Brill remarked there's no denying a psychological effect.

Melvin Oatis, clinical supervisor of the New York University Child Study Center, said, "The sense of smell is so primal, it goes into an odor part of the brain before it can all register and it's an unconscious wonderful thing that happens to you. So that sense of smell actually translates later into, 'Oh, I wasn't even hungry, but now I want popcorn.'"

But it isn't the smell of fresh popcorn that's overwhelming shoppers in this Brooklyn store - it's smoked meat, among other scents.

When one woman learned that the smell of smoked meat wasn't real in the meat department, she wasn't bothered by the artificial scent because she said she liked the smell.

On "The Early Show," Brill added the Brooklyn supermarket says they also hand out free food samples so customers can actually taste products. With the scent machines, the market says it's a winning combination.