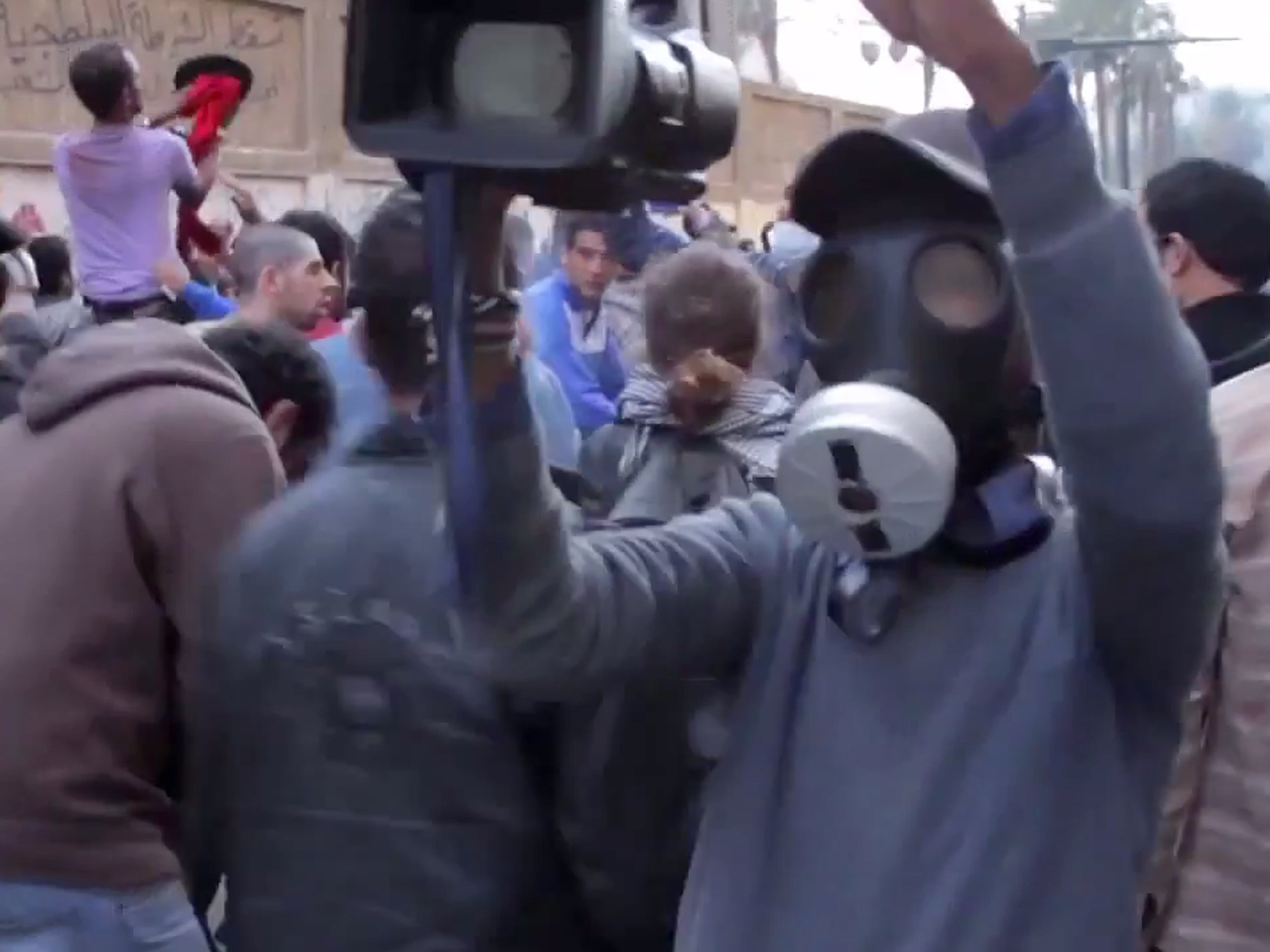 Two new documentaries explore, in their narrative and their construction, the power of images to foster revolutions -- or to combat the power of the state and better understand the emotional pain inflicted by political strife.

In “The Square” by director Jehane Noujaim (“Control Room”), the story of the revolution in Egypt that deposed a dictatorial leader -- and, eventually, his democratically-elected successor -- is told by the activists who occupied Cairo’s Tahrir Square and were met with violence, victory, and political birth pangs associated with the country’s new constitution.

In January 2011, inspired by the uprising that toppled Tunisia’s leader, young and old took to the streets of Egypt, determined to rid themselves of Hosni Mubarak, who had ruled for 30 years with the help of a secret police force that suppressed dissent.

While “The Square” condenses two years of public demonstrations, it also introduces us to the individuals on the ground who took action: Ahmed Hassan, a young idealist convinced that a people’s movement can conquer the regime; Magdy Ashour, a member of the Muslim Brotherhood who finds himself at odds with the organization’s leadership over its political agenda; Khalid Abdalla, an actor and activist who became a familiar talking head on Western media; and filmmaker Aida El Kashef (whose video about violence against women caused a stir in 2013).

We see in the beginning of the movement a square filled with a wide cross-section of political and religious backgrounds, all with a common agenda. But as Mubarak’s departure began to reshape the landscape, divisions enter the picture, with activists warning that a “divide and conquer” ethos by the state will ensure the movement’s defeat.

“The Square” includes footage of security forces confronting journalists and activists, forbidding them to film, or attacking their cameras. In November 2011 Noujaim was arrested by Egyptian police while documenting clashes in Tahrir Square; her camera -- in the hands of some, a revolutionary weapon -- was confiscated.

But with more and more smartphones available to just about anyone in Tahrir Square, hiding police abuse became impossible. Activists were told to always record everything, as evidence of crimes by security forces. Footage of such atrocities as armored vehicles driving over protesters become a tool of anti-government expression, spreading to the world via YouTube, Facebook and other media.

The images fueled and prolonged the protests, which rekindled every few months with each new incident of police abuse or political gamesmanship. As Ahmed Hassan observes, “As long as there is a camera, the revolution will continue.”

“The Square” won an Audience Award at the Sundance Film Festival last January, but since then events in Egypt have led the filmmakers to update the documentary, to include the removal from power of President Morsi and the crackdown on the Muslim Brotherhood -- and, yet again, an occupation of Tahrir Square.

During a press conference at the New York Film Festival (where the updated documentary will debut on Thursday), Noujaim was asked if her film was finished. She replied, “The revolution is ongoing.”

After its festival appearance, “The Square” will open in New York City’s Film Forum on October 25. It has not been rated.

A similar point about the power of imagery is expressed through Rithy Panh’s “The Missing Picture,” about the atrocities committed by Pol Pot’s Khmer Rouge. The tragedy that befell Cambodia in the mid-1970s is far less familiar to U.S. audiences than, say, the Nazis’ Holocaust, Rwanda, or the Balkans, in part because there are comparatively fewer images to tell the story of its victims or survivors.

Panh was 13 when the capital Phnom Penh fell to Marxist revolutionaries, who declared a war on intellectuals. The city was emptied, its populace stripped of personal possessions and forced to work in the fields for meager rations of food. Over the course of four years, famine, disease and executions killed as many as three to four million people. Panh lost his father, mother and siblings, and witnessed society crumbling around him.

After previously directing the documentaries “Site 2,” “S21: The Khmer Rouge Killing Machine,” and “Duch, Master of the Forges of Hell,” and the dramas “Rice People” and “The Burnt Theater,” Panh worked for a year and a half conducting interviews for “The Missing Picture.” He then shifted the focus of the project from a document of the Khmer Rouge’s excesses to a more personal tale of surviving a “rehabilitation camp.”

However, illustrating the story was challenging; his childhood home and personal effects no longer existed. Panh solved the problem of a lack of photos in a highly theatrical manner, by having clay figurines fashioned and posed in dioramas to represent a life that existed only in memory. Filmed in extreme closeup, the silent figures ache to tell the story Panh’s poetic narration conjures.

The conceit at first seems too artificial and contrived -- static, and as reductive as watching a child play with toys. But over the course of the film we accept what is in essence a child’s tale, the silent figures shouting out a young person’s plea for understanding. Why would such inhumanity exist? Why, for example, would a little boy expose his starving mother for stealing a mango, a crime punishable by death? Why would people acquiesce to such inhumane treatment?

While mankind may not be closer to answering such questions, “The Missing Picture” helps fill in a gap of our awareness, and of preserving the questions raised by one young soul who thankfully escaped with his life.

Though clay figures take up much of the screen time, there are fleeting film images from the period. Panh, who helped found a film archive in Phnom Penh, the Bophana Center, collected newsreels and propaganda films created by the Pol Pot regime. What survives to this day of the Khmer Rouge films aimed at promoting the regime’s anti-colonial message and its utopia of agrarian reform, merely exposes the inhumanity of Pol Pot and his followers in the most mundane and kitschy propaganda.

They have a curio appeal, but also a morbid story all their own; at least one cameraman was executed for having captured on film, wittingly or not, the malnourishment of young children.

To watch an excerpt from “The Missing Picture” (alas, in French without English subtitles), click on the video player below.

“The Missing Picture,” which won the Certain Regard Prize at last May’s Cannes Film Festival, will be distributed by Strand Releasing in early 2014. The film has not been rated.

Ralphie May's cause of death revealed