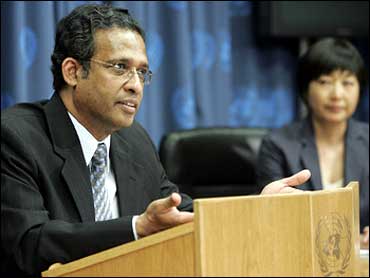 The chair of an upcoming U.N. conference on the illegal trade of small arms has received more than 100,000 letters of complaint from Americans who believe it could impinge on their constitutional right to bear arms, he said Wednesday.

Many of the letters contained a form message available on the National Rifle Association Web site that complains the June 26-July 7 conference will take place on the July 4 Independence Day holiday, U.N. officials said. The message argues that the conference is meant to limit Americans' right to carry weapons.

"And the American people will never let you take away the rights that our 4th of July holiday represents," says the form letter addressed to Prasad Kariyawasam, the conference chair and U.N. ambassador from Sri Lanka. "Our freedoms are not to blame for the world's problems, and this is a battle you can never win."

In a news conference on Wednesday, Kariyawasam said he had received more than 100,000 of the letters. He noted that the conference would not meet on July 4 because the U.N. headquarters is closed for the holiday.

The conference is reviewing progress on implementing a program of action agreed to by all U.N. member states, including the United States, in 2001 that seeks to clamp down on the illegal trade of small arms such as pistols, assault rifles and machine guns.

It stems from findings that conflicts worldwide are often made more deadly and intractable by the availability of illicit small arms.

Kariyawasam said the conference will only focus on efforts to ban the illegal sale of weapons, and would have no impact on private ownership.

"Contrary to what people say, especially in this country, this conference and program of action is not aiming to ban individual use of firearms if they are held legally," he said. "The U.N. program of action covers only illegal trade, illegal trafficking and illegal brokering."

Wayne LaPierre, the executive vice president of the NRA, said in a message on the NRA Web site that the conference seeks to draft a treaty that would "pass a global treaty banning ownership of firearms."

The United States, including U.S. Ambassador John Bolton, will participate in this year's conference. A fact sheet on the U.S. State Department Web site says the United States supports efforts to stem the illegal flow of small arms.

U.S. mission spokesman Richard Grenell said his office has also gotten many letters from NRA members, just as it does from other non-governmental organizations before other major U.N. conferences. The NRA Web site also includes a form letter to Bolton.

"We have received thousands and thousands of letters from concerned members," Grenell said. "We have been in discussion with the group and understand their concerns."