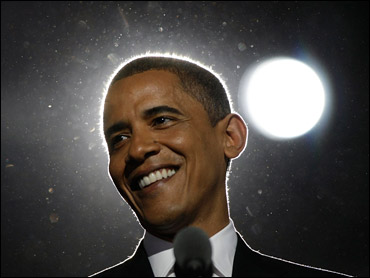 Everyone knew that Barack Obama can give a good speech, and he did just that tonight. The Obama we heard from was an attractive figure. Too bad he doesn't exist.

The speech was very well designed to achieve its many political objectives. Obama worked hard to express his identification with ordinary Americans - simultaneously countering the perceptions that he is a vapid celebrity and that he is uncomfortable with conventional patriotism. Obama was very careful on this point. There was no Clintonian (or David Brooksian) talk of himself as a globalized man, no reference to Indonesia or even Hawaii. He wisely declined the opportunity to talk a lot about race; doing so could have led him nowhere helpful. If it had not been the anniversary of the "I Have a Dream" speech, perhaps he would not have alluded to it at all.

He tied McCain to Bush and hit both hard on economics, while (naturally) neglecting to mention the rough edges of his own economic policies: the taxes on small business that his health-care plan entail, for example. He didn't even mention his tax hikes on the rich. And he presented himself as a unifying moderate on social issues.

If all you knew of Obama was what he presented to you in his speech, you would think of him as a typical Democratic politician improved by the addition of a bit more thoughtfulness and idealism than the average representative of the class. You would be amazed to learn of his extremely close relationship to a radical anti-American preacher; or that he has followed a no-enemies-to-the-left approach to politics that put him in the company of an unrepentant terrorist. You would not suspect that he favors taxpayer-funded abortion or drivers' licenses for illegal immigrants. You would not realize that he has crossed party lines far less often than McCain. You would not imagine that he had ever voted against funding for troops in war zones. It would not cross your mind that this denouncer of hardball, self-interested politics might be having his campaign intimidate reporters out of looking into his record.

Obama was less successful in making the case for himself on foreign policy, but no less dishonest. He did not acknowledge the success or even the existence of the surge. He presented McCain as the lone holdout against a consensus on withdrawal from Iraq that includes President Bush. If he had had his way, we would have been out of Iraq a long time ago and the country would be in far worse shape - but by presenting a timeline of the Iraq debate that excludes the last two years, he kept all but the most attentive listeners from noticing.

The senator argued that we should be able to disagree on political issues without questioning each other's character. True. But he concludes that we should therefore ignore the evidence that he has, in fact, adopted the foreign-policy positions he has for political reasons. He acts as though he is being gracious by not leveling a like charge against McCain. But it is no concession to declare off limits an accusation that applies to you and not your opponent.

I am not sure who the real Barack Obama is. I do not believe that I saw him Thursday night.

By Ramesh Ponnuru
Reprinted with permission from National Review Online