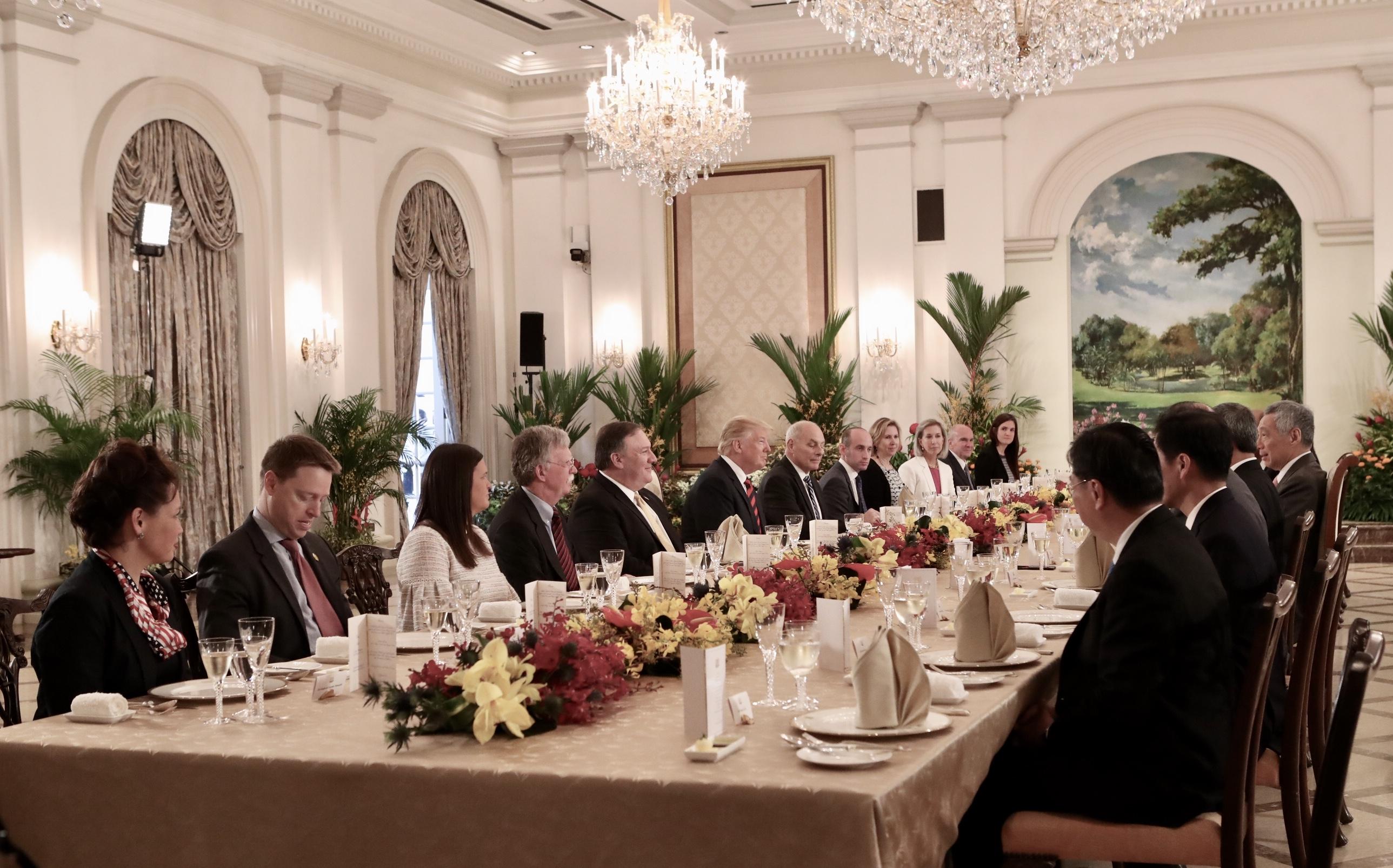 Secretary of State Mike Pompeo briefed reporters Monday morning in Singapore to give an update on preparations for President Donald Trump's historic summit with North Korean leader Kim Jong Un. Pompeo said he was "very optimistic" that the two leaders would be able to lay the "framework" of a plan to denuclearize the Korean Peninsula, but he acknowledged that much "hard work" would come after the meeting, even if it is successful.

The two leaders are to meet on Tuesday at the luxury Capella Hotel resort on Singapore's Sentosa Island. The White House confirmed that they will meet privately on Tuesday before holding an expanded bilateral meeting with their respective advisers.

Mr. Trump will become the first sitting U.S. president to meet with a North Korean leader when he sits down with Kim in Singapore. While the ultimate goal for the U.S. is complete, permanent and verifiable denuclearization of the Korean peninsula, how that might be achieved in these talks remains an open question. According to the White House, Mr. Trump is to fly back to Washington on Tuesday evening after the meetings, about 12 hours earlier than originally planned.

"The discussions between the United States and North Korea are ongoing and have moved more quickly than expected," the White House said in a statement on Monday, without elaborating. There was no indication that Mr. Trump's stay, or the top-level talks, might be extended.

The president views the meeting as the first of perhaps several meetings with Kim, and the tangible "deliverables" are difficult to forecast. The key question is, "How much precision are both leaders prepared to apply to the aspirations," as one North Korea analyst put it.

Pompeo, addressing journalists on Monday, first sought to reject a story in The New York Times suggesting the U.S. negotiating team "lacks the technical expertise" to conduct the negotiations. He said the U.S. team has "dozens" of experts and has spent months poring over the details in an effort to put Mr. Trump "in the right place" ahead of the summit.

He reiterated that the "complete and verifiable denuclearization of the Korean Peninsula is the only outcome the United States will accept."

"President Trump is going into this meeting with confidence, a positive attitude, and eagerness for real progress," said Pompeo. "He has made it clear that if Kim Jong Un denuclearizes there is a brighter future for North Korea. Tomorrow, we will get our clearest indication to date of whether Kim Jong Un truly shares this vision."

He added that President Trump, "recognizes Chairman Kim's desire for security," and his interest in economic development. Pompeo said Trump was willing to help North Korea achieve both objectives, if it "makes the right choices."

Pressed by CBS News chief White House correspondent Major Garrett on whether Mr. Trump was willing to commit to a U.S. military withdrawal from South Korea, Pompeo refused to go into detail on what the U.S. was willing to offer Kim in terms of "security assurances" in exchange for an agreement to abandon his nuclear weapons.

"There's gonna be a lot of work left to do," said Pompeo, adding that the U.S. was "not going to conduct these negotiations in the open with the media. We're going to conduct them between the two parties so that we have an opportunity to have a real success here." He said the discussions on Tuesday "will set the framework for the hard work that will follow."

The top American diplomat said he was "very optimistic we will have a successful outcome" from the summit, and going forward with the process it seeks to establish. He stressed that the U.S. would insist on a process of disarmament that was entirely verifiable -- with the North's steps being verified before reciprocal measures were taken by the U.S.

CBS News' Garrett says while Pompeo told reporters on Monday that the U.S. was prepared to offer North Korea "security assurances that are different, unique" -- suggesting concessions which hadn't been tabled by previous administrations -- the top U.S. diplomat would not elaborate.

Nor would Pompeo discuss any specific parameters for the meeting he and Mr. Trump had agreed, such as red lines that would see the U.S. leader stand up and walk out of the discussion with Kim -- something he has vowed to do if it doesn't go well.

"The president is fully prepared for the meeting tomorrow," said Pompeo.

A State Department official told CBS News that U.S. Ambassador to South Korea Sung Kim and his team started talks with their North Korean counterparts on Monday at about 10 a.m. local time. They took a brief break, during which Ambassador Kim spoke with Pompeo, but as of 5 p.m. local time the discussion was still going on, likely causing Pompeo's Monday news conference to be delayed.

As CBS News reporter Kylie Atwood notes, it was a long day of negotiations ahead of the historic leaders' summit. The State Department tweeted a photo of the diplomats around a conference table and said it had been a "substantive" day of meetings -- mirroring Pompeo's early description of the meetings as "substantive and detailed."

The U.S. diplomatic team, led by Ambassador Kim, left talks in the Demilitarized Zone with its North Korean counterparts last week without a pre-baked statement or agreed-upon path forward beyond the summit, according to administration officials.

Traditionally, in meetings between world leaders, officials from both sides reach an agreement before the leaders sit down together. This time the outcome will largely depend on the meeting itself and the chemistry between the two leaders, one administration official said.

The U.S would like to walk away with a signed agreement detailing a path forward, but diplomats and administration officials don't know whether that will happen.

Kim seeks relief from crippling economic sanctions imposed by the international community, a non-aggression pact that would guarantee his regime's security, normalization of relations and the eventual removal of the roughly 30,000 U.S. troops from South Korea. These are long-term aspirations that will not be resolved in one meeting. The U.S. has said a formal end to the Korean War needs to be negotiated between the North and South, but this topic is sure to come up.

Analysts argue that North Korea has already notched a win by holding a summit at all -- it legitimizes Kim on the world stage. Kim craves modernization and believes that can be accomplished, in part, by foreign investment and trade currently blocked by sanctions.