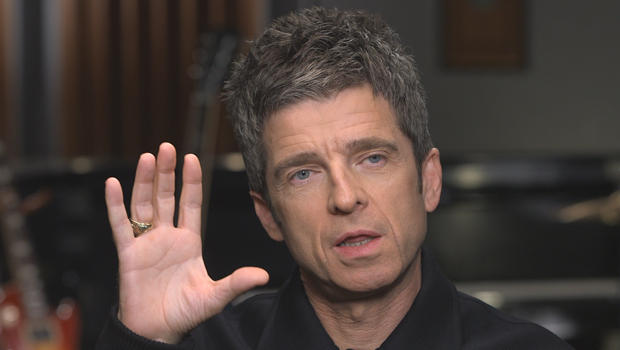 "Wonderwall" was a 1995 hit for the rock band Oasis, and for lead singer Liam Gallagher and his song-writing brother Noel. Long out of the band -- and estranged from his brother -- Noel Gallagher is talking this morning with Anthony Mason, For The Record:

Two-and-a-half years -- that's all it took for the British band Oasis. One moment Noel Gallagher was unemployed, the next he was on top of the world.

"It was insane," Gallaghed replied. "That trajectory from nothing to … the biggest band in the world! It was brief, but we were there. It was kind of breathtaking, really."

Oasis' 1994 album, "Definitely Maybe," was then the fastest-selling debut in British history.

Why did that happen? "Timing," said Gallagher. "Nirvana, the grunge thing had come to its natural end, and the scene was set for something. It happened to be us. The people don't know what they want till you give it to them."

Mason asked, "What did you give to them?"

"Songs, melodies, attitude, and a kind of irreverence."

But Noel and his younger brother, Liam, fought from the start. Liam, the lead singer, was all sneer and swagger. Noel, the songwriter, was the band's Svengali. It was a combustible collaboration.

To hear Oasis perform their 1995 song "Talk Tonight" click on the video player below.

Mason asked, "As much as you and Liam have bickered over the years, could you have been successful without each other?"

The Gallagher brothers came out of Manchester, England, the gritty city George Orwell once called "the belly and guts of the nation."

"This is where we're from, you know, and it is extremely working class," Gallagher said.

On an unseasonably lovely Manchester day ("I was kinda thinking you might get a bit of the Manchester experience, which is sideways rain"), he took Mason to the playing fields of his youth.

"These were all bowling greens. And we used to sit in there and take drugs and listen to music on little, tiny, s****y little tape recorders, and do a bit of growing up."

His musical education started at Sifter's Record Store, name-checked in Gallagher's song "Shakermaker" ("I used to be in here all the time," he said):

Gallagher picked up a guitar at 13, but said nobody quite knows why the guitar was in the house: "Because I'm not from a musical family."

The Gallaghers' mother, Peggy, worked in a school and a biscuit factory. Their father, who left when Noel was a teenager, was alcoholic and abusive. Noel has said his father effectively beat the talent into him ("A good line, that one, isn't it? Yeah").

"It gave me the drive to make something of myself. I think I definitely withdrew into myself, into my own world, as a reaction to that. And the guitar, that thing, became my world, you know what I mean? I've never written a song about it, right? Which is fascinating."

"Why do you think that is?"

"I don't know! Well, I've never been to see a therapist. Until today!"

By the early 1990s, Noel had moved into an apartment in downtown Manchester. He wrote all of Oasis' first album there: "I wrote 'Rock 'n' Roll Star' in this room on an electric guitar with the amp, with the guy underneath me bangin' on the floor with a brush handle. And you know the first line is, "I live my life in the city,' you know, 'there's no easy way out.' And that's kind of like, this is it. This is it."

To hear Oasis perform "Rock 'n' Roll Star," from their album "Definitely Maybe," click on the video player below.

When asked to describe his chemistry with Liam, Noel said, "I think that was the strength of the band, was my songs and his thing, whatever that thing is. So 99.9% of the population see him as one thing, I see him as another, because I'm his brother."

Their fights were epic. One notorious battle, recorded after Liam was arrested for being drunk, was released as the single "Wibbling Rivalry" -- and made the British charts

After seven albums that all went to No. 1 in Britain, Noel quit the band in 2009.

"And I know that annoys people, fans in particular. But it's not about them. And if anybody doubts my resolve, then I pity them. I pity them."

"Do you guys talk to each other now?" Mason asked.

"There's too much been said."

"Is it beyond repair?"

"For me, it is, yeah," Noel said. "It got personal, and he kind of brought my wife and kids into it, very publicly. And I'm kind of like, 'Okay if you want to go there, be prepared to take this s**t to the grave, okay? That sounds callous and cold. But that's who I am, I'm afraid."

He has his own band now, the High Flying Birds. They just released their third album, "Who Built the Moon?" The late Beatles producer George Martin once called Noel Gallagher the "finest songwriter of his generation." But he admits his lyrics at times are a mystery even to him:

Slowly walking down the hall
Faster than a cannonball
Where were you while we were getting high?

Mason asked, "Do you know what 'Champagne Supernova' means?"

"No idea!" said Gallagher. "You know, 'slowly walkin' down the hall, faster than a cannonball' … what?"

He recalled singing it on his last tour: "And I was thinking, what is this song about? And then I happened to glance up. And there was a guy, and he had his shirt in one hand and his fist clenched. And he was cryin' his eyes out. And I was like, that's what it means.

"I'm not sure songs have to have literal meanings. They're a part of people's lives"

To hear Noel Gallagher's High Flying Birds perform "It's a Beautiful World" click on the video player below.