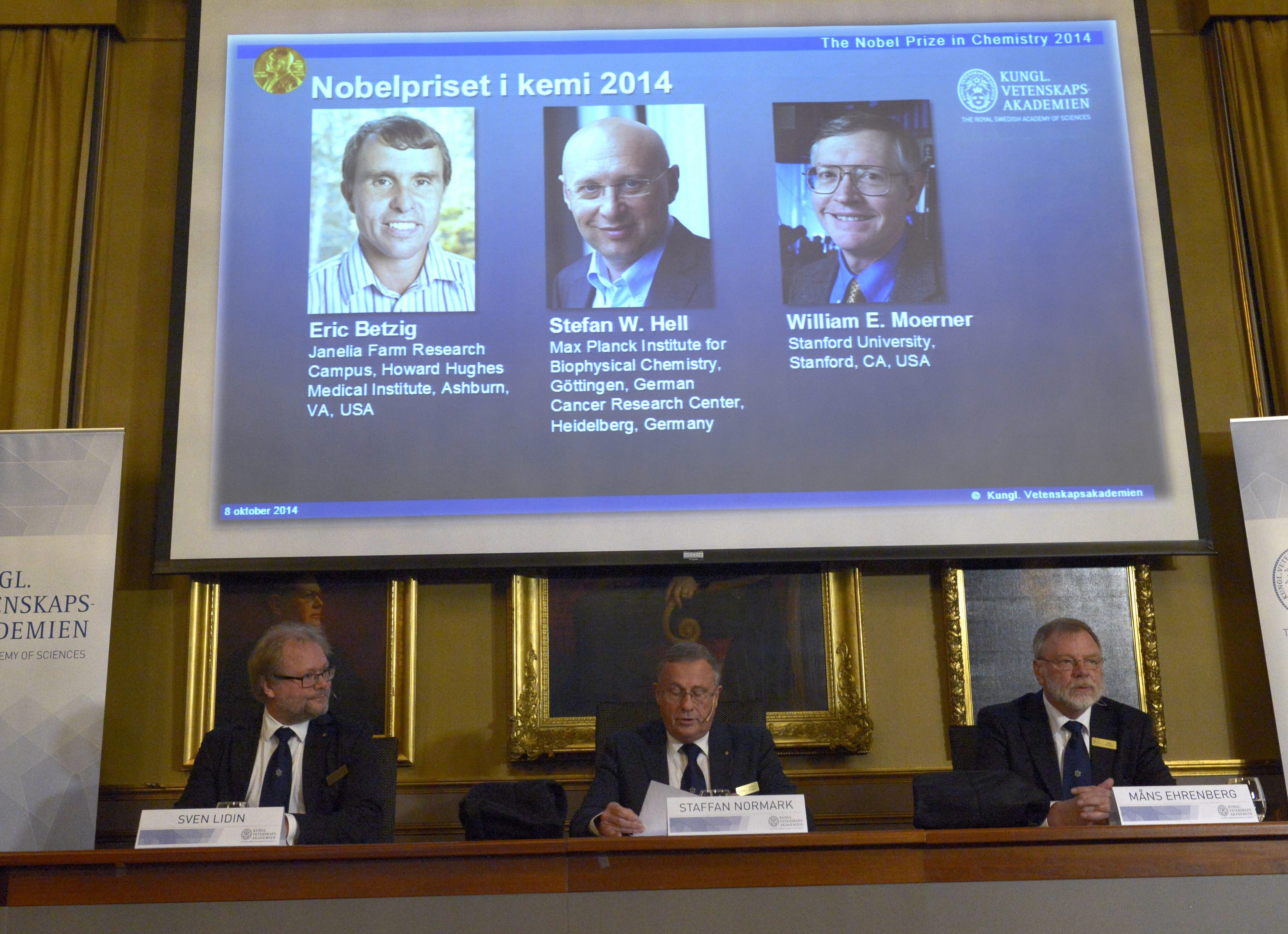 STOCKHOLM -- Americans Eric Betzig and William Moerner and German scientist Stefan Hell won the Nobel Prize in chemistry on Wednesday for developing new methods that let microscopes see finer details than they could before.

Their breakthroughs, starting in the 1990s, shattered previous limits on the resolution of optical microscopes, giving scientists improved tools to study diseases such as Parkinson's, Alzheimer's and Huntington's at a molecular level.

The three scientists will split the 8 million-kronor ($1.1 million) award for "the development of super-resolved fluorescence microscopy," which the Royal Swedish Academy of Sciences said has "brought optical microscopy into the nanodimension."

Betzig, 54, works at the Howard Hughes Medical Institute in Ashburn, Virginia. Hell, 51, is director at the Max Planck Institute for Biophysical Chemistry in Goettingen, Germany. Moerner, 61, is a professor at Stanford University in California.

"I was totally surprised, I couldn't believe it," Hell said. "Fortunately I remembered the voice of Nordmark and I realized it was real," he added, referring to Staffan Nordmark of the Royal Swedish Academy of Sciences.

The Nobel judges didn't immediately reach Moerner, who was at a conference in Brazil. He found out about the prize from his wife after she was told by The Associated Press.

For a long time optical microscopes were limited by among other things the wavelength of light. So scientists believed they could never yield a resolution better than 0.2 micrometers.

But helped by fluorescent molecules, the three scientists, working independently, were able to break that limit, taking optical microscopy into a new dimension that made it possible to study the interplay between molecules inside cells, including the aggregation of disease-related proteins, the academy said.

Each of the laureates has used these methods to study tiny components of life. Hell has studied nerve cells to get a better understanding of brain synapses; Moerner has studied proteins related to Huntington's disease; and Betzig has tracked cell division inside embryos, the academy said.

"We can tell whether (individual molecules are) different or whether they're the same. It's very much like asking whether they all march to the same drummer or not," Moerner told the AP. "When you can watch one by one, then we are able to observe exactly when it changes from one state to another."

Tom Barton, president of the American Chemical Society, said the laureates' work allowed progress in many fields because it let scientists see molecules and other features with unprecedented resolution. And for biology, he noted, it allows researchers to study very fine details of living things. In contrast, while an electron microscope can see even finer details, it can't be used on living cells.

"Before maybe we could just see the contours of bacteria but now we can look inside the bacteria and we can see things as small as individual molecules," said Nobel committee member Claes Gustafsson.

"This technique means that suddenly we can start studying details that we could only dream of before. This is really a revolution because as recently as 15 years ago, it was believed to be theoretically impossible to break this barrier," he said.

This year's Nobel announcements started Monday with U.S.-British scientist John O'Keefe splitting the medicine award with Norwegian couple May-Britt Moser and Edvard Moser for breakthroughs in brain cell research that could pave the way for a better understanding of diseases like Alzheimer's.

On Tuesday, Isamu Akasaki and Hiroshi Amano of Japan and U.S. scientist Shuji Nakamura won physics award for the invention of blue light-emitting diodes - a breakthrough that spurred the development of LED technology that can be used to light up homes and offices and the screens of mobile phones, computers and TVs.

The Nobel Prize in literature will be announced Thursday, followed by the Nobel Peace Prize on Friday and the economics prize on Monday.

The prizes are always handed out in ceremonies on Dec. 10, the date that prize founder Alfred Nobel died in 1896.