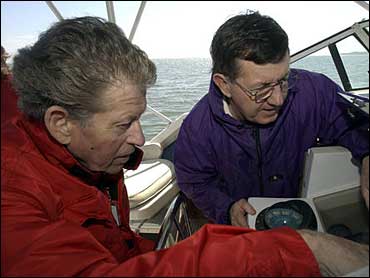 The first government search in decades for a nuclear bomb lost off the Georgia coast in 1958 failed to uncover any trace of the sunken weapon, the Air Force said in a report Friday.

The report released nine months after scientists tested radiation levels in waters off Tybee Island concluded the 7,600-pound bomb cannot explode and should be left at sea.

"The best course of action in this matter is to not continue to search for it and to leave the property in place," said the report by the Air Force Nuclear Weapons and Counterproliferation Agency.

A damaged B-47 bomber jettisoned the Mark-15 nuke into a sound about 15 miles from Savannah in February 1958 after colliding with a fighter jet during a training flight.

The military never recovered the bomb and gave up searching for 46 years until last year, when a retired Air Force pilot claimed his private search team had detected unusually high radiation levels in the sound.

Government scientists investigated the claims, taking radiation readings and soil samples from a football field-sized area of water Sept. 30. The report said varying radiation levels were observed, but they were from natural elements in the sediment on the sea floor.

The Air Force has said the bomb contains an undisclosed amount of uranium and about 400 pounds of conventional explosives, though it lacks the plutonium capsule needed to trigger a nuclear blast.

In a July 2001 report, the Air Force declared the bomb "irretrievably lost" and estimated it lies buried beneath 8-to-40 feet of water and 5-to-15 feet of mud and sand.