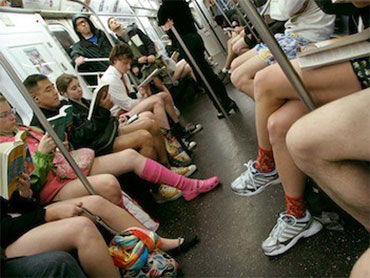 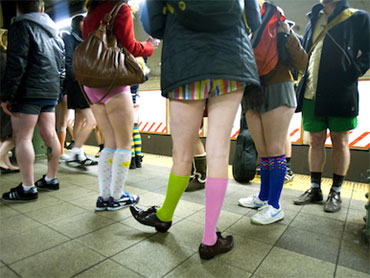 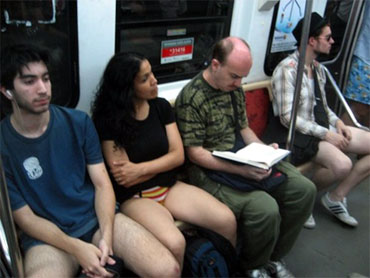 (Improv Everywhere)
NEW YORK (CBS/AP) They came, they saw, they got nearly naked.

Sunday was the ninth annual "No Pants Day" in New York City when hundreds of New Yorkers stripped down to their underwear in crowded city subway trains for a bit of subterranean street theater au naturel.

The crowd braved frostbite and, in past years, arrest.

Many of the guys wore boxers, while the women had on bikini-style undies.

The fully-clothed riders seemed to take their fellow no-pants passengers in stride and the New York City Police Department said officers made no arrests this year.
-
Straphanger Dawn Young said the pants-less riders at the 96th street station looked chilly. Temperatures in New York dipped down to 14 degrees Sunday.

Participants met up at six locations throughout the city for the ninth annual "No Pants Subway Ride."

They formed groups and dispersed to subway stations to catch trains. Once inside the subway cars, they began calmly removing their pants and folding them up. The idea was to act like nothing unusual was going on.

Most people read magazines or chatted with their companions like any other subway rider.

The event started in 2002 with just seven people. It has spread to other cities.

The stunt is organized by Improv Everywhere, a group that says its mission is to cause "scenes of chaos and joy in public places."

Created in August of 2001 by Charlie Todd, Improv Everywherehas "executed over 100 missions involving tens of thousands of undercover agents." The group is based in New York City.

"Improv Everywhere is, at its core, about having fun. We're big believers in 'organized fun,' says the group's Web site. "Our missions are a fun source of entertainment for the participants…We get satisfaction from coming up with an awesome idea and making it come to life. In the process we bring excitement to otherwise unexciting locales and give strangers a story they can tell for the rest of their lives."