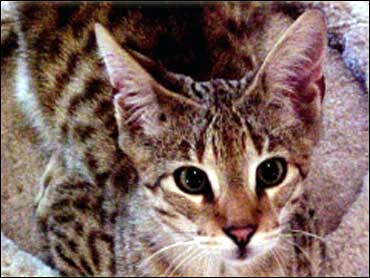 The Savannah has the ears of a bobcat, the spots of a leopard, and can grow to as large as 30 pounds. Furthermore, what's getting a lot of people's attention is that these cats don't seem to act like cats.

Savannahs look like something you might see on a nature show. But they are not considered wild and a growing number of Americans are keeping them as a pets.

After first seeing a Savannah online, Nicole Sanders had to have one.

"It's just amazing to look at the way they walk," says Sanders. "They stalk. They prowl, you know. They growl. The hissing. It's quite amazing."

Some of their decidedly "unfeline" tendencies are part of the appeal of Savannahs. They actually enjoy playing in the water, heartily play fetch, and can be trained to walk on a leash.

During Turner's visit with Sanders, her Savannah, Vicious, exhibited energy to spare. The Savannahs' wild side can be attributed to fact that they are bred from wild cats.

"We take a serval that's native to Africa and breed it to a domestic cat, oftentimes a Bengal cat," explains Dale Hummel, a breeder of hybrid cats. "That creates what we call a first generation Savannah."

Dale Hummel and his wife, Holly, are among the country's top breeders of hybrid cats. Their goal: to breed cats that combine the physical traits of an exotic cat with the behavioral predictability of a domestic or housecat.

"If we don't produce something like this, we're going to get too many wild cats into these homes," says Hummel. "A hybrid cat is so much easier to care for and makes a better pet than a wild animal."

The hybrid cat breeder recommends that anyone with children under the age of five or six avoid the first generation of Savannahs.

"Not that they are at all aggressive, but they aren't going to interact with children as the children would like to," Hummel explains.

The first generation offspring, or F1, produces a cat that weighs 3 to 4 times that of a regular house cat. But this designer kitty comes with a designer price tag. An F1 can cost $6,000 and up.

So, why not just get a regular cat for a lot less money?

"I've had cats in the past and they just kind of sit around and mope," says Sanders. "I call Vicious, he's in my face in two seconds.

"I don't have kids yet. So I was like, 'You know what? I could do the cat thing now. Then I can have kids in the future.'"

While cute, it's important to note that Savannah's are not legal everywhere. Municipalities, counties and even some states have laws banning hybrid breeds. So if you are interested in owning a Savannah, be sure to check with your local, county and state government before buying a hybrid of any kind.

For more information on Savannahs, go to: