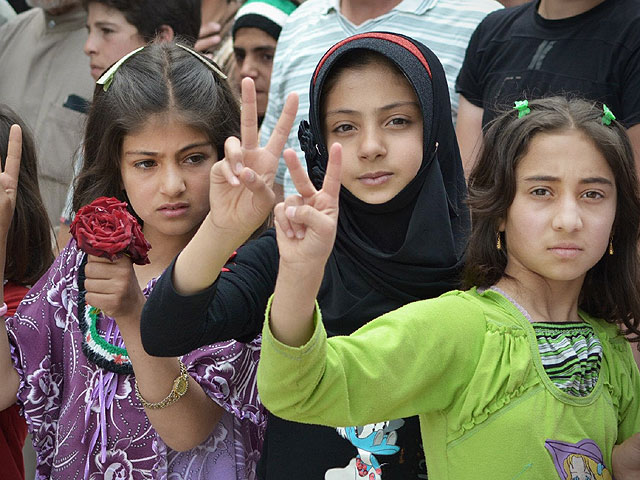 (CBS News) AMMAN - One rebel leader in Syria has issued a 48-hour "ultimatum" to the government to abide by the U.N.-backed peace plan or "face the consequences." Another says there is no such demand.

Meanwhile the fighting goes on, with reports of more shelling in the city of Homs and in Houla - the site of a weekend massacre that saw 108 civilians killed and prompted the latest and perhaps most vocal round of international condemnation.

The reality is that neither the diffuse collection of rebels nor the government nor the outside world can force the endgame in the foreseeable future. The danger, apart from the obvious continued suffering of civilians, is that the conflict threatens to draw in allies and enemies across the region.

The Israelis fear that a collapse into all-out civil war in Syria will leave its stocks of Russian-made weapons, including surface-to-air missiles, and even chemical weapons in what would amount to an "open warehouse" for terrorist groups to pilfer and pillage.

There have been unconfirmed reports that militant Islamic groups are interfering in or trying to gain influence among the rebels, perhaps with an eye on the weapons cookie jar.

Jordan is trembling at the thought of more refugees spilling over its border. There are already an estimated 85,000 Syrians sheltering in Jordan, which can't afford to keep them and doesn't need the possibility of the actual conflict spreading into its already fragile body politic.

The kingdom estimates the conflict has also cost it hundreds of millions of dollars in lost tourism revenue, a mainstay of the economy.

For now, the policy of King Abdullah's government is to deplore the bloodshed, do what it can to help the peace effort and operate a don't-ask-don't tell policy to back the rebels. (Watch Pizzey's report on Syria for "CBS This Morning" at left.)

A hospital set up to help Iraqi refugees is now being used to treat civilian victims who have escaped Syria, and one of the main Syrian rebel TV stations operates from a discreet office in Amman.

Lebanon has already seen an uptick in the sectarian violence that has wracked the nation for decades, with rival Sunni and Alawite groups going head to head in the northern city of Tripoli.

There is also a worry that the Hezbollah movement, which has long enjoyed Syrian and Iranian sponsorship, could somehow be dragged into the melee. The Shiite group is a potent military force that can threaten both Lebanese stability, and Israel.

For Syria itself the greatest peril is that the insurgency will evolve into a full-scale civil war.

United Nations Secretary-General Ban-ki Moon told a conference in Turkey that Syria may have already reached a "tipping point" and could plunge into "a civil war from which the country would never recover."

Sectarian fighting is already happening as the majority Sunnis take revenge on members of the minority Alawite sect.

Militias loyal to the Alawite-dominated government have been blamed for some of the worst atrocities against civilians.

Calls from some politicians in the West to arm the rebels merely add to the uncertainty. There is no clear idea of who the rebels really represent, what their aims are beyond ousting the Assad regime, and whether or not they would seek reconciliation or wreak revenge should that come to pass.

Armed intervention of the sort NATO conducted in Libya is so riddled with pitfalls as to be untenable. Syria has a serious air defense system, designed to protect it from Israel, with whom it is still officially in a state of war. That makes the much-loved idea of a "no fly zone" virtually unworkable, and anyway there is little evidence the Syrian military is using or needs to use significant air power to carry the fight to the rebels.

As for giving the rebels heavier weapons, the rise of warlords and militias in Libya is evidence of the danger of building up rebel forces in hope they will go back to their day jobs when the fighting is over.

The experiences of Iraq and Afghanistan have left Western governments with little inclination to put "boots on the ground." Nor is the U.N. likely to pass any resolution to grant legitimacy to such an escalation, even if the rebels asked for it.

However the scenarios play out, and however long it takes, the options for President Bashar al-Assad are limited. Unless he actually goes all out and smashes the resistance with overwhelming brute force, which would provide little more than a short-term "solution", the best fate he can hope for is a flight into exile. Failing that, he risks ending up on trial like Egyptian President Hosni Mubarak. The longer and more brutally the conflict goes on, however, the more likely he is to face a fate similar to that of Libya's Muammar Qadaffi.

The best hope of ending the conflict may well be to convince him to take option one, and then find a way to find a place for him and his family to go.

Unfortunately for Syrians of all political allegiances, however, the immediate prospect is for things to get a lot worse.