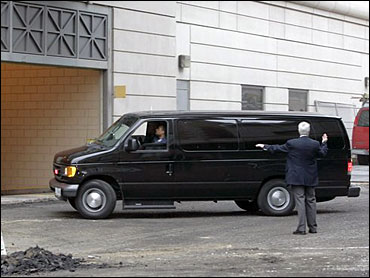 Six men arrested this week and charged with plotting to massacre soldiers at Fort Dix were ordered held without bail on Friday.

Prosecutors argued that the men, all born outside the United States, pose a flight risk.

The men — four of them ethnic Albanians from the former Yugoslavia, one from Jordan and one from Turkey — have been held at a federal detention center in Philadelphia since their arrest Monday night.

Five of the men are charged with conspiring to kill uniformed military personnel, an offense punishable by life in prison. They are Mohamad Ibrahim Shnewer, 22; Serdar Tatar, 23; Dritan "Anthony" or "Tony" Duka, 28; Shain Duka, 26; and Eljvir "Elvis" Duka, 23,

Agron Abdullahu, 24, is charged with helping illegal immigrants obtain weapons, and could face 10 years in prison if convicted.

Assistant U.S. Attorney Stephen Stigall argued against letting Shnewer be released on bail to the custody of his parents while awaiting trial.

"The problem with this package is that the actions that are alleged were going on at that house," he said.

Friends and relatives of Shnewer offered to post several properties they own worth a total of about $600,000 as collateral to support bail for him.

A more detailed bail hearing will be held next Thursday for Abdullahu, who faces the least serious charges of the six.

Authorities say the men were preparing to buy automatic weapons to use in an attack on Fort Dix when they were arrested. They targeted the Army post, which is 25 miles east of Philadelphia and primarily used to train reservists, partly because one of them had delivered pizzas there and was familiar with the base, according to court filings. The objective: to kill "as many American soldiers as possible."

The men, all in their 20s, have lived in and around Philadelphia for years, worshipped at moderate mosques, have family members close by and worked blue-collar jobs installing roofs, driving a cab, delivering pizzas and baking bread.

Defense lawyers for some of the men said they are considering attacking the prosecution's heavy reliance on two paid informants who infiltrated the group more than a year ago and recorded conversations with the defendants.

Attorney Rocco Cipparone, who is representing defendant Mohamad Ibrahim Shnewer, whom he described as a "hardworking cab driver," said he'll look into "the role of paid informants and how aggressive they were in potentially prodding or moving things along."

Authorities said they first learned about the men in January 2006 after a tip from a clerk at a Mount Laurel electronics store. The clerk called local police because a home video the men wanted transferred to a DVD looked like it might have terrorist links, U.S. Attorney Christopher J. Christie said.

Earlier this year, authorities said, the men took a training trip to the Pocono Mountains in Pennsylvania, where they fired weapons and played paintball to prepare for an attack.

In the wake of 9/11, more than 400,000 names have come under one form of government surveillance or another, from watch lists to wiretaps, reported CBS News chief investigative correspondent Armen Keteyian.