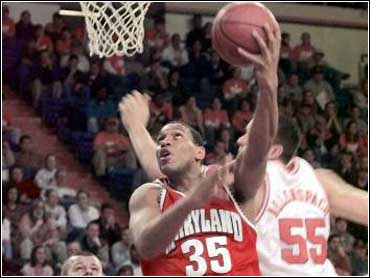 It was supposed to be a showdown between two standout sophomore guards. Instead, it was another sophomore, Maryland's Lonny Baxter, who stood out.

Baxter scored 25 points Tuesday night, leading No. 19 Maryland to a 76-63 victory over Clemson.

The strategy was simple, Baxter said.

"We just pounded the ball inside. That's what starts our offense," he said.

Baxter scored 16 points before halftime, single-handedly staving off a Clemson rally midway through the first half.

"Baxter took the game over inside unlike any other player we have faced this season," said Clemson coach Larry Shyatt.

The Tigers slowed by starting the second half in a zone, but he came on again late in the game. Baxter's fast break dunk with 3:43 left gave Maryland its biggest lead at 74-52.

Maryland reached the bonus with 13:31 left, and Clemson was in the bonus 17 seconds later.

"I think we fouled," Maryland coach Gary Williams said. "Clemson is a good team. Adam Allenspach, to his credit, he's a guy who has improved every yearHe's a problem for us inside."

"Blake did a very good job as far as when to shoot and when to pass," Shyatt said. "He didn't force any shots. Our guys knew when to shoot. When we are open, we are supposed to shoot."

Clemson was paced by Allenspach's 20 points and 10 rebounds.

The win extended Maryland's ACC win streak to seven games and was the Terrapins' fifth straight over the Tigers.