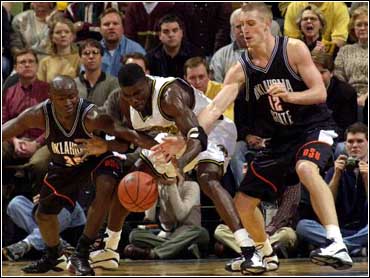 Desmond Mason had 25 points and nine rebounds, but the 10th-ranked Cowboys had to hold off a furious late rally by Missouri for an 84-72 victory Monday night.

"We seem to do things the hard way all the time," Mason said. "We have to get that killer instinct because in the NCAA tournament, everybody's good.

"We have to go out there and put people away early and show we mean business."

The Cowboys seemingly pulled away by hitting 10 of their first 12 shots after the break. It was 61-41 with eight minutes to go.

"You look up in the stands and people are leaving, packing their bags and going home," Missouri guard Brian Grawer said. "It's easy just to fold."

The gap was still 14 when the Cowboys had a shot clock violation with 2:30 to go.

Missouri hit five 3-pointers the rest of the way, and trailed by only four at 76-72 after Kareem Rush connected with 51 seconds to go. Oklahoma State escaped when Mason answered with a dunk after a length-of-court pass from Doug Gottlieb and scored the game's final seven points.

"Missouri hit a couple of treys and it was contagious," Oklahoma State coach Eddie Sutton said. "Those guys can shoot the basketball.

"There's no college team in American that can beat them in a game of horse."

Brian Montonati added 16 points and 11 rebounds and Gottlieb had 12 assists for the Cowboys (22-3, 11-2 Big 12), who have won eight of nine. Oklahoma State, which leads the Big 12 by a half-game over Iowa State and Texas, overcame a season-high 24 turnovers.

"They're a great team," Missouri coach Quin Snyder said. "There's not a lot of mystery what happened."

Oklahoma State, which also got 21 points from Joe Adkins and 12 from Glendon Alexander, was 2-26 at the Hearnes Center.

The Big 12's top defense stifled the Tigers until the late going. Missouri began 1-for-13 and shot 34 percent overall, their worst showing in conference play.

"We take great pride in our defense," Montonati said. "Our perimeter guys are outstanding guarding the 3-point shots. It was a big key in the game."

Rush, who averaged 25 points last week, was held to 13. Gilbert, averaging 13 points, missed his first eight shots and finished 1-for-11 with three points.

"That's going to happen," Grawer said. "The unfortunate thing is it happened to more than one or two individuals on the team."

Mason hit a 3-pointer just before the halftime buzzer for a 28-23 lead and had two more baskets in the opening 1:33 of the second half to help Oklahoma State open the gap. Alexander's 3-pointer gave Oklahoma State 10 baskets in 12 shots to start the half and a 54-37 lead with 11:18 to play.

Oklahoma State had a surprisingly tough time in the first half considering Missouri's horrid start. The Cowboys shot 48 percent, held Missouri to 28 percent shooting and had a 19-11 rebounding advantage, but hurt themselves with 13 turnovers.

Missouri didn't make a conventional basket until Pat Schumacher made a layup with 8:28 to go in the half, but shot 50 percent the last 10 minutes to get back in.