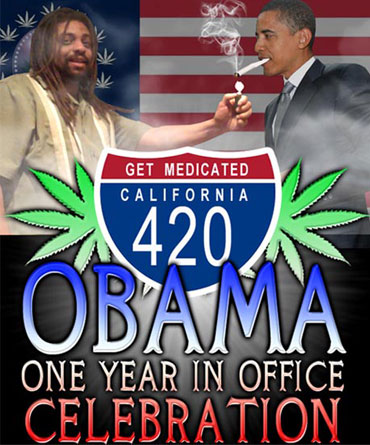 (NJ Weedman)
NEW YORK (CBS) President Obama has taken a lot of heat for his hard-to-kick smoking habit, but Ed Forchion, a California transplant, thinks Obama should keep on smoking - and not just cigarettes.

Forchion, who goes by the name NJ Weedman, is throwing the "Obama One Year in Office Celebration" to highlight what he calls the "2010 Reefer Revolution" or perhaps more accurately - isn't it great that California is letting him smoke all this weed?

Forchion runs a marijuana dispensary/cannabis ministry in Hollywood called the Liberty Temple, which seems to dish out religious and political philosophy in support of smoking dope, but mostly just sells pot to people with medical prescriptions.

In California, marijuana can be legally prescribed by doctors and sold by licensed vendors.

"I threw my support behind Obama during his candidacy and now I'm throwing this party for him!," he told Hype Magazine. "President Obama made history when he ended the federal raids on California's dispensaries. Employees and patients alike who operated in fear can now partake in peace in the healing science, art and practice of marijuana smoking."

No word from the White House on whether they will take action against the Weedman for putting Obama's joint-smoking visage on the party poster, but if the Commander-in-Chief wanted to stop by for the March 6 event, he'll need a marijuana medical card. And if Michelle comes along, she can bring a friend. It's ladies two for one.