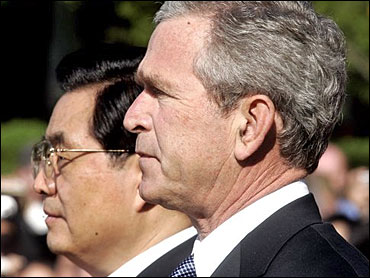 Cassette copies of President Nixon's secretly recorded tapes, previously available only as transcripts, went on sale Friday at $18 a pop. As CBS News Correspondent Eric Engberg reports, the public has finally been given the opportunity to listen in on one of the darkest chapters in American history.

Until now the public only could listen to them if they went to the National Archives in College Park, Md. Copying was prohibited. So besides a few bootleg tapes illegally broadcast years ago and snippets of recordings played in court and at Nixon's California library, the tapes have not been aired publicly.

Listeners will hear coffee cups clinking on saucers, the pounding of desks and clearing of throats. They will hear the famous "smoking gun" conversation about Watergate that led to Nixon's resignation. They will listen to the infamous tape erasure -- a full 18-and-a-half minutes of buzzes and clicks.

The quality is sometimes poor, but some famous Watergate moments ring clear, like the chat between Nixon and former White House counsel John Dean, who tells the president: "We have a cancer - within - close to the presidency that's growing."

John Dean speaks with Nixon.
Only months before that the voices are calm. Discussing, in businesslike tones, ways to keep the FBI from learning that higher-ups were behind the bugging of Democratic headquarters. Nixon's chief of staff, H.R. Haldeman, tells him, "The FBI is not under control."

H.R. Haldeman and Nixon.
The President's solution was to raise a false claim of national security with an order to the CIA to tell the FBI to stop investigating. "And that they should call the FBI in and say that, we wish for the country, don't go any further into this case, period," Nixon is heard saying.

That ploy fails. While overseeing the cover-up, Dean soon starts getting hush money demands from the burglars. His words to Nixon still chill some 27 years later.

Dean: "One: we're being blackmailed. Two: people are going to start perjuring themselves very quickly."

"I don't thinthere's ever been a conversation in the Oval Office in its entire history quite as damning as that conversation," Dean says today. "It sounds like two mobsters sitting there talking."
Nixon: "You could get a million dollars, and you could get it in cash. I know where it could be gotten."

Dean remembers, "I hoped he would, you know, his fist would come down on his desk and say, 'I want this ended immediately.'"

Nixon: "The question is, who the hell would handle it?"

Nixon: "Any ideas on that?"

"What I was finding was another co-conspirator, rather than somebody who was ready to end the conspiracy," Dean notes.

The cover-up falls apart within weeks. Dean tells all to prosecutors, and Nixon worries -- in a phone call to Haldeman dripping with fear and irony -- that Dean has carried a tape recorder into their meetings.

Nixon: "Even the smallest ones are bulky enough that, you mean, with a fellow like Dean you'd sort of see that wouldn't you? Where do you carry 'em, in your hip pocket?"

Haldeman: "It's so remote as to be almost beyond the realm of possibility."

Nixon: "In this matter nothing is beyond the realm of possibility!"

Consumed by the Watergate scandal (largely because these tapes proved the worst), Richard Nixon would resign the following year.

So far, 264 of the 3,700 hours of Watergate and "abuse of government power" tapes can be purchased. These contain conversations about the break-in and bugging of the Democratic National Committee headquarters in the Watergate in 1972, the subsequent cover-up and wrongdoing by the White House.

The Nixon estate believes the tapes should be heard in context - in chronological order.