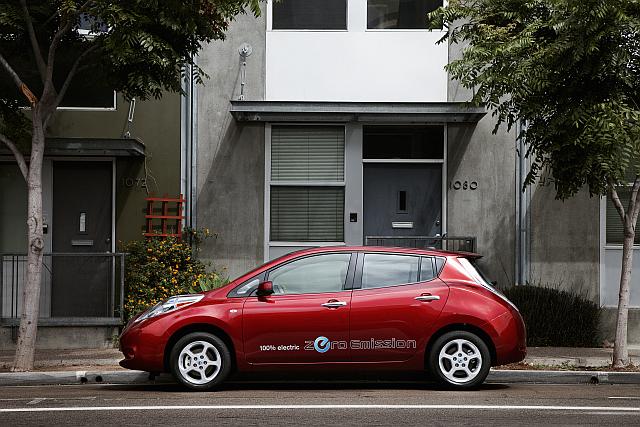 (AP) NEW YORK - Nissan (NSANY) is offering cheap leases and big discounts on the Leaf because of slow sales of the all-electric car.

It also has a big inventory of the cars nationwide. At the end of August it had enough 2012 models in stock to supply dealers for 114 days, according to Ward's AutoInfoBank. Automakers consider a 60-day supply to be optimal.

Also, the TrueCar.com auto pricing site says Nissan raised discounts to $3,250 per Leaf in August from $850 in January.

The Leaf, which can go up to 100 miles on battery power from a single charge, starts at $36,050, including shipping.

Nissan joins General Motors (GM), the maker of the Chevrolet Volt in offering cheap leases and big discounts on electric cars. The Volt is the Leaf's main competitor and Chevrolet is discounting the $40,000 car by up to $10,000, including a $249 per month lease deal.

The slow sales are a clear sign that Americans won't buy the expensive electric cars en masse unless the prices are cut, making them competitive with conventional vehicles. With the discounts, Volt sales have quadrupled this year to more than 13,000.

Both cars are eligible for a $7,500 federal tax credit for electric vehicles. The credit is not included in the discounts.

Leaf sales were hurt in part because the company sent vehicles to all 50 states this year, cutting supplies to California, the No. 1 Leaf market last year, said David Reuter, a Nissan spokesman. The company sold almost 10,000 Leafs last year and had hoped to double that this year, he said.

"The sales overall have not met our expectations, but we're working hard to keep pushing," Reuter said.

About 70 percent of Leaf sales in the U.S. are purchases, with the rest leases, he said.

The discounts are on 2012 models. The 2013 models won't be at dealers until early next year, when Nissan begins producing them at a factory in Tennessee, Reuter said.

But Reuter said all lithium-ion batteries, including those that power other electric cars and consumer electronics, lose capacity over time. The cars that were replaced had thousands of miles on them and the battery storage capacity loss was normal, he said.