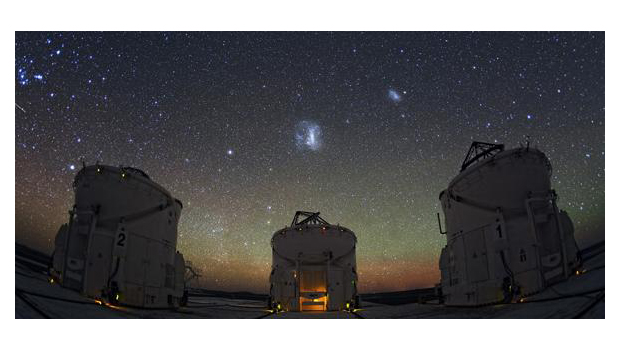 Scientists have identified nine celestial objects they believe could be dwarf satellite galaxies orbiting the Milky Way. This is the most found at one time, and the first new ones spotted in a decade.

The team of researchers in the United States and the United Kingdom believe the galaxies could hold the key to understanding dark matter and shed light on how larger galaxies - which are collections of gas, dust and billions of stars held together by gravity - are formed.

"The discovery of so many satellites in such a small area of the sky was completely unexpected," Cambridge's Institute of Astronomy's Sergey Koposov said. "I could not believe my eyes."

Researchers with the Dark Energy Survey, headquartered at the U.S. Department of Energy's Fermi National Accelerator Laboratory, and an independent group from the University of Cambridge jointly announced the discovery. Both teams used data taken during the first year of the Dark Energy Survey, a five-year effort to photograph a large portion of the southern sky in unprecedented detail.

It mainly uses the Dark Energy Camera, which - at 570 megapixels - is the most powerful digital camera in the world, able to see galaxies up to 8 billion light-years from Earth. Built and tested at Fermilab, the camera is now mounted on the 4-meter Victor M. Blanco telescope at the Cerro Tololo Inter-American Observatory in the Andes Mountains in Chile.

"The Dark Energy Camera is a perfect instrument for discovering small satellite galaxies," said Keith Bechtol of the Kavli Institute for Cosmological Physics at the University of Chicago, who helped lead the Dark Energy Survey analysis. "It has a very large field of view to quickly map the sky and great sensitivity, enabling us to look at very faint stars. These results show just how powerful the camera is and how significant the data it collects will be for many years to come."

Satellite galaxies are small, celestial objects that orbit larger galaxies, such as the Milky Way. They are difficult to spot and these new objects are no exception. They are a billion times dimmer than the Milky Way and a million times less massive. The closest of them is about 100,000 light-years away.

Scientists have previously found more than two dozen satellite galaxies around our Milky Way. The Sloan Digital Sky Survey, the precursor to the Dark Energy Survey, discovered about half of them in 2005 and 2006.

While more analysis is required to confirm any of the observed celestial objects as satellite galaxies, researchers believe their size, low surface brightness and significant distance from the center of the Milky Way makes them excellent candidates. And while they work to confirm these galaxies, scientists are hopeful that could find as many as 30 more of them in the future.

These tiny galaxies often with fewer than 100 stars are considered crucial to understanding dark matter - a mysterious material that has mass but cannot be seen. It makes up a quarter of the universe, but so far experiments in space and on Earth have failed to confirm its presence.

Dwarf satellite galaxies are considered dark matter-dominated, meaning they have much more mass in unseen matter than in stars. Among the theories is that dark matter might consist of particles that annihilate each other and release gamma rays.

"Dwarf satellites are the final frontier for testing our theories of dark matter," said Vasily Belokurov of the Institute of Astronomy, one of the study's co-authors. "We need to find them to determine whether our cosmological picture makes sense. Finding such a large group of satellites near the Magellanic Clouds was surprising, though, as earlier surveys of the southern sky found very little, so we were not expecting to stumble on such treasure."