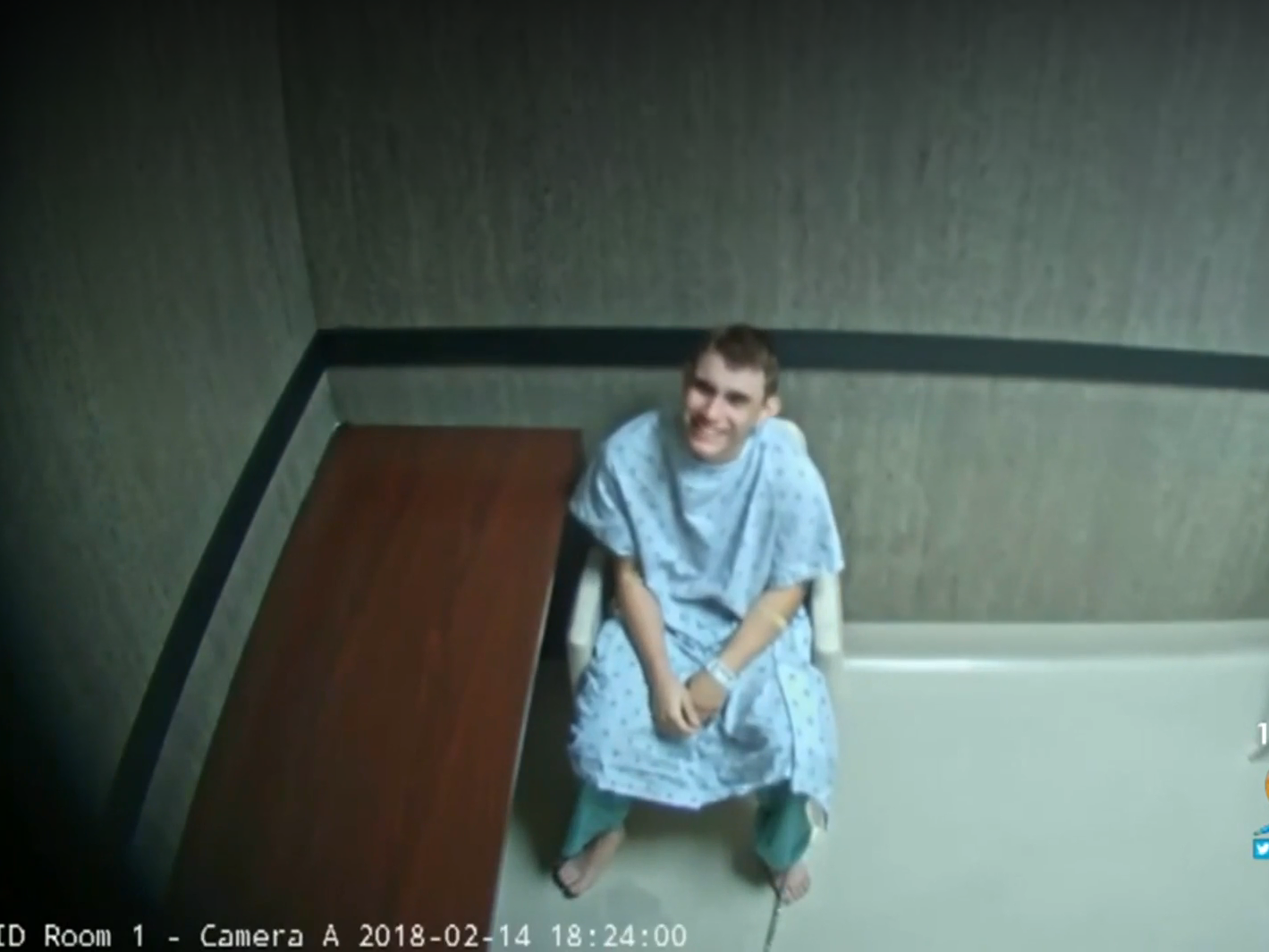 SUNRISE, Fla. -- Prosecutors on Wednesday released hours of video interrogation of Florida's school shooting suspect, footage showing the young man slouching in a chair, being repeatedly urged by a detective to speak louder and punching himself in the face when he is alone.  Wednesday's release came after several delays.

The footage contained the same material as a transcript released earlier in the week, and both were edited to remove what authorities say was a direct confession by Nikolas Cruz to the Feb. 14 massacre at Marjory Stoneman Douglas High School in Parkland.

In the video, Cruz told the detective that he has long heard a voice or a demon in his head and that that voice told him to burn, kill and destroy, CBS Miami reports. The detective told Cruz, after lengthy questioning, that he doesn't believe Cruz hears a voice and that he's using the voice as an excuse for the violence.

Cruz also claimed that he had designs on another violent attack, planning to shoot up a park a week before the mass murder at Stoneman Douglas. Cruz at one point early on, while alone in the interrogation room, says to himself "kill me" and "I want to die."

Also on the video, Cruz's brother Zachary is allowed into the interrogation room and the brothers discuss what happened earlier that day and how their mother would have reacted to it.

In other developments, a sheriff leading the state commission investigating the massacre said Wednesday that the suspect's behavior before the shooting was a "roller-coaster," where he would have stretches of good conduct before it deteriorated.

Pinellas County Sheriff Bob Gualtieri told the Marjory Stoneman Douglas High School Public Safety Commission that Cruz's fluctuating behavior through the years made it difficult for school officials to determine how he should be handled. Cruz, a 19-year-old former student at Stoneman Douglas, is charged with killing 17 people in the Valentine's Day attack there.

"It was really a roller-coaster with Cruz really from birth," Gualtieri said. A report released last week by the Broward County school district said he began showing behavioral issues that got him kicked out of pre-kindergarten. He spent his school years shuttling between regular campuses and those for children with emotional and behavioral problems. "He had some really bad low times but at times he was without behavioral issues," Gualtieri said.

The video made public Wednesday shows Cruz hunched over at times, leaning back at others. He is seen wearing hospital clothes and speaking so softly at the beginning that Broward Sheriff's Detective John Curcio has to repeatedly urge him to talk louder. At one point shortly after entering a small interrogation room, the detective asks Cruz: "You all right? Got to be able to speak so I can hear you."

At one point, with the police out of the room, the video shows Cruz take two fingers, put them to his left temple and pretend to pull a trigger. He gave a little shake after doing this. Later, he is seen punching himself hard in the face with both hands and occasionally scratching at his right arm with a small object he picked up off the floor.

Much of the interrogation focused on a demonic voice Cruz claims he has heard inside his head for years that urges him to commit violent acts. When asked what the voice usually said, Cruz answered, "Burn. Kill. Destroy." He also said the voice told him to cut himself.

Earlier, at Wednesday's public safety commission session, Gualtieri said there were times in middle school and at Marjory Stoneman Douglas High School that Cruz's behavior "dive-bombed," and he required an escort to monitor him.

Gualtieri didn't go into details Wednesday, but it has been previously reported that Cruz got into fights, committed vandalism, cursed teachers and drew a swastika on his backpack. Administrators conducted a threat assessment of him in 2016, about five months before he was kicked out of the school.

The 14 appointed members and five ex-officio members will learn more about Cruz's educational, mental health and medical history during a closed session Thursday as they conclude their monthly two-day meeting.

The commission must file a report with its findings of what led to the shooting and recommendations for system improvements by Jan. 1. Commission members include law enforcement and educational officials, mental health professionals, a legislator and two parents of students who died in the attack.

Guy Grace, the security head for the Littleton, Colorado, school district, presented the commission Wednesday with suggestions for improving safety at Florida's schools. He said his district boosted security after the 1999 shooting at Columbine High School that left 13 dead plus the two student attackers. He said measures can range from high-tech solutions such as camera systems that can alert monitors to potential problems to simply making doors easier to lock. Stoneman Douglas teachers complained after the shooting that their classrooms couldn't be locked from the inside - they had to go into the hallway with a key.

Grace said his district has also issued devices to all staff members allowing them to initiate a lockdown at their schools.