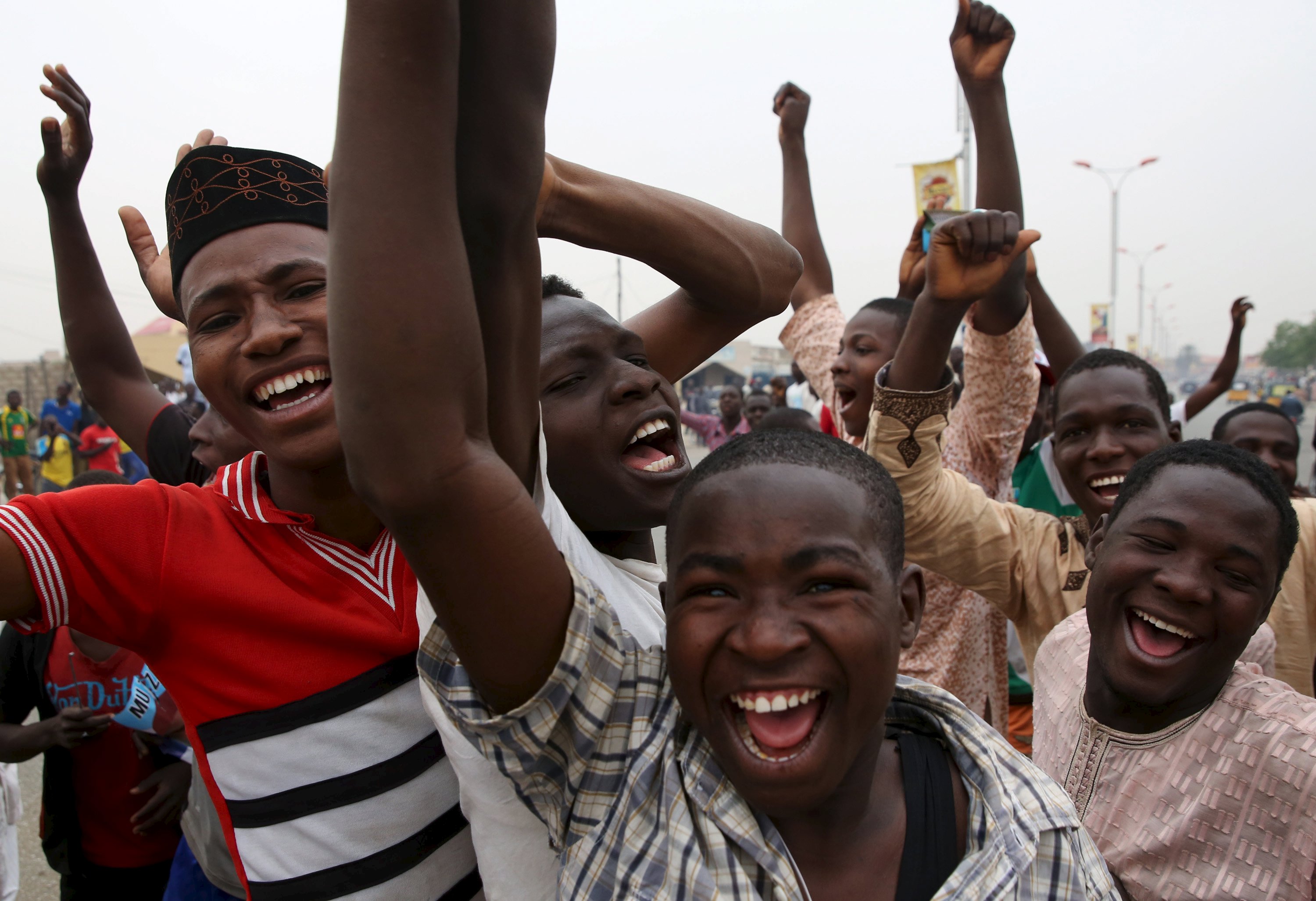 ABUJA, Nigeria -- Nigeria's aviation minister says President Goodluck Jonathan has called challenger Muhammadu Buhari to concede and congratulate him on his electoral victory. This paves the way for a peaceful transfer of power in Africa's richest and most populous nation.

Celebrations erupted all over Buhari's strongholds in northern Nigeria and around Buhari's campaign headquarters in Abuja. Cars honked and people waved brooms in the air - a symbol of Buhari's campaign promise to sweep out Nigeria's endemic corruption.

Jonathan called Buhari, 72, to congratulate him Tuesday evening, thus conceding defeat, Aviation Minister Osita Chidoka told The Associated Press. Chidoka is close to the man who has governed Nigeria for the past five years.

Jonathan was to make an address to the nation and Buhari was preparing to address a news conference.

This is the first time in Nigeria's history that an opposition party has democratically taken control of the country from the ruling party - a sign of the West African nation's maturing young democracy. Jonathan's party has governed since decades of military dictatorship ended in 1999.

Jonathan's concession comes before the final announcement of election results by the Independent National Electoral Commission.

Results of all but one of the 36 states and the Federal Captial Territory show Buhari, a former military dictator, dealing a crushing defeat to Jonathan.

Earlier, Buhari's spokesman Garba Shehu told The Associated Press that Buhari feared his victory could be stolen by "tricks" from the government. Jonathan's campaign has denied a warning from Britain and the United States Monday that they suspected possible political meddling in the final tally of votes from Saturday's election.

Tuesday evening, results from 35 states and the small Federal Capital Territory amounting to some 28 million votes showed Buhari leading by 2 million votes. Buhari is expected to carry the sole remaining state, northeast Borno that is the birthplace of Boko Haram and has 1.4 million eligible voters.

Electoral officials broke off the count saying it would take up to two hours for Borno results to arrive.

Buhari crucially carried Lagos state, Nigeria's commercial hub with the largest number of voters, according to results announced Tuesday though fewer than one third of voters participated.

Britain and the United States warned Monday of the possibility of political meddling in the final count. Jonathan's campaign spokesman Femi Fani-Kayode said that was "absolute balderdash" and demanded evidence.

Garba said the opposition party's agents at more than 150,000 polling stations across the country "tell us that we have won, but our victory is still threatened." The winning candidate must take more than half of all votes and at least 25 percent of votes in two-thirds of the 36 states and the Federal Capital Territory at Abuja.

The austere and strict retired general, who says he is a convert to democracy, has promised that if he wins he will stamp out an insurgency in the north waged by Boko Haram, a homegrown Islamic extremist group that has killed thousands of people, many of them civilians, has kidnapped even young girls, and has pledged fealty to the so-called Islamic State.

Critics and supporters agree that Buhari is the one leader who did not treat the country's treasury as a personal piggy bank. During his brief 1984-1985 dictatorship he rule with an iron fist, jailing people even for littering, and ordering civil servants who arrived late to work to do squats. He gagged the press and jailed journalists to cover up a deepening economic crisis as prices tumbled for the oil on which Nigeria's economy depends. He eventually was overthrown by his own soldiers.

Nigeria's 170 million people are divided almost equally between Christians mainly in the south and Muslims like Buhari who dominate the north. Buhari for the first time won states in the southwest and even took one third of votes in a southeastern state - an unprecedented development that some say reflects more of an anti-Jonathan than a pro-Buhari sentiment.

The vote counting in Abuja was disrupted Tuesday by a representative of Jonathan's party who protested that the proceedings were partial to Buhari. "We have lost confidence in you. You are tribalistic! You are partial!" shouted former Cabinet minister Peter Godsday Orubebe to the chairman of the electoral commission counting the vote. The opposition has also complained that electoral officials are partisan. The count is being carried out in the presence of party representatives, national and international observers and media.

There have been delays in about a dozen states sending results to the counting center because of logistical challenges that had election material being delivered by air, road, speedboat, mules and camels, spokesman Kayode Idowu of the Independent National Electoral Commission told AP.

Buhari's showing in his fourth bid to become president was boosted by the formation of a coalition of major opposition parties two years ago. Its choice of Buhari as a single candidate presented the first real opportunity in the history of Nigeria to oust a sitting president.

Buhari also was able to count on considerable voter dissatisfaction with the performance of Jonathan, who has been president since 2010.

"If indeed Buhari becomes president, it sends a clear message to the people in government that you cannot take the people of Nigeria for granted and that Nigerian democracy is maturing," said journalist and political analyst Kadaria Ahmed.

She said Jonathan's perceived insensitivity to the suffering of citizens caught up in the mayhem of Boko Haram's uprising where some 10,000 people were killed last year and more than 1.5 million people have been driven from their homes.

The Nigerian military, with help from regional troops, forced Boko Haram out of areas the insurgent had taken in recent months as they formed their self-styled "caliphate."

Because of decades of military dictatorship, this is only the eighth election since the country won independence from Britain in 1960, and the fifth since democracy was restored in 1999.