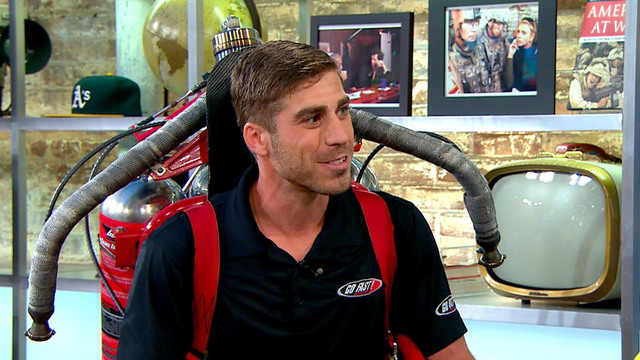 According to Nick "The Jet Pack Man" Macomber, it won't be long before people will be able to fly short distances in their own machines.

"We're realistically a year or two away, I would say," Macomber said Wednesday on "CBS This Morning."

Visions of a world with personal flight are a long-running fixture in movies and television. Jet packs have been celebrated in cartoons, spy movies and futuristic science-fiction flicks, but the reality is that dream has been slow to take off, until now.

"This technology was developed in the '50s and '60s, but [at] Go Fast Sports and Jet Pack International, we're working on something that can fly for 30 minutes," Macomber said.

He said they've built a prototype that uses a turbine-based platform.

"It's a different configuration, but it's definitely a game-changer," Macomber said.

Macomber is at the forefront of the sport.

Ahead of the 2012 London Olympics, he took to the sky, flying the flame in the torch relay past London's National Space Centre.

He made history over the weekend conducting the first successful jet pack flight in China as part of an innovators summit. Someday, Macomber hopes to fly over the Great Wall of China.

Now he is featured in a new Smithsonian Channel documentary, "Incredible Flying Jet Packs" that explores this new frontier.

Cameras were rolling as he set the world record for the highest jet pack flight from a building. He circled the 45th floor rooftop of The Four Seasons Hotel in Denver.

"The consequences are so much more at that height. If I'm 20 feet off the ground and I fall out of the sky, I break my legs, but I still live on a normal flight. If I fell out of the sky there, it's game over," Macomber said.

Right now, Macomber can soar up to about 150 feet in the air. Flight time is limited 28 seconds because it takes an enormous amount of fuel to lift him off the ground.

"I'm constantly battling this thrust to weight ratio and the more fuel I add in the machine, the longer I can fly, but then I get to a point where I don't get off the ground," Macomber said.

He said the jet pack is about 65 pounds and twice that when fully loaded with hydrogen peroxide.

But with about 130 flights under his belt, he said it's just like riding a bike.

Visit the "CBS This Morning" Facebook page where Macomber answered your questions about safety the future of this technology.