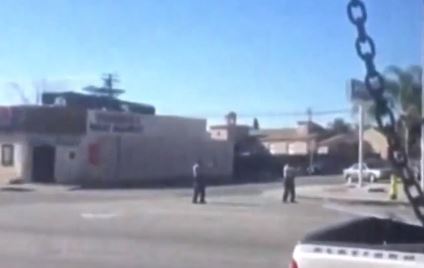 LYNWOOD, Calif. -- Two sheriff's deputies fired their weapons at least 25 times and a man -- reportedly wielding a gun -- was killed Saturday in Lynwood outside Los Angeles.

The man was pronounced dead at the scene.

At a press conference on Sunday, officials said the suspect's name is Nicholas Robertson, a 28-year-old from Compton. Relatives told CBS Los Angeles he is a father of three.

Officials said at the press conference would only say Robertson had "prior contact with the judicial system," but declined to provide details.

The incident was on the motel-lined commercial street, about seven blocks south of the 105 Freeway.

Authorities said deputies were dispatched to the area following reports of a "man with a gun" and "shots fired" call. Robertson is accused of shooting his gun into the air and acting erratically.

A graphic cellphone video of the incident appears to show two officers firing as many as 33 times at the suspect, reports CBS News' Chris Martinez.

Early in their confrontation, Robertson falls to the ground and after a short interval he is seen crawling on his stomach as he is repeatedly struck by additional gunfire from police.

The suspect was described by various callers as a black male wearing a checkered shirt.

Deputies approached the suspect in front of a busy Arco station. They said the suspect refused multiple orders to drop his gun.

Authorities also said the suspect pointed his weapon -- a loaded .45 -- at deputies.

At their Sunday afternoon press conference, Los Angeles officials say video shows the suspect had his gun on him during the entirety of the incident.

"The shooting of Robertson comes on the heels of the Chicago Police videotaped release of the shooting of Jacquan McDonald and is eerily similar," Hutchison said, "You have a suspect that's on the ground and subdued yet officers still keep pumping bullets into him. This is both reckless and excessive use of force. And given tension in the community over these types of shootings it makes it even more urgent that Lacey conduct a full, fast and impartial investigation and quickly release her findings."

CBS Los Angeles spoke to Robertson's friends and family at the scene.

"They shot him in his shoulder, and he was crawling to this gas station," said Pamela Brown, Robertson's mother-in-law.

She doesn't believe Robertson had a gun and she doesn't understand why deputies fired so many rounds.

"He left three kids behind," she said, "Two daughters and a son. What? They could have Tased him, or anything."

Robertson's wife declined to speak with the Associated Press, providing only a photo of their children. Earlier, she told the Los Angeles Times that her husband was a stay-at-home father who didn't engage in crime.

"Anytime you see him, you see him with the kids," Nekesha Robertson said. "He'd take them to and from school. Help them with homework. He's a daddy -- that's his job. He didn't do nothing else."

Nekesha Robertson said her mother-in-law had called her shortly before the shooting to say her husband was under the influence of alcohol. She said she was on her way to get him and had stopped at the same gas station to buy milk before the shooting happened.

Other relatives said the shooting was unjustified and that Robertson may not have heard the deputies' call to drop the gun.

"This man never turned at you and looked at you or pointed the gun at you. Nothing," said Nekesha Robertson's cousin, Monica Reddix. "What they did yesterday was ... point-blank murder."

Several people gathered at the scene calling the shooting unjustified and accusing the deputies of excessive force.

In a statement. LA County Sheriff Jim McDonnell said, "I want to assure the public that the Sheriff's Department takes deputy-involved shootings very seriously and this investigation will be handled with the utmost professionalism and integrity. In this modern age of cellphone video and instant analysis on the internet I would ask that we keep in mind that a thorough and comprehensive investigation is detailed and time intensive. Our number one priority is public safety."

Meanwhile, Brown said even though it won't bring her son-in-law back, she wants answers.

"I'm not mad at them," she said, "but you should have handled this in a different way."