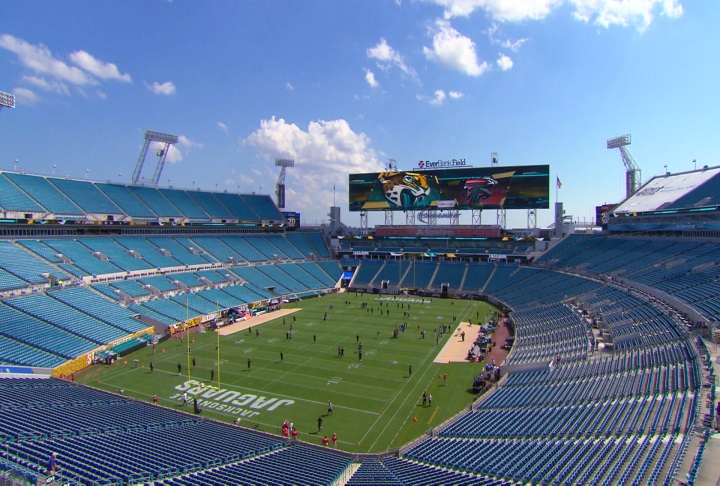 The NFL is a robust $10 billion dollar a year business.

But now, many of the league's 32 teams are facing a new challenge: getting fans off the couch and back in the stands, reports CBS News correspondent Mark Strassmann.

The Jacksonville Jaguars are 0-6 this season and haven't had a winning record since 2007.

Their history of losing has hurt attendance, so this year the team decided to reinvent the experience of coming to a game, not unlike others in the NFL.

"The NFL has to find a way to strike a balance that will keep people coming to the stadium while at the same time not undermining the fan experience at home," Lake Forest College economics professor Rob Baade said.

Last year's league-wide attendance was almost 17 million people -- but that's down 3 percent from 2007.

What's increased is the price of the overall experience. One study estimated a game cost a family of four $459 on average, including tickets, parking and food.

"That's what they're struggling with," he said. "How can we make this experience memorable and unforgettable? How can we create an ambiance that will bring people back to the stadium?"

To meet that challenge, the league has encouraged franchises to customize venues -- everything from food to Wi-Fi connectivity.

The New England Patriots have sold out every home game at Gillette Stadium since 1994.

They partially credit stadium upgrades like allowing fans to watch instant replays on their smartphones.

Levi's Stadium in Santa Clara, California, the brand new home of the San Francisco 49ers, has 1,200 Wi-Fi access points, some tucked beneath seats, to keep tech-savvy fans connected to their smartphones.

But not every team can build a brand new stadium.

"We have to work really hard to make sure that it's a distinctly different and a better experience than staying at home and watching the game on TV," said Jaguars president Mark Lamping.

The franchise invested more than $63 million in their stadium.

Updates include two, 363-foot video boards, the largest in the world. Stretching across each end zone, the boards are as long as the field itself.

They've even integrated social media connectivity so fans can see their posts up on the boards.

In the south end zone, the Jaguars built the "fan cave" to attract the booming market of fantasy football fans.

"We've got live football here and the replay right in front of us," fan Tara McCool said.

Near midfield, fans can reserve a table for four and order dinner.

In the north end zone, the team removed 7,700 seats and built football for Floridians.

There are 14 party cabanas, and two pools, watched by lifeguards, that look down on the field.

"We have to make sure that there is the right value proposition for our fans, when they spend their hard earned money to come an NFL game here in Jacksonville that they believe that they are getting a great value in return," Lamping said.

But as any fan knows, there's nothing like a winning team to sell out a stadium.