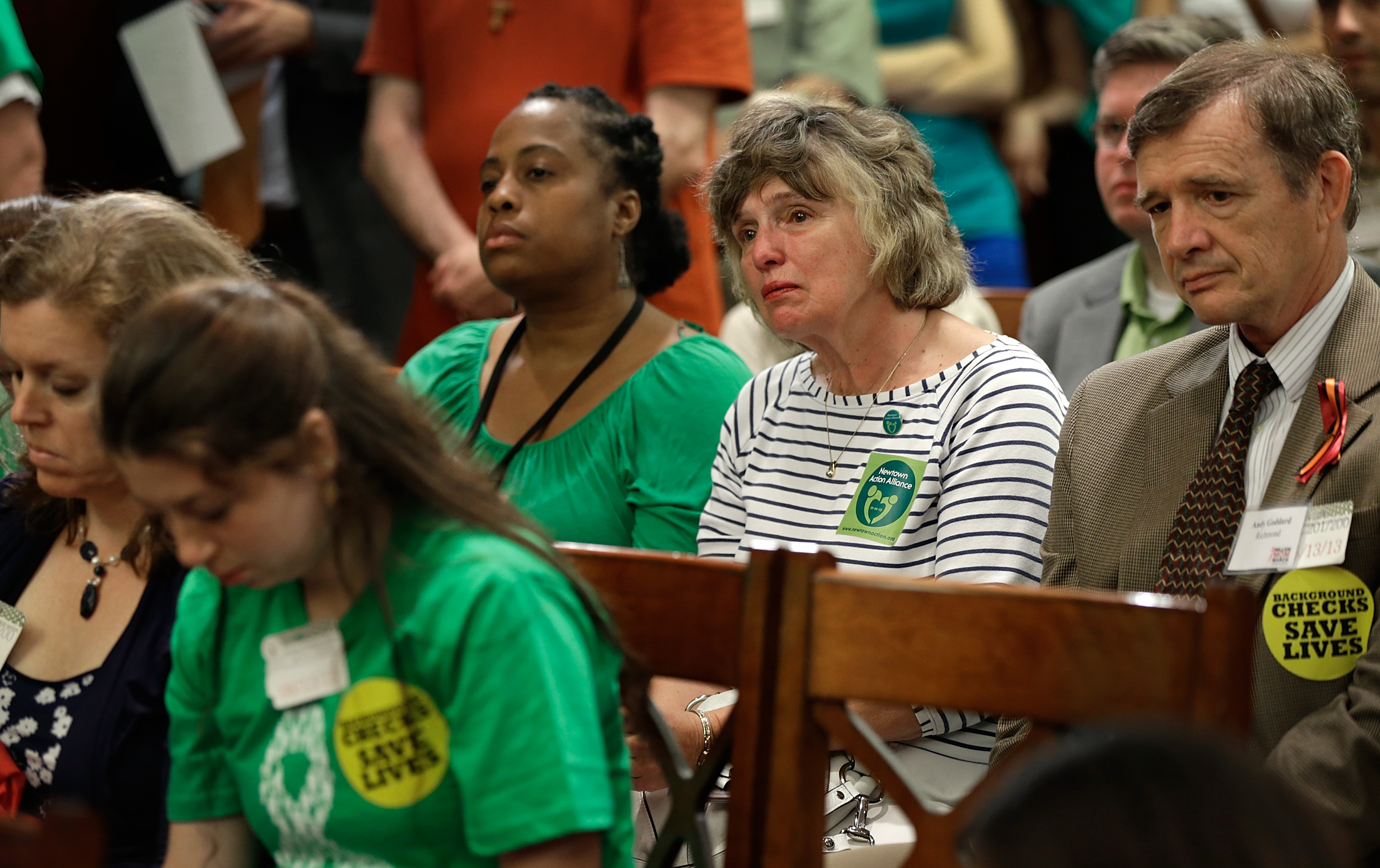 Friday marks six months since the mass shooting at Sandy Hook Elementary School in Newtown, Conn., and the families of the Newtown victims are back in Washington, D.C., reviving a push for Congress to take up gun control.

Thursday, President Obama and Vice President Joe Biden met with the families at the White House.

"And we want them to know that, as we approach the six-month anniversary of that terrible day, we will never forget and we will continue to fight alongside them."

After lobbying members of Congress at their Washington offices on Tuesday and Wednesday, the Newtown families on Thursday held an event at the Capitol to remind lawmakers and the nation of the tragic Dec. 14 shooting -- and all the gun violence that has occurred since.

They read the names of the names of the 4,800 people who have been killed by gunfire since Newtown, as well as held a press conference with Senate Majority Leader Harry Reid, D-Nev., House Minority Leader Nancy Pelosi, D-Calif., and other members of Congress. Following that, the families formed a human "ribbon of remembrance," observed a moment of silence, and then continued reading the names of gun violence victims.

"It's been the longest six months in my entire life but also the shortest," Nicole Hockey, whose six-year-old son Dylan Hockley was killed at Sandy Hook, said at a press conference Wednesday. "Getting to this six month mark, it also just -- we are committed, completely committed, to seeing this through... And the more time that goes by, in some respects, the stronger we're getting."

The push for legislation to reduce gun violence all but died on April 17, when the Senate rejected a proposal -- drafted by a Democrat and Republican who both had "A" ratings from the National Rifle Association -- to expand background checks for gun purchases. That, however, hasn't left Reid or the Newtown families any less motivated.

"The fight is not over, it's just beginning," Reid said, invoking his own father's suicide during his remarks.

"The writing is on the wall," he added. "Background checks will pass the United States Senate. The only question is when."

"I feel every single morning when I wake up just as disgusted as I did" on April 17, Erica Lafferty told reporters Wednesday. Lafferty's mother Dawn Hochsprung was the principal of Sandy Hook and was killed in the shooting.

"For the past six months, I've been living without my best friend, without my mom," she said. "That's happening to 33 additional families every single day, and it will continue to happen until Congress decides to make a change."

Standing with some of the families in the halls of Congress Wednesday, Sen. Joe Manchin, D-W.V., one of the authors of the background check bill, said the issue is "still on a front burner."

The fact that the background check couldn't pass, even though it enjoyed bipartisan support in Congress and widespread support from the public, "shows the toxic atmosphere that we live in, day in and day out, here in Washington, that politics trumps everything," Manchin said.

Manchin told the Newtown families, "As you meet with our fellow senators and anybody who might not have supported the bill in the past, if there is something we can do to clarify the language to make it better understood, to make clear of what our intent would be -- if they will communicate that with you, it would help immensely."

The senator said he's asked Reid to put the legislation up for a "clean" vote, unattached to any other pieces of legislation. The majority leader has been "very receptive" to that approach, Manchin said.

Support continues to come from the White House as well. Vice President Joe Biden will host a White House event on the issue next week -- the first public event on reducing gun violence since the background check bill failed in the Senate.

"I think it is important to understand that the commitment of this president and the vice president to taking action to reduce gun violence is as strong today as it was at the beginning of the year and in the wake of Newtown," White House spokesman Jay Carney said to reporters Wednesday. "The president made clear his deep disappointment with the decision of the minority of senators to flout the will of the vast majority of the American people -- the majority of Republicans, Democrats and independents -- in states across the country."

New York City Mayor Michael Bloomberg and the organization he co-chairs, Mayors Against Illegal Guns, are also renewing their efforts.

Bloomberg on Wednesday sent New York Democratic donors a letter, asking them not to donate to the campaigns of Democratic Sens. Mark Begich, Alaska; Mark Pryor, Ark.; Heidi Heitkamp, N.D.; and Max Baucus, Mont.; because of their votes against the background check bill. The letter doesn't acknowledge that Baucus is not running for reelection or that Heitkamp isn't up for reelection until 2018.

The National Rifle Association, for their part, is fighting back against Bloomberg and targeting Manchin with a new TV ad, which urges West Virginia voters to call Manchin's office and tell him "to honor his commitment to the Second Amendment."

The ad also ties Manchin to Bloomberg and President Obama, who's extremely unpopular in West Virginia.

Mayors Against Illegal Guns, meanwhile, is launching a national bus tour on Friday to keep the issue alive. The tour will go through 25 states in 100 days, stopping in states where activists want to "thank" senators for supporting the background check bill, as well as states represented by senators who opposed it -- such as New Hampshire. Mayors Against Illegal Guns has put intense pressure on Sen. Kelly Ayotte, R-N.H., for her vote against the bill.

Lafferty told reporters that when she confronted Ayotte about her vote, "I got a very condescending and kind of nonsensical answer from her, but I'm absolutely continuing to put the pressure on her, as well as all the other senators" who voted the bill down.