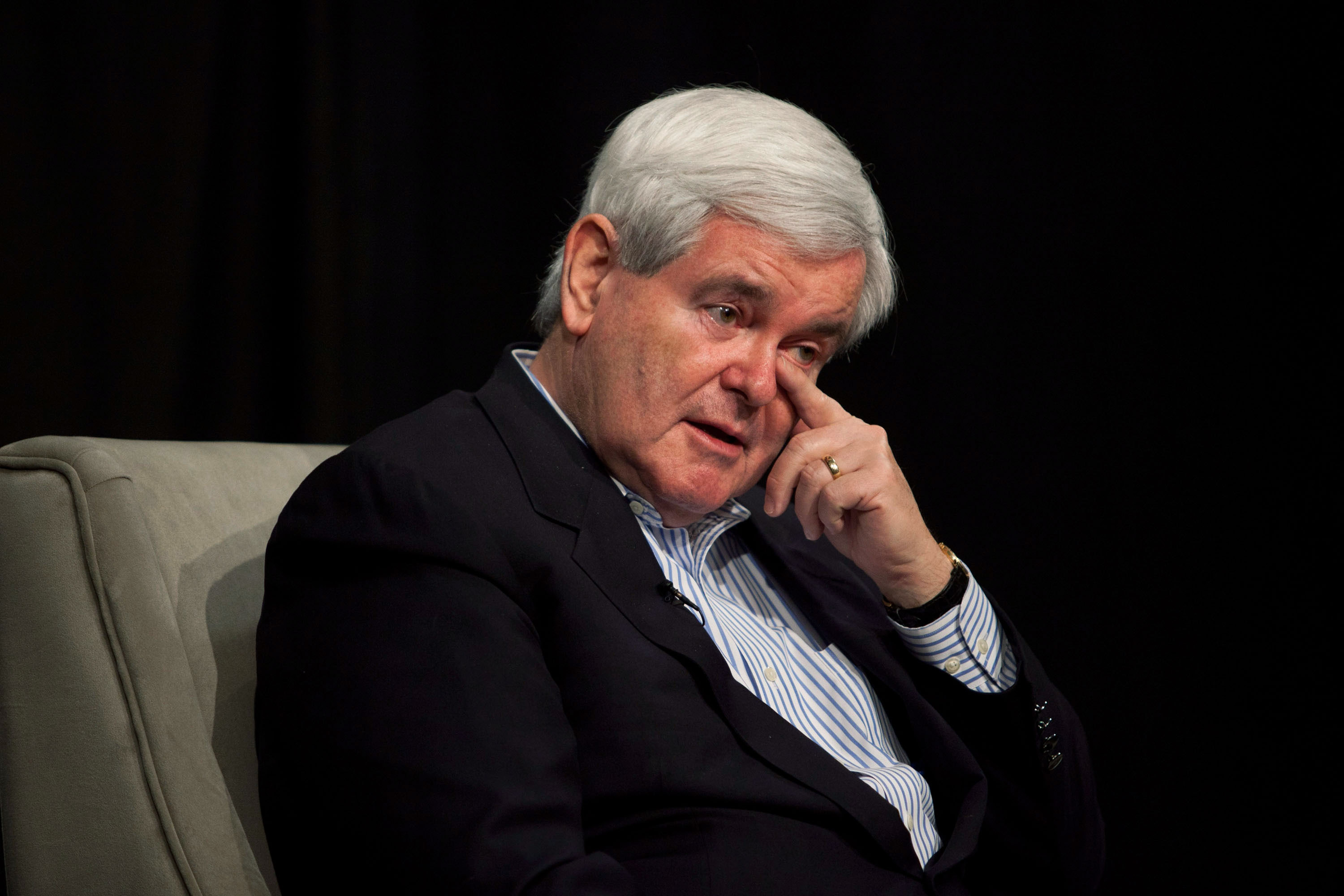 DES MOINES -- Republican presidential candidate Newt Gingrich broke down in tears when asked about his mother at a campaign stop at a coffee shop here Friday.

Asked by pollster and Republican consultant Frank Luntz talk about a "special moment" he remembers about his late mother, Gingrich first responded, "first of all, you're going to get me all teary-eyed - Callista will tell you, I get teary-eyed every time we send Christmas cards."

He then started crying, prompting many in the audience - made up mostly of mothers - to say, "awww." Luntz is known for asking questions to get answers based on emotion, telling PBS' Frontline in 2003 that 80 percent of life is emotion to intellect's 20 percent.

"But, uh -- excuse me - my mother sang in the choir," he said, speaking over a crying baby in the audience. "And loved singing in the choir. And I don't know if I should admit this, but when I was very young, she made me sing in the choir."

He went on to discuss how his mother, Kathleen Gingrich, is someone who he remembers "loving life" and "having a sense of joy in her friends." He then talked about how she lived in a long-term care facility toward the end of her life, which led him to emphasize brain science and other issues in his public life.

As he talked about what he called "the real problems of real people in my family," he began crying again. Gingrich's comments prompted enthusiastic applause from the audience. Later, one of his daughters brought him a tissue to wipe his eyes.

Gingrich went on to discuss how his mother spent "27 years as an army wife" as part of a culture that valued patriotism and duty. He said that if his mother were here today he would tell her he would "do everything I can as a candidate to be worthy of ourselves."

Gingrich's remarks came at the end of an hour long question and answer session with about 150 Iowa mothers at Java Joe's coffeeshop in Des Moines. It was his second stop of the day on his campaign tour around Iowa ahead of the January 3 caucuses.

Earlier in the question and answer session with Iowa mothers, Gingrich was asked to convince the audience that his claimed personality change after two divorces and a history of infidelity reflect a "fundamental change of the heart and not just political talk."

"I don't know that I can convince you," he replied. "I can be a witness and you have to decide whether you're convinced."

"I would say that I am a sadder and slower person than I was 25 years ago," he continued, saying he used to believe that if he moved fast enough things would work out the way he wanted.

"I don't ask people to vote on whether or not they approve of my entire life," he added, saying he wants them to instead consider whether they want to support a "68-year-old grandfather" who has spent over half a century studying what the country needs "and how to get it done."

He said his "willingness to endure the beating" he's taking in terms of negative ads in Iowa speaks to his character, noting a finding that nearly half the ads in Iowa have been attacks on him.

"Just the willingness to stand there and take that, because I think the future's that important, that says something about which of the candidates has character, and which of the candidates doesn't," he said. "Now I'll let you decide if the person who has been honest and straightforward and positive has more character than the person that hired guns to go out and run ads that are false and misleading."

Of the negative ads, he added, "I wouldn't vote for the person they're describing."

Asked about polls suggesting Mitt Romney is seen as the more electable candidate, Gingrich said his performances in the Republican debates demonstrate that he is more likely to defeat President Obama in a general election.

"It's October of next year, Obama has a billion dollars to spend on the kind of negative advertising you've been watching here over the last few days. It comes down to a series of debates," he said. "Who do you think could go on that platform against Barack Obama and effectively articulate your values, defend your beliefs and communicate his failures to the country?"

At another point, Gingrich was asked if a "bold leader" can compromise after having described himself as precisely that.

"You don't necessarily have to compromise but you have to have a way to have a win-win system," he responded, pointing to his efforts to get House Republicans to pass a bill from Virginia Senate Democrats to expand offshore drilling.

Gingrich was also asked if he would ask former British Prime Minister Margaret Thatcher to be his running mate if she were "here today" and 30 years younger.

"If Margaret Thatcher were here today and 30 years younger, I would ask her to consider me as her running mate," he replied.