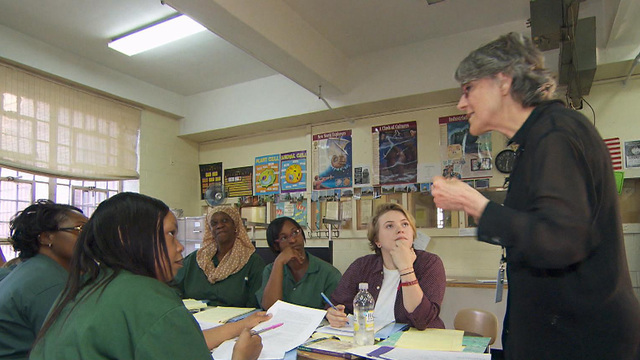 President Obama became the first sitting president to visit a federal prison last year, as he sought to build support for criminal justice reform. While it seemed to have bipartisan support in Congress this year, it now appears to be stalled amid the intensifying election campaign.

But one state is moving ahead with a controversial plan to expand a rehabilitation program for some of its prison inmates, reports Mark Albert.

Inside Building 82, down the hall from the cosmetology course, Columbia University Professor Christia Mercer is teaching philosophy.

If education is said to free the mind, it is the only freedom a group of particular students in Bedford Hills, New York have. These students are inmates at the Taconic Correctional Facility in Bedford Hills.

"So having done Plato and thought about early Christianity, Roman notions of virtue, we now have a chance to really think seriously about Augustine and his views, and I think it's really pretty mind-blowing, right?" Mercer asked the class.

Perhaps more "mind-blowing" is the transformation from prisoner to pupil. Cecile Davidson is serving one to three years for grand larceny.

"Right now we're working on Plato, Socrates, and just the thought, the mindset of Socrates before he went into prison," Davidson said.

"I believe Plato. I believe that if you separate the body from the soul, you can obtain that truth," said another student, Leah Faria, whose "truth" includes a second-degree murder conviction.

Faria has been incarcerated 19 years and goes before the parole board for the first time in 2018.

"You know, it's going to be bad enough I'm leaving prison with a felony -- homicide at that! The worst of the worst, so I have to be prepared," Faria said. "I have to basically, I say armored up, you know, to go back into society so I can be a success."

"Does knowledge give you that armor?" Albert asked.

Faria is one of nearly 900 students enrolled throughout New York state prisons in an education program, offering associates, bachelors and even Master's degrees from some of the country's most elite universities.

Twenty-two colleges and universities - including Columbia, Bard, Cornell and Vassar - send professor behind walls in the empire state every week.

Easy, because Mercer does not change the course much, even in a prison system where 50 percent of the inmates - one out of every two - didn't graduate from high school.

"We did teach Aeschylus and Euripides and so on ... so I am not lowering my standards at all," Mercer said. "That would be an insult to them."

In fact, Mercer - a distinguished member of the faculty at one of the most prestigious universities in the land - admitted that even she has been schooled while behind bars, when teaching the play "Twelfth Night" by Shakespeare.

"In all my years of thinking about the play, I've never heard anyone give an argument for why it was inappropriate to treat Malvolio in the way that he was treated," Mercer said. "It was just this astonishingly insightful analysis of this play in ways that I had never thought of before.

"So what you are learning with these students in person is affecting how you teach here at Columbia?" Albert asked.

"Absolutely. Constantly. And also how I think about the world," Mercer said.

This fall, New York's education program will expand, over the objections of state lawmakers, who rebuffed Gov. Andrew Cuomo's request for more money.

So instead, Cuomo teamed up with Manhattan District Attorney Cy Vance to divert $7.5 million in criminal forfeiture money to add at least 800 more students.

"This is a public safety issue. I know that data supports my decisions and therefore, I think the citizens of the state should understand that this makes sense in terms of community safety," Vance said.

According to the state, 39 percent of New York's inmates commit another crime once they get out. But with a college degree from the program, the recidivism rate slides to 16 percent - a drop of more than half.

"They don't come back into our system. And that's really how we know it works," said Linda Hollmen, director of education for New York's Department of Corrections and Community Supervision.

Sean Pica was 32 when he first walked out the front door of the notorious Sing Sing Prison. After being locked away for 16 years, he said it is still a "bit surreal."

The son of two police officers, Pica had spent half of his life imprisoned here after killing a friend's father.

Pica began taking classes in prison while still a teenager. The first in his family to go to prison also became the first to get a college degree.

Now, he has three. And, in a surprise to many of the guards who used to watch over him, Pica now coordinates the education program at five prisons, including the one he lived in for so long.

"How are you back here? If I had served so many years in prison and somebody asked me to come back, I would have run as far away as possible," Albert said.

"It's tricky. It's tricky to come back to this place every day," Pica answered. "But it's good. It's good. I got the best job in the world."

Pica is a lesson in endurance and commitment - themes Plato wrote about that the Ivy League students in Building 82 at Taconic now study and draw inspiration from, including Leah Faria.

Faria said when she is released, she plans to continue her college career at Columbia.