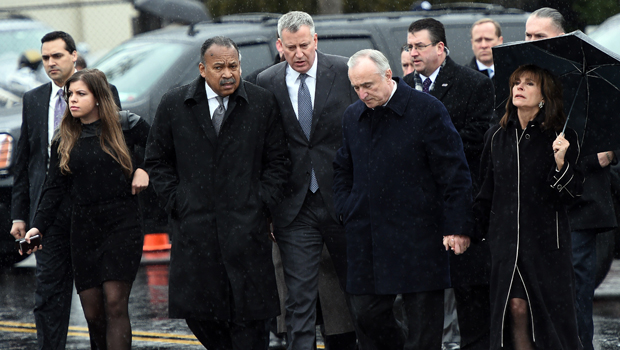 NEW YORK -- Hundreds of police officers from across the country streamed into the wake of a slain New York City officer on Saturday, and Gov. Andrew Cuomo said his late father would have wanted him there after "really pointless" killings.

The uniformed police officers showed respect rather than disdain for Mayor Bill de Blasio when he arrived with Police Commissioner William Bratton, with some saluting as the men entered at the start of the daylong event for Officer Wenjian Liu.

"This is a really tragic story," said Cuomo, who attended the wake two days after the death of his father - former New York Gov. Mario Cuomo.

He noted that Liu and his wife were newlyweds who had just moved into a home months into their marriage.

"She's now a widow," he said. "This is really pointless. It had nothing to do with them. They did nothing wrong. It wasn't about them. It was pure and random hatred."

Cuomo also expressed his own sorrow.

"Today is not the day for my dad, but I can say I miss him already. There's a hole in my heart," he said.

Liu was shot to death in his patrol car two weeks ago along with Officer Rafael Ramos, whose funeral was last week. Their killer committed suicide soon after the shooting.

For de Blasio, the gesture of respect during the wake contrasted with the back-turning insults hundreds of officers displayed last week toward video screens showing the mayor speaking at Ramos' funeral. Bratton had urged rank-and-file officers to refrain from making political statements at Liu's wake and funeral.

"A hero's funeral is about grieving, not grievance," Bratton said in a memo read to all commands at roll calls Friday and Saturday. "I issue no mandates, and I make no threats of discipline, but I remind you that when you don the uniform of this department, you are bound by the tradition, honor and decency that go with it."

Police union officials, who are negotiating a contract with the city, had accused de Blasio of helping foster an anti-police atmosphere by supporting demonstrations following the chokehold death of an unarmed black man on Staten Island who resisted arrest.

The back-turning at Ramos' funeral mimicked what some police union officials did outside a hospital when the officers were killed two weeks ago.

Jeanne Zaino, who teaches campaign management at New York University, told CBS News correspondent Jericka Duncan that it's important for the police and the mayor of the largest city in the United States to get along.

"The mayor's first responsibility is the safety and security of the city, and he is dependent on the police in order to fulfill that goal," Zaino said.

But she didn't think that de Blasio needs to apologize.

"I do think it would serve him well to say that 'If I have given any indication that I am less than fully committed to the officers in this community, the safety of the community I apologize for that,'" she said.

Liu and Ramos were ambushed in their patrol car on a Brooklyn street by Ismaaiyl Brinsley. Brinsley had made references online to the killings of unarmed black men at the hands of white police officers, vowing to put "wings on pigs."

Investigators say Brinsley was an emotionally disturbed loner who started off his rampage by shooting and wounding an ex-girlfriend in Baltimore.

The police killings ramped up emotions in the already-tense national debate over police conduct. Since Ramos and Liu were killed, police in New York have investigated at least 70 threats made against officers, and more than a dozen people have been arrested.

Liu's funeral was scheduled for Sunday with a Chinese ceremony led by Buddhist monks to be followed by a traditional police ceremony with eulogies led by a chaplain. Burial will follow at Cypress Hills Cemetery.

The 32-year-old officer had been on the police force for seven years and had gotten married two months before he was killed. His widow, Pei Xia Chen, spoke tearfully days after the shooting.

Liu's funeral arrangements were delayed so relatives from China could travel to New York.

Uniformed officers from across the country were among the first in line Saturday at Liu's wake. About 20 officers from the Los Angeles Police Department traveled to Brooklyn to pay their respects to the fallen policeman.

Luda Kaplan, 67, of Brooklyn, carried a handmade sign with a heart and "NYPD" on it as she stood across the street from the funeral home. She said her son-in-law was an NYPD officer for 20 years.