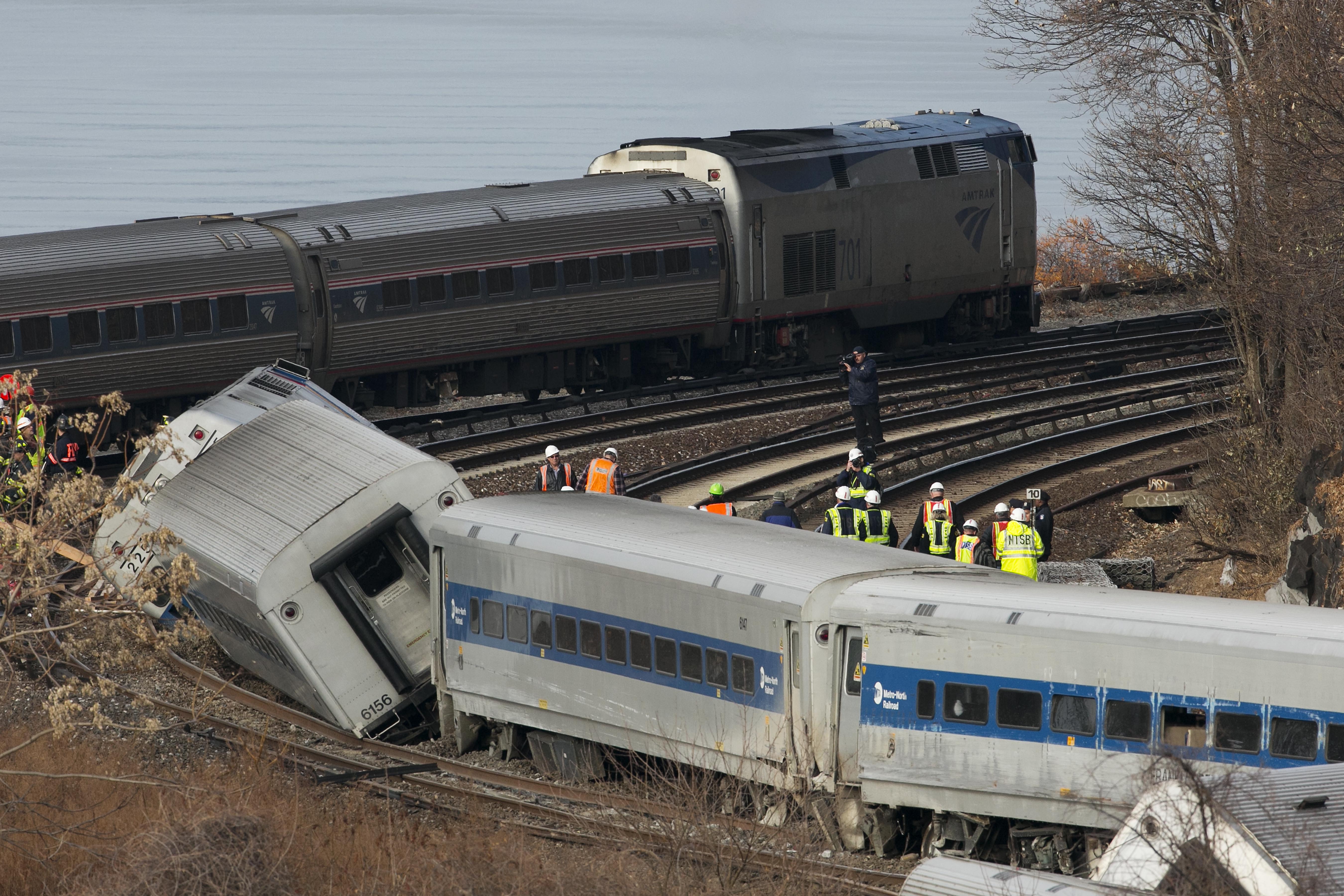 YONKERS, N.Y. -- The revelation that a New York City commuter train derailed while barreling into a sharp curve at nearly three times the speed limit is fueling questions about whether automated crash-avoidance technology could have prevented the deadly disaster.

National Transportation Safety Board member Earl Weener said Monday that the Metro-North Railroad train was going 82 mph as it entered a 30 mph turn and derailed Sunday. Four people were killed and more than 60 others were injured.

Investigators haven't determined whether the cause was human error or mechanical trouble. The train's engineer, William Rockefeller, a 20-year MTA veteran, told first responders at the scene he hit the brakes as he was approaching the curve, but they didn't work. However Earl Weener with the NTSB said: "This train made nine stops prior to derailing. At this point we are not aware of any problems or anomalies with the brakes."

Still, some safety experts say the tragedy might not have happened if Metro-North had what's called positive train control (PTC) technology.

The wreck came just two years before the federal government's deadline for Metro-North and other railroads to install the automatic-slowdown technology, which is designed to prevent catastrophic accidents. CBS News correspondent Ben Tracy reports Congress ordered the system be installed across the country after a commuter train slammed head-on into a freight train in Chatsworth, California, in 2008, killing 25 people in one of the deadliest train wrecks in that state’s history.

Congress passed measures requiring PTC be installed on 60,000 miles of rail lines in the U.S. at a total cost of about $10 billion. Jeff Lustgarten with Metrolink in California told CBS News the “life saving technology” is worth it. He described it as “a very elaborate state of the art GPS-based technology, which allows our trains to be controlled remotely."

Every train is linked to a central system. Thousands of antennas on tracks and signals on trains monitor precise location and speed. If a train is on course to collide with another train or is going the wrong way or is going to too fast into a curve such as the train in New York, the system warns the conductor, showing exactly how long it will take to slow down and avoid an accident.

"If that engineer for whatever reason does not reduce the speed of the train the system will do it for him," Lustgarten said.

But with the cause of Sunday's wreck still unknown, it was not clear whether the technology would have made a difference.

Metro-North's parent agency and other railroads have pressed the government to extend the deadline a few years because of the cost and complexity of PTC technology.

"Assuming the braking system was working normally, this crash would not have happened" if a PTC system had been in place, said Grayd Cothen, a former safety official with the Federal Railroad Administration.

He said the system would probably have alerted the engineer to the speed of the train and the approaching curve, and if the engineer had failed to brake manually, the PTC would likely have forced the train to stop.

Another former FRA official, Steve Ditmeyer, echoed those remarks to NPR, telling the radio network "a properly installed PTC system would have prevented this train from crashing."

"If the engineer would not have taken control of slowing the train down, the PTC system would have," Ditmeyer told NPR.

The NTSB has been urging railroads for decades to install the technology. Congress in 2008 required dozens of railroads, including Metro-North, to install the PTC systems by 2015.

The Metropolitan Transportation Authority, which runs Metro-North, awarded $428 million in contracts in September to develop the system for Metro-North and its sister Long Island Rail Road. But the MTA has asked for an extension on the deadline to 2018, saying it faces technological and other hurdles in installing such a system across more than 1,000 rail cars and 1,200 miles of track.

MTA and other railroad entities who are behind in implementing PTC blame the cost and size of the project.

"Thousands and thousands of pieces of equipment that must be retrofitted and thousands of miles of railroad all over the country to roll out at one time," said Kathy Waters with the American Public Transportation Association.

Many are asking Congress for a three-year extension. Mark Rosenker, former chairman of the NTSB, says that's a mistake.

"We run the risk of seeing during that period a number of accidents which could have been prevented,” Rosenker said. “That's why it’s so important to make sure we hold their feet to the fire."

Sen. Richard Blumenthal of Connecticut, which is also served by Metro-North, said he agreed with Rosenker.

"This incident, if anything, heightens the importance of additional safety measures, like that one," Blumenthal said. "And speaking for myself, I'd be very loath to be more flexible or grant more time."

Margie Anders, a spokeswoman for Metro-North's parent, the Metropolitan Transportation Authority, said that the agency began planning for a PTC system as soon as the law was put into effect.

"It's not a simple, off-the-shelf solution," she said.