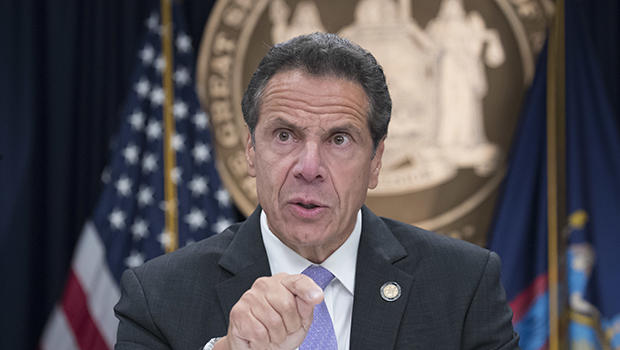 New York Gov. Andrew Cuomo, who was considered a potential Democratic contender in the 2020 presidential election, says he's not running. In an interview with "The Brian Lehrer Show" on Tuesday, Cuomo said that he was "ruling it out," and that he was "going to be here doing the job of governor."

Cuomo previously said during a debate with primary challenger Cynthia Nixon in August that the only thing that would prevent him from completing his third term in office, which ends in 2022, is if "God strikes me dead."

"Nothing has changed in my calculus," Cuomo said on Tuesday. "I have my own expectation of the candidate of what the Democratic Party needs to win. I think you'll see a viable candidate in the Democratic field."

He said that it was not enough to have a candidate that was "anti-Trump," but have someone who could present a "positive" Democratic policy program.

Cuomo also said that he was meeting with President Trump to discuss infrastructure this week.

The governor of Mr. Trump's home state, Cuomo has previously tussled with the president. He became a target of the president in August after saying at at a bill signing that America "was never that great." The governor was attempting to make a larger point about women's equality, but the context was lost in the reaction to his first sentence.

"Big pushback on Governor Andrew Cuomo of New York for his really dumb statement about America's lack of greatness. I have already MADE America Great Again, just look at the markets, jobs, military- setting records, and we will do even better. Andrew 'choked' badly, mistake!" Mr. Trump tweeted the following day. He also mentioned Cuomo's gaffe in subsequent campaign appearances.

Cuomo then said in a conference call with reporters that he had used an "inartful" expression. "I want to be very clear. Of course America is great and of course America has always been great," Cuomo said.

New York is home to a few potential presidential contenders, not including the president. Sen. Kirsten Gillibrand, a Democrat, and former New York City Mayor Michael Bloomberg are both exploring presidential bids in 2020.